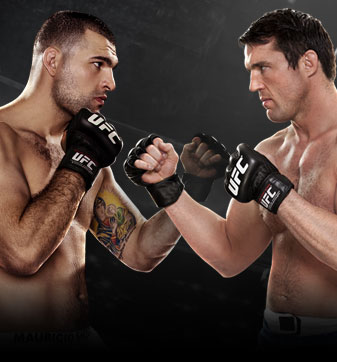 The UFC will land in Boston this weekend for the second time in the promotion’s history when UFC Fight Night: Shogun vs. Sonnen helps launch the first day of the new FOX Sports 1 network, and what's on tap could be one of the biggest non-Pay-Per-View cards ever to grace the small screen.

The main event will feature former UFC and PRIDE champion Mauricio "Shogun" Rua looking to erase the memory of his last fight against Alexander Gustafsson when he takes on the Kevin Garnett of MMA trash talk, Chael Sonnen.

The heavyweight division will also cause the TD Garden to shake and shimmy when Alistair Overeem faces off with fellow heavy hitter Travis Browne.

With the FS1 card showcasing a whopping 10 fights in total, we will be breaking our fantasy preview up into two parts, with part one hitting the main event and a few other key fights, and part two looking a little further down the card.

1)    The main event this time around is as close as a fight can get on paper. While Chael Sonnen hasn't had nearly the experience at light heavyweight as Mauricio "Shogun" Rua, styles make matchups and this is a good one. Sonnen is a wrestler and never hides that fact from anybody. He averages 4.27 takedowns for every 15 minutes he's in the cage, and has 35 to his credit—the most in middleweight history. Sonnen is tenacious when getting a fighter to the mat and doesn't give up easily until they are planted on the canvas, and his head is buried in their chest. On the other side of the Octagon, Shogun Rua doesn't have nearly the wrestling credentials and it shows. His takedown defense is only 34.3 percent, which means he's not stopping many shots.

All that said, Shogun is still a beast even when he's facing wrestlers. He's taken on a huge list of them throughout his career, including Dan Henderson, Mark Coleman (twice) and Kevin Randleman. So Rua knows what's coming from Sonnen, now it just comes down to him stopping it. He will enter the fight as a slight underdog according to most bookmakers, who have him at +120 while Sonnen is the favorite at -140. Rua is tenacious, and while his cardio isn't tops in the world, everything he throws has knockout written all over it. Still, he may not get the chance to throw those heavy shots knowing that Sonnen is gunning for his legs at every moment of the fight. If Sonnen can land one of his signature shots early and put Shogun down on the mat and begin systematically pounding away at him, the Brazilian's power will drain down faster than a Mortal Kombat character that can't stop Sub Zero's freeze attack. Sonnen maintains a slight edge here to get the win via decision, but don't discount Rua's experience and toughness to carry him until the final horn sounds.

2)    Expect a lot of striking, but not a lot of rounds taking place when Alistair Overeem meets Travis Browne in the UFC Fight Night co-main event. Overeem has a 94.4 percent finishing rate, while Browne has put away 12 of 14 opponents during his career. In other words, the judges can take the night off. Overeem's history as one of the most prolific strikers in the heavyweight division can't be ignored. He's a former K-1 Grand Prix kickboxing champion, and has some of the heaviest hands and knees in the business. He's landed at a 73.7 percent accuracy clip in his UFC fights so far, but he hasn't faced a striker like Browne yet. Browne throws hard and heavy, especially from a distance, which is where Overeem does not want to be in this fight. Browne might also be one of the few fighters in the division who won't approach Overeem with some kind of healthy fear about what he can do on the feet. Browne will enter the fight as a +170 underdog, with Overeem getting around -215 as the favorite, but this is one upset worth picking. If Browne can keep Overeem away from grabbing him into a clinch and working for knees against the cage, he will control the fight from the outside. Browne is tall, lands with power, and seems ready to jump to the next level of competition in the heavyweight division. This will be his chance to impress, and he should do well on Saturday night.

3)    Urijah Faber is a pretty big favorite going into his fight against Iuri Alcantara, and there's good reason for it. It was stated before Faber's last fight in the UFC, but it can't be emphasized enough—he's never, ever lost in a non-title fight. In other words, if you erase Faber's title fight losses, he would be an undefeated mixed martial artist. That's a pretty amazing accomplishment given how long he's been at this game. He's a -280 favorite this time around, and while Alcantara is definitely a game opponent who has fought as high as lightweight in the past, the odds are just not in his favor. Faber is as good as they come in the bantamweight division, and he's extremely well rounded with his wrestling, improved standup, and scrambles, with opponents trying to get away usually resulting in him snatching a submission to finish the fight. Faber should cruise here to another win, although Alcantara's toughness may draw it out to a decision.

4)    Matt Brown and Mike Pyle will fight on Saturday night in another of the card’s closest matchups. Brown (-155 favorite) is just slightly ahead of Pyle (+125), but the intangibles are where he looks the best going into the fight. Brown has won five fights in a row, finishing four of his opponents by knockout or TKO. The Ohio native is a dangerous man when he's confident, and this version of "The Immortal" is even better than the one that picked up three wins in a row back in 2008-09. Brown is hitting his stride at a perfect time in the welterweight division when things are being shaken up by runs like his and the resurgence of fighters such as Robbie Lawler. It also has to be noted that throughout the biggest part of his career, Pyle was mostly known as a submission fighter, but lately he's started picking up knockouts (three out of his last four wins). That could haunt him in this fight though. Brown has the highest striking accuracy in welterweight history, and also has more knockouts than any 170-pound fighter on the UFC roster. That spells disaster for Pyle if he decides to stand and trade with the former Ultimate Fighter cast member. Brown is on a roll right now, and it shouldn't stop in Boston, where he could pick up an award for Knockout of the Night if things go his way.