Who were the winners at UFC Fight Night: Dos Anjos vs Ferguson? Click below to get the results for all the fights at Mexico City Arena in Mexico City, Mexico on Saturday, November 5, 2016. 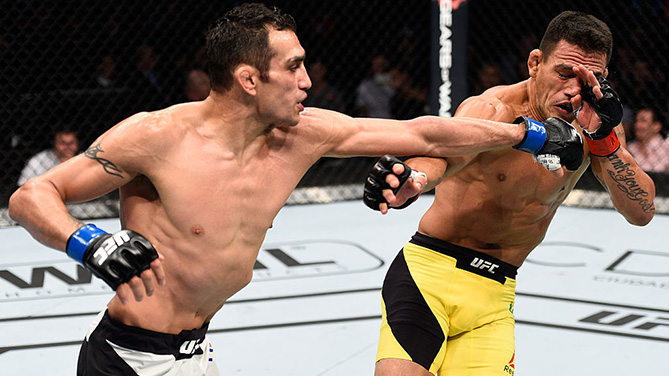 Tony Ferguson picked up the signature win he’s been starving for, landing an unbelievable 199 significant strikes at altitude in Mexico City to secure a unanimous decision win over Rafael Dos Anjos, 48-47, 48-47, 48-47. Ferguson looked to be in trouble after five minutes as RDA was busting his leg up with some brutal leg kicks. But Ferguson turned up the volume in the second round and ended up outstriking RDA in every single round and finishing with an amazing 187-114 total strike advantage and all of those 187 were singificant strikes. Ferguson landed 47 percent of his total strikes thrown and now has extended his winning streak to nine in a row – the longest streak in lightweight history. 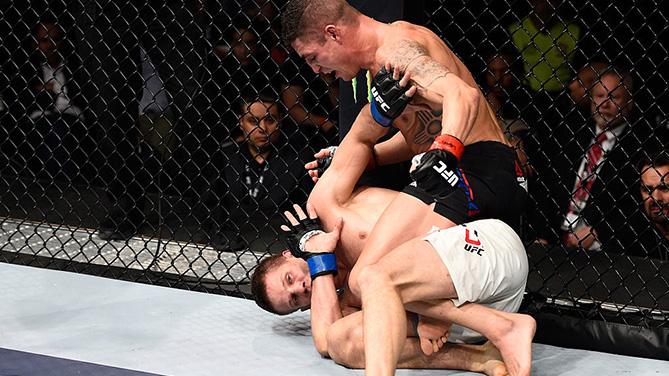 Diego Sanchez passed BJ Penn for fourth all time in fight time inside the Octagon (5:24:23) in his co-main event showdown with Marcin Held. Sanchez also picked up a much-needed victory, outlasting Held in his UFC debut to capture a unanimous decision win, 29-28, 29-28, 29-27. Sanchez controlled Held on the ground for most of the final 10 minutes, racking up 9:26 of control to just 1:41 for Held. Sanchez out-landed Held in the fight, 47-31. 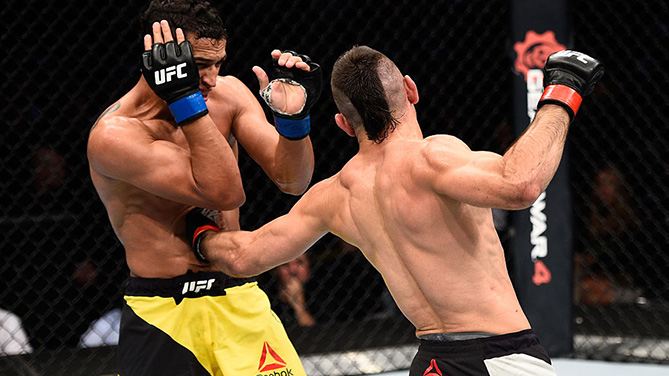 Ricardo Lamas was up against a Charles Oliveira that missed weight by 10 pounds and is an absolute ace on the ground with his Brazilian jiu jitsu. Oliveira almost had Lamas dead to rights in the first with a rear naked choke, but Lamas survived and then came back strong in the second to finish by guillotine choke at 2:13. Lamas now has five finishes which is good for a tie for second all time in the featherweight division. 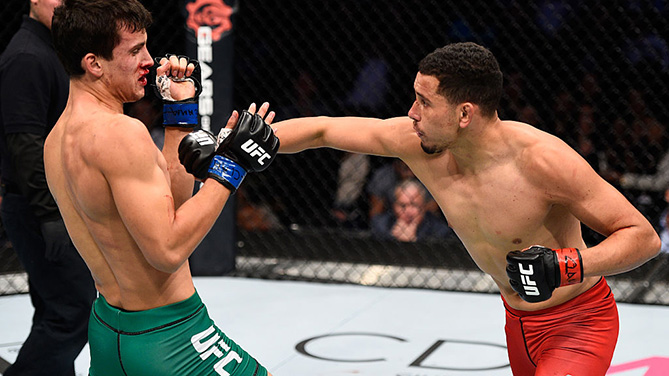 Bravo for Martin Bravo, who took out Claudio Puelles by TKO at 1:55 of the second round. Bravo becomes The Ultimate Fighter LATAM season 3 winner and improves to 12-0 overall with the win. Bravo worked the body against Puelles and it paid off in the second round when he connected with a nice hook to the body that dropped Puelles. Bravo jumped on his opponent and was able to finish the fight. 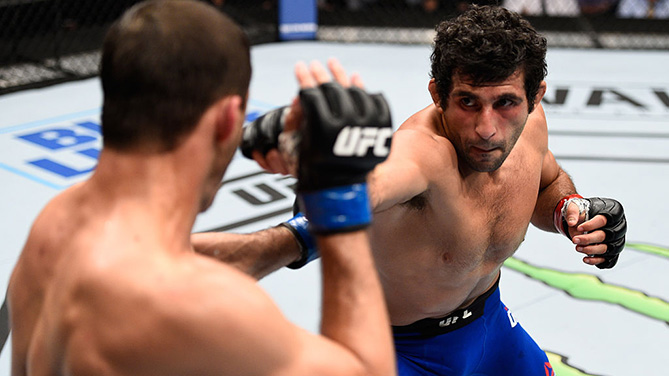 Beneil Dariush won out in a grinder of a fight, taking a unanimous decision win (30-27, 30-27, 29-28) against Rashid Magomedov. Dariush landed more significant strikes, connecting with 60 compared to just 41 for Magomedov, who landed the only takedown of the fight. 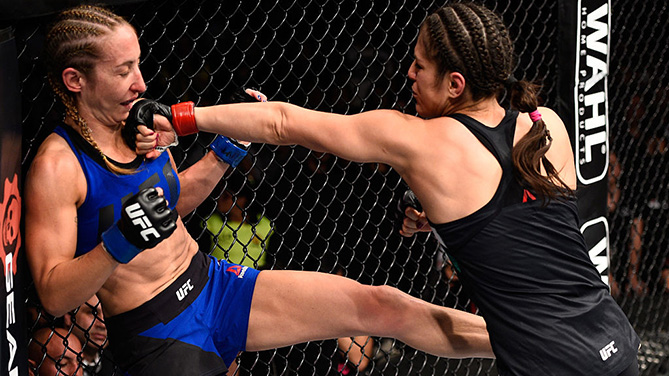 Alexa Grasso impressed in her UFC debut, taking out Heather Jo Clark by unanimous decision, 30-27, 30-27, 29-28. Grasso’s first round set the tone for the fight, as she landed 61-26 in total strikes in the round. Clark was able to weather the storm and survive, but was rocked in the round and never really seemed to recover. Grasso remains perfect and improves to 9-0 overall. 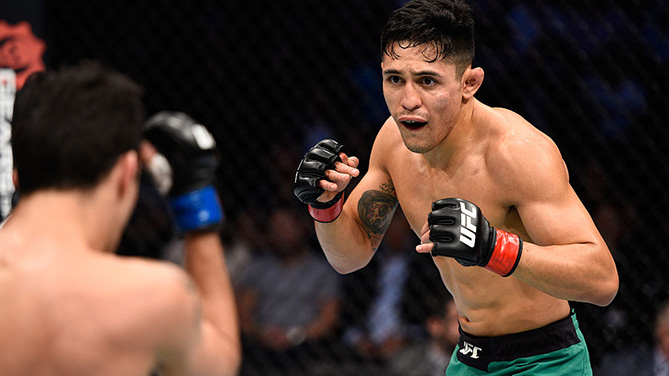 Erik “Goyito” Perez was in serious trouble when Felipe Arantes looked to be close to a heel hook submission finish, but he persevered and broke the lock. Perez was able to out-strike Arantes 103- 42 and land three takedowns to secure the split decision win, 28-29, 29-28, 29-28. Perez extends win streak to three and has now won four of his last five fights overall in the bantamweight division. 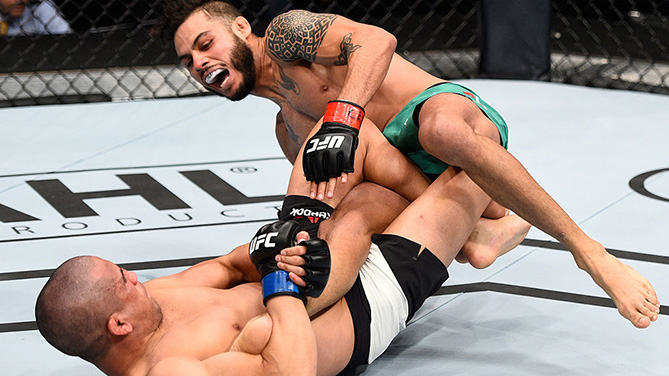 Joe Soto got busted up early in the fight but in a scramble on the ground was able to secure a deep heel hook and finish the fight at 1:37 of the first round. The heel hook finish was the first of its kind in the UFC since December of 2014 when Ian Entwistle pulled off the same submission. 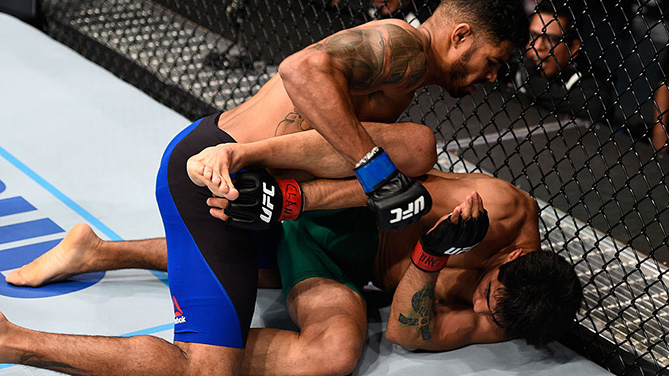 Max Griffin wasted no time against Erick Montano, finishing the fight by TKO at just :54 of the first round. Griffin improves to 13-3 and picks up his first win in the UFC. In under a minute, Griffin landed 15 significant strikes. 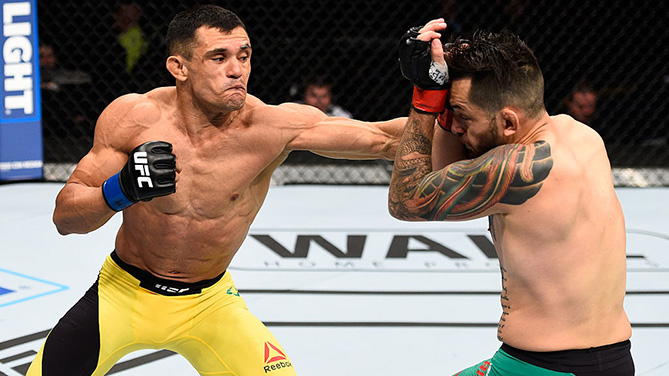 Douglas Silva De Andrade earned the fourth spinning backfist knockout in UFC history when he connected with the finishing blow at 2:33 of the third and final round. Briones was likely up on the judges’ scorecards based on his performance through the first 10 minutes, but Silva De Andrade took the decision out of their hands to win his second fight in the UFC. 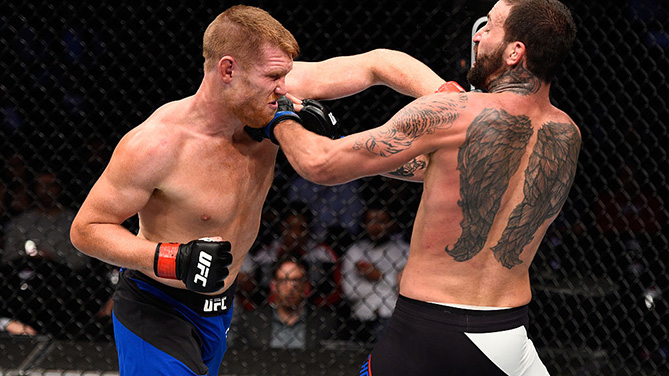 Sam Alvey extended his win streak to three in a row with a unanimous decision win (29-28, 29-28, 29-28) over Alex Nicholson in the main event of the UFC FIGHT PASS prelims. Nicholson actually out-struck Alvey in the fight, but it was a close second round that earned the win for Alvey. No takedowns were landed in the fight and Nicholson landed 82 significant strikes to 63 for Alvey. 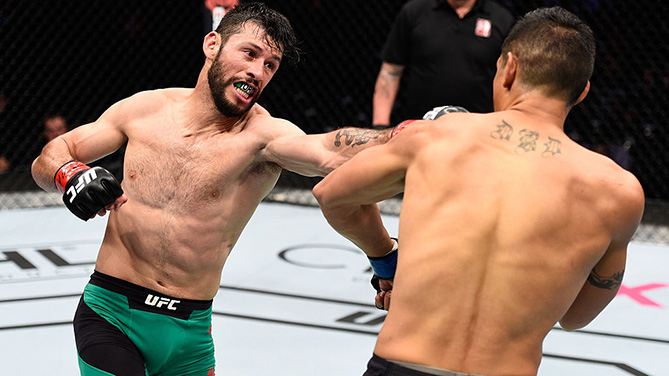 Marco Polo Reyes did enough in the eyes of the judges to pull off a split decision win over Jason Novello, 29-28, 28-29, 29-28. Novelli was able to score a takedown in the fight but Reyes outstruck him (67-51 total strikes; 50-29 significant strikes) and managed 2:25 of total control in the fight compared to just :47 for Novelli. 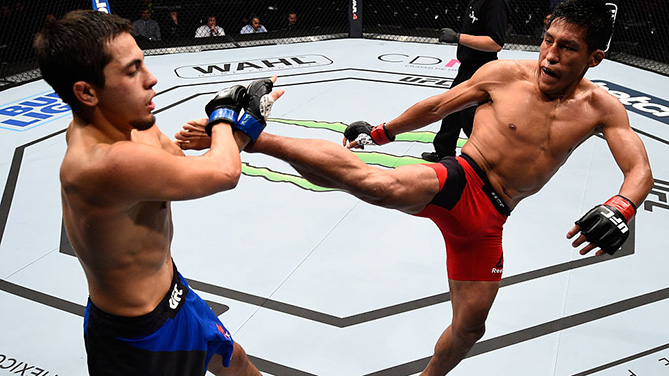