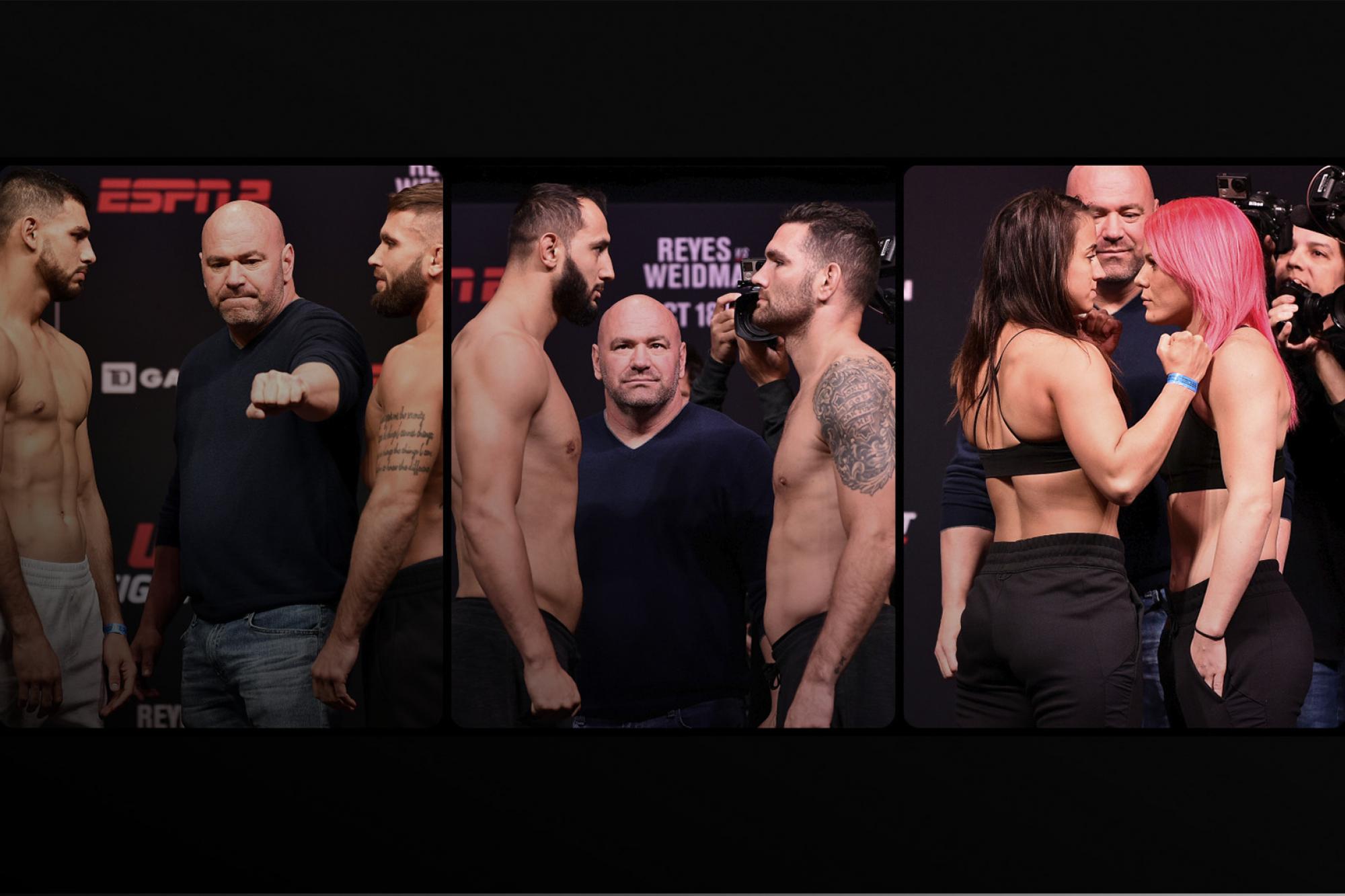 The UFC debut of Edmonton’s Tanner Boser was delayed, but not deferred, and when he got the call to the Octagon in tonight’s heavyweight opener, he delivered, shutting out Daniel Spitz over three rounds.

Undeterred by Spitz’ 6-foot-7 frame, Boser had little difficulty getting his shots off against the Spokane product, and he was able to implement his game plan without reprisal over the 15-minute bout, with his thudding leg kicks an effective weapon throughout.

Brendan Allen def Kevin Holland by submission (rear naked choke) at 3:38 of Round 2

Middleweight prospect Brendan Allen made a smooth transition from the Contender Series to the big show, submitting Kevin Holland in the second round.

It was a wild first round, with Allen initially taking control with a takedown that led to him getting Holland’s back. But when Holland slipped free, he had his turn, first cutting Allen with an elbow and then taking the mount and back positions. But just when it seemed like the “Trailblazer” was going to finish, it was Allen scrambling free and nearly submitting his foe with a rear naked choke and then an armbar.

Holland got a takedown in the opening minute of the second, but Allen stayed busy looking for submissions from his back. Midway through the frame, Allen reversed and got the dominant position, and soon after he sunk in the rear naked choke that forced Holland to tap out at the 3:38 mark.

A left hook by Brady produced a knockdown in the second minute of the opening round, kicking off the scoring for the Philadelphian, and once the now bloodied McGee rose, he began getting tagged more and more by the newcomer.

McGee had a better round in the second, but by the end of the frame, Brady was again jarring the veteran with flush punches. It was more of the same in the third, with McGee staying busy but Brady landing the harder shots, and those harder shots proved to be the deciding factor on the scorecards.

Social Post
Randy Costa def Boston Salmon by TKO at 2:15 of Round 1

After an energetic start to the fight and then a brief spell against the fence, Taunton’s Costa jarred Salmon with a wild left hand, but Salmon steadied his legs after a couple more shots landed. A straight right moments later rocked Salmon again, though, and as the punches kept coming, it was clear that the Hawaiian was in trouble. After a couple more rights, referee Herb Dean had seen enough, stopping the fight at 2:15 of round one.

Fresh from his short-notice win on the Contender Series, Sean Woodson impressed in his Octagon debut, as he shut out Boston veteran Kyle Bochniak over three rounds in featherweight action.

Woodson fought as good a first round as he could have, using every inch of his reach advantage to pepper Bochniak with jabs from long range. And when “Crash” got too close, uppercuts and knees kept him honest. Two minutes in, Bochniak got a quick takedown, but Woodson didn’t stay down long, and with a minute left he landed the best shot of the round, a flush knee that nearly dropped Bochniak.

Bochniak was able to slow the fight down a bit in the second stanza thanks to more grappling exchanges, but he was unable to keep Woodson tied up long enough to take a round where the St. Louis product’s striking continued to control matters. The third was no better for Bochniak, and while the local favorite was game until the end, Woodson’s flush knees kept him from getting into the fight.

Belbita acquitted herself well in the opening round, staying busy as she pumped out her jab and kicks to the leg. McCann’s response came in the form of bad-intentioned hooks and crosses, and at the end of the round, she surged with a takedown and some hard ground strikes.

McCann went back to her grappling attack in the second, and Belbita wound up losing a point for multiple fence grabs. That was the least of her problems, though, as McCann kept the pressure on, and when she got the Romanian to the mat, she unleashed a barrage of ground strikes until the gutsy Belbita got back to her feet with under a minute left.

Fatigue had set in for the two flyweights in the third, but they still battled it out on the feet, with McCann holding the edge until the final horn.

Social Post
Charles Rosa def Manny Bermudez by submission (armbar) at 2:46 of Round 1

In a clash of local featherweight standouts, Charles Rosa returned from an over 30-month layoff to submit Manny Bermudez in the first round.

Bermudez got the fight to the mat in the first 30 seconds, and he then began unloading strikes from the top position. Rosa tried to work for a submission from his back, and out of nowhere, he locked up Bermudez’ arm and forced a verbal tap at 2:46 of round one, sending the crowd into a frenzy for “Boston Strong,” who picked up his first win since January 2016.

Winn took some shots on his way to his first takedown, but he ultimately got it, and while Stewart got back to his feet, the Gilroy product used a sharp right hand to set up a second takedown and then a third with a minute left. Stewart did use an elbow from his back to cut Winn, but the round still belonged to the wrestler.

After taking a low kick early in round two, Winn put the fight back on the mat in the second minute, but once standing, Stewart landed a couple right hands that got Winn’s attention and got “The Dentist” back in the fight.

The third was close, with each fighter having his moments, but the two of the three judges thought more of those moments belonged to Stewart, who took the nod via scores of 29-28 twice and 28-29.

Social Post
Maycee Barber def Gillian Robertson by TKO at 3:04 of Round 1

In a clash of flyweight contenders, Maycee Barber remained unbeaten thanks to a first-round stoppage of Gillian Robertson.

Robertson started off well, but her striking was having no effect on Barber, who began to take the fight over when she was able to toss away her opponent’s takedown attempts. And once free from Robertson’s clutches, Barber stepped on the gas and began unleashing her strikes with bad intentions. Soon, Robertson was taking shot after shot, and referee Gary Forman had seen enough, stepping in to stop the fight at 3:04 of round one.

Social Post
Joe Lauzon def Jonathan Pearce by TKO at 1:33 of Round 1

Fighting at home in Boston for the first time since 2013, Joe Lauzon snapped a three-fight losing streak in emphatic style, stopping Octagon newcomer Jonathan Pearce in the first round of their lightweight bout.

Lauzon’s striking was on target from the start and after rocking Pearce twice, he took him to the mat. As they hit the deck, Lauzon locked up Pearce’s arm so he couldn’t defend himself, and after a series of on-target strikes, referee Herb Dean stopped the bout at 1:33 of the opening frame.

Social Post
Greg Hardy vs Ben Sosoli ruled no contest
Controversy reigned in the heavyweight bout between Greg Hardy and Ben Sosoli, as the unapproved use of an inhaler between rounds by Hardy turned a unanimous decision win into a no contest.
Before the post-fight ruling, Hardy went the distance for the first time as a pro, taking the decision over the UFC newcomer via three scores of 29-28.
Hardy fought patiently and effectively in the first round, using his height and reach advantages to control the action. Sosoli got some lunging shots in, but nothing that bothered the former NFL star.
The kicking game of Hardy was the main weapon early in round two, but Sosoli was willing to take a kick or two if it allowed him to get a looping punch off. Ultimately, though, the Aussie simply wasn’t busy enough to get Hardy’s attention, and the crowd was getting restless.
Approaching the third round for the first time of his career, Hardy used an inhaler between rounds, and while an inspector for the Massachusetts State Athletic Commission allowed its use, the commission later ruled against it, ultimately costing Hardy the win. At the time, the fight continued. And as it continued, it was with the same pattern of Hardy picking his shots from long range as Sosoli made sporadic rushes, but to no avail.
Hardy moves to 5-1 with 1 NC. Sosoli moves to 7-2 with 2 NC.
CO-MAIN EVENT
Yair Rodriguez def Jeremy Stephens by unanimous decision (29-28 x 3)

After a controversial no contest in September, Yair Rodriguez and Jeremy Stephens ran it back, and instead of 15 seconds, the two featherweight contenders went to war for 15 minutes, with Rodriguez taking a close, but unanimous, decision.

Rodriguez flew out of his corner with a kick and the fight was on. Both fighters were looking to end it early, but it was Rodriguez having greater success, mainly with his kicks. With two minutes left, Stephens got close and bulled Rodriguez into the fence, but only for a short spell. With under a minute left, Stephens got too aggressive going after an off-balance Rodriguez and got dropped briefly by a jab, capping off a solid round for “El Pantera.”

Rodriguez dropped Stephens with a body kick early in round two, and while Stephens appeared to be defending himself, Rodriguez emptied his tank in an attempt to finish. When it was clear that Stephens had cleared his head, Rodriguez slowed his attack on the ground, and after looking for a choke, Stephens was able to escape and get to his feet. Soon, it was Rodriguez on his back, and after he sought another submission, the two rose and Stephens surged just before the horn.

With the crowd roaring, Stephens marched forward in an attempt to land a haymaker while Rodriguez kept using his kicks from long range early in round three. As the round progressed, Stephens scored a pair of takedowns, and with the second one he kept Rodriguez grounded to the horn as he fired off strikes from the top position. When it was over, the two heated rivals shook hands and embraced, burying the hatchet after settling their score as sportsmen.

MAIN EVENT
Dominick Reyes def Chris Weidman by TKO at 1:43 of Round 1

In a spectacular main event performance at TD Garden in Boston, Dominick Reyes spoiled the light heavyweight debut of Chris Weidman and made his case for a shot at the 205-pound title by stopping the former middleweight champion in less than a round.

“I was out there having fun, feeling loose, he came in and I put him down,” said Reyes.

Reyes scored with a kick to start the bout, only to get grounded by Weidman. Reyes got up quickly, but the Long Islander stayed locked on his foe until the two broke with 90 seconds left. As they separated, Reyes clipped Weidman with a sharp left hand and dropped him. As Weidman tried to recover, Reyes took his time and picked his shots, and a series of hammerfists stunned the former champ once again, bringing in referee Herb Dean to halt the bout at 1:43 of round one.