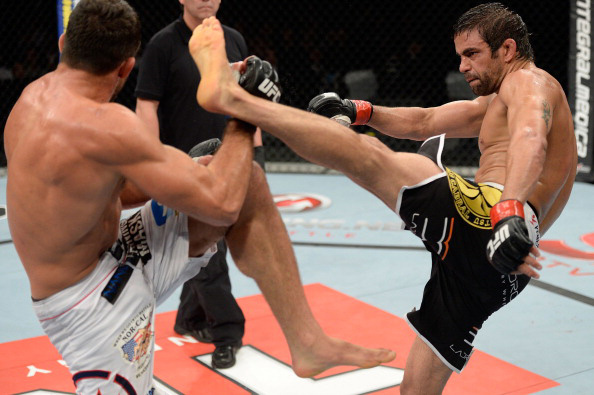 An early favorite to win The Ultimate Fighter Brazil 2 before being eliminated due to injury, Yan Cabral made his UFC debut a successful one Wednesday night at the Ginasio Jose Correa in Barueri, Sao Paulo, Brazil, as he went the distance for the first time as a pro in decisioning David Mitchell in UFC Fight Night prelim action.

The unanimous decision for Rio de Janeiro’s Cabral read 30-27 across the board.

Cabral got the fight to the mat early, moving quickly into the mount. Mitchell escaped the position and tried to lock up a leg, but Cabral pulled loose easily and took Mitchell’s back. The Santa Rosa, California product was able to escape, but Cabral continued to aggressively pursue better positions. With 1:45 left, the two rose but remained locked up against the fence for the majority of the rest of the round.

A big right hand by Cabral put Mitchell (12-4) in trouble as the second round opened, but the American was able to clear his head in seconds with the bout hitting the mat. Cabral kept working though, and even though Mitchell was fighting well, the Brazilian was unfazed by his submission attempts as he largely controlled the action.

There was more of the same in the final round from both fighters, with Cabral in charge of matters on the mat and Mitchell never giving in as he attempted to turn things around with his own submission attempts. In the end though, there was little doubt that Cabral, now 11-0, had earned the victory.

TUF 16 alumnus Igor Araujo made it 1-0 in the Octagon, scoring a three round unanimous decision win over Ildemar Alcantara in welterweight action.

The fans got restless early as the two grappled to a stalemate against the fence, but the boos stopped when Alcantara scored a takedown in the third minute. In a scramble back to the feet, Alcantara almost sunk in a choke, but Araujo got free and took the top position as the two tumbled to 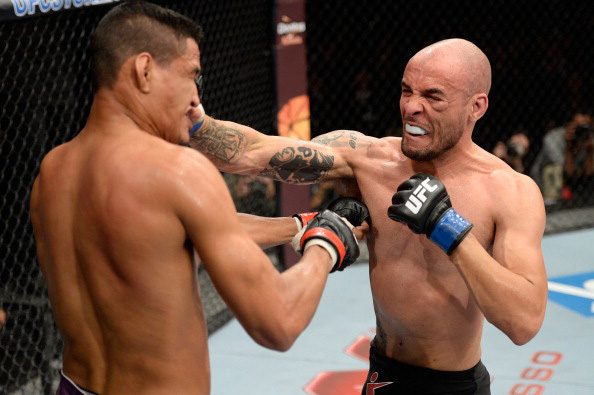 the canvas once again and stayed there until the round’s conclusion.

Araujo got off a nice right hand to kick off the second, but he was unable to follow-up, as Alcantara got the takedown moments later. Araujo adapted fast, trying to sink in a submission from his back, but Alcantara eluded further trouble and the fight soon went back to the feet. After trading right hands, the fight returned to the mat for the final two minutes, with Araujo staying busy and putting points up on the scoreboard.

Getting the takedown in the opening minute of the final round, Araujo had to defuse a kimura attempt from Alcantara before getting his offense into gear. Once he did, it wasn’t pretty, but he was busier than the fading Alcantara, securing his first Octagon victory.

Flyweight contender Chris Cariaso overcame a slow start to snap a two-fight losing skid and pick up his first finish as a UFC fighter, halting Iliarde Santos via strikes in the second round.

After biding his time in the face of a series of kicks from Cariaso, Santos got the takedown two minutes in and began working to get in a dominant position. He did, first the mount and then the 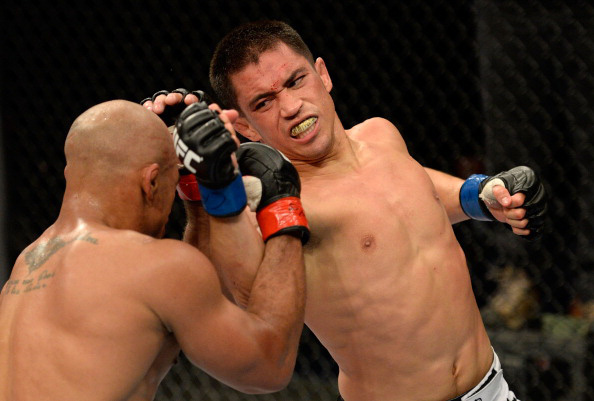 back, but Cariaso’s solid defense allowed him to escape and get back to his feet. This time, Santos held the edge standing, raising a mouse under his opponent’s left eye.  In the final 30 seconds, Santos got a second takedown, sealing the round in his favor.

Cariaso came out fast to start the second round, but Santos’ counters were evening things up, and he soon moved into the aggressor’s role. But Cariaso’s shots began to stun the Brazilian, and as the fight went to the mat, it looked like the American was about to pull away. Santos was able to hang on and get back to his feet, but with blood coming from his nose, the Belem veteran looked for the takedown again. Cariaso wasn’t having it, and his standup blows were punishing Santos as the round progressed, and after three big right hands, referee Keith Peterson stepped in to stop the bout. The time was 4:31.

In a battle of unbeaten lightweight debutants, Rio de Janeiro’s Alan Patrick was the one who left the Octagon with his “0” intact, as he stopped Garret Whiteley in the first round of the opening bout of the evening.

“I wanted to come in with a win and make my contract count, make sure the UFC knows I’m not joking around," said Patrick. "I’m ready for the next one, I’m hungry for fights. I think he didn’t know I had heavy hands; he must have seen videos of me with mostly submissions, but we train a lot of boxing and I hit hard.” 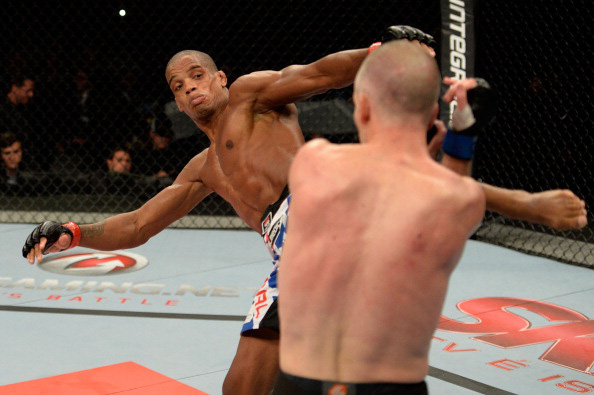 quickly, showing off a more refined striking attack than his wilder opponent, who ripped off several spinning attacks in order to close the distance and get another takedown. Whiteley was able to score with his uppercut in response, but when he went to the well once too often, Patrick tagged him with a left that sent the Indiana product to the canvas. Unable to recover, Whiteley was rescued by referee Marc Goddard after a series of unanswered blows at the 3:54 mark.

“I felt good during the fight until I got caught," said Whiteley. "It just happens. I thought he’d try to take me down more, but I guess I was defending well. He punches hard and I got caught, that’s it.”