Read on for a look back at last night's UFC Fight Night event... 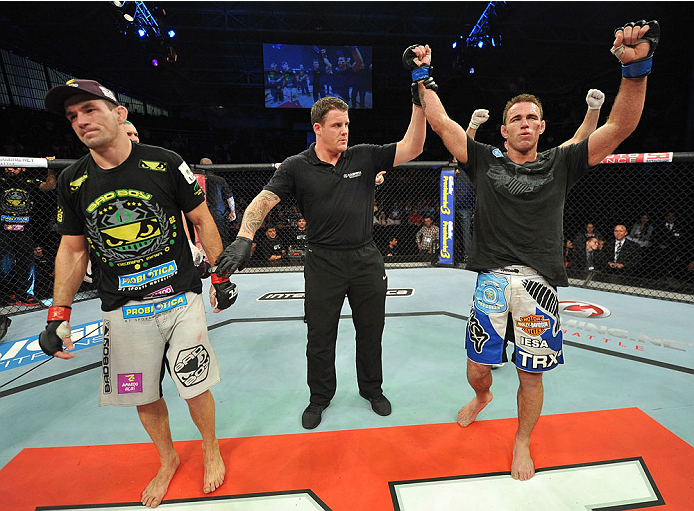 MAIA-SHIELDS
Wednesday’s main event between Jake Shields and Demian Maia didn’t turn into the fast-paced submission war diehard fans had hoped for, one similar to Maia’s 2008 clash with Jason MacDonald, but what it did prove is that when you get two elite groundfighters like this together, you shouldn’t be too surprised when a virtual stalemate results. Simply put, when you’re this good, you’re not accustomed to making mistakes or taking unnecessary risks. It’s the other guy’s job to make the mistake, and yours to capitalize. Unfortunately, Shields and Maia kept matters mistake-free for the most part, and a less than explosive five rounder resulted. That being said, there were several moments where you could appreciate the chess match being played out, and the win was a big one for Shields, who once again showed that he’s a gritty competitor not shy of going five rounds if necessary to get the victory.

STUN GUN
I’ve always come from the school of thought that if you don’t like the way your opponent fights, take him out of his game and beat him. Few have been able to do that to Dong Hyun Kim, but the South Korean still took his share of abuse from fans and his peers for his grind ‘em out style. That guy didn’t show up in Brazil last night though. Aggressive from the opening bell, Kim was on a mission to make something happen, and while he took some shots in the process, in the end he scored his first finish since his Octagon debut in 2008 and he looked damn good doing it. If this is the “Stun Gun” that continues to show up on fight night, you won’t hear any more complaints about his fighting style.

SILVA SURVIVES ANOTHER DAY
Following two no contests for failing post-fight drug tests, missing weight for his bout against Matt Hamill was probably the last thing Thiago Silva needed. Yet despite his checkered past in the Octagon, Silva was able to put together a win over Matt Hamill that kept his UFC career alive yet again. And that’s the sad part, because when he’s on, Silva is a dangerous and exciting light heavyweight, so he shouldn’t be continually putting himself in these situations. If he can consistently keep things together, there’s no reason why he can’t put together a nice win streak and battle his way into title contention. If he can’t, he may end up on the outside looking in as a cautionary title.

HAMILL’s FUTURE?
When Matt Hamill’s longtime trainer / manager Duff Holmes split with the former TUF 3 standout, it raised red flags throughout the MMA world, especially when you consider how close the two were and how much they had been through together over the years. Yet despite this, Hamill showed off some of the best standup we’ve seen out of him against Silva. The only major issues were his insistence on keeping the fight standing for much of the three rounder, and a lack of cardio that reared its head as early as the second round. With a full gas tank and – as commentator Kenny Florian pointed out – a mix of wrestling and striking, Hamill could have pulled off the upset. Instead, you have to wonder if he will choose to go to the well one more time and continue with his fighting career.

PALHARES
Today should have celebrated the emergence of Rousimar Palhares as a serious threat to the welterweight elite after his 31 second finish of Mike Pierce. Instead, the focus is on Palhares’ reasoning for holding on to his finisher after Pierce tapped and the referee called the fight. This isn’t the first time this has happened either, and it’s unfortunately garnered Palhares a reputation that no fighter wants to have next to his name. It has cost him his job as well, as UFC President Dana White announced Thursday that he was cutting the Brazilian from the roster for his actions.

ASSUNCAO-DILLASHAW
After a mixed bag of results when it came to the preliminary portion of Wednesday’s UFC Fight Night card, top ten bantamweights Raphael Assuncao and TJ Dillashaw kicked things into high gear in the first main card bout, with a Fight of the Night bonus check resulting for both men. On my scorecard, Assuncao eked out the win, but the fight was close enough that a nod for Dillashaw wouldn’t have raised an eyebrow. My solution? Let’s do it again, especially since the winner of the Urijah Faber-Michael McDonald bout in December will likely be the frontrunner for a shot at interim champ Renan Barao. And if champion Dominick Cruz returns in early 2014 to face Barao, that would tie up the title picture even longer, leaving an attractive Assuncao-Dillashaw rematch as a viable option to keep both fighters busy and raise their profiles for a possible shot at the belt even higher.

THIS AND THAT
Former TUF 16 competitor Igor Araujo showed potential in his decision win over Ildemar Alcantara, potential that should be better realized with an opponent that won’t be as stylistically nullifying as Alcantara…Yan Cabral’s bout with David Mitchell was probably a good representation of what should have happened with Shields and Maia, as the two traded submission attempts and transitions on the mat that kept the crowd captivated for all three rounds…It was good to see Chris Cariaso get back in the win column and also score the exciting stoppage of Iliarde Santos, just another example of the old adage that styles make fights…As for Santos, despite an 0-3 slate in the Octagon, he had a Fight of the Night with Ian McCall and gave a stellar and exciting effort against Cariaso. I wouldn’t mind seeing him back for one more opportunity to get in the UFC win column…Alan Patrick came into his battle of unbeatens with Garett Whiteley as the grappler, but he left it as the striker, with a definitive first round knockout the result. His wild striking may leave him susceptible to an accurate counterstriker, but until then, he should be fun to watch at the very least.