UFC returned to UFC APEX in Las Vegas with a striking fans’ dream fight, as No. 9 ranked featherweight contender Edson Barboza clashed with No. 10 Giga Chikadze. Also on the card, The Return of the Ultimate Fighter middleweight and bantamweight tournament winners were crowned.

Who Won Bonuses At UFC Vegas 35?

Giga Chikadze made a statement in his first UFC main event, as he extended his Octagon winning streak to seven with an impressive third-round TKO of fellow featherweight contender Edson Barboza.

Chikadze threw the first kick, quickly answered by Barboza, and the battle was on. Chikadze took an early lead, his speed and varied attack keeping his foe from getting into a rhythm, but Barboza kept marching forward. With a minute left, it looked like Chikadze hurt Barboza briefly, but the Brazilian recovered quickly until a late barrage had him on the defensive again.

The Georgia native continued to build his lead in the second, and he kept his strikes coming from different angles throughout. Barboza began to get closer to his foe, aided by a couple hard calf kicks, but he still had some work to do to slow his foe down.

30 seconds into round three, Chikadze stunned Barboza with a right hand, and sensing that the end was near, the Georgian went all-in for the finish. And while he briefly tried to end matters with a choke, he let the choke go and let Barboza up, only to send him back to the mat with his strikes, drawing a stoppage by Jason Herzog. The official time of the finish was 1:44.

The last pick of Team Volkanovski on TUF 29 is now the middleweight Ultimate Fighter, as Bryan Battle submitted Gilbert Urbina in the second round.

Urbina nailed Battle with some hard shots in the first minute of the fight, and he immediately followed up with a takedown and ground strikes. With 3:15 to go, Battle rose to his feet and began to implement his own offensive attack, scoring well until Urbina locked up with his foe and sought out a takedown. He didn’t get it, but the two continued to trade for the rest of the round.

Urbina landed several hard elbows early in round two, but moments later, it was the now bloodied Battle getting a takedown and then taking Urbina’s back. There, he sunk in a rear naked choke and forced the tap out at 2:15 of the second stanza.

North Carolina’s Battle moves to 7-1 with the win. Texas’ Urbina falls to 6-3.

In a fight reminiscent of the first Ultimate Fighter Finale bout between Forrest Griffin and Stephan Bonnar in terms of action and intensity, Ricky Turcios took the TUF 29 bantamweight crown with a three-round split decision over Brady Hiestand.

Hiestand put the fight on the mat in the opening minute, and though Turcios fought his way back to his feet, he was quickly floored again moments later. Turcios stayed busy from his back, giving him the opportunity to stand, and in a subsequent trip to the canvas, it was the Texan staying in control as he cut Hiestand. Once standing, the two traded, each fighter getting in some solid shots.

A takedown by Hiestand opened the second, but again, it was the busier Turcios doing the best work before the fight returned to the standing position. Two minutes in, Hiestand landed a flush left hand, and this time it was Turcios going for the takedown. Hiestand returned the favor with a slam, and the 135ers continued trading moments of control.

Turcios scored a pivotal knockdown with a pair of right hands early in round three, but Hiestand turned the misfortune into a takedown. As Turcios tried to get loose, he landed several close-range elbows, but Hiestand took them well and kept chasing another takedown. As the two battled it out against the fence, Turcios’ strikes were on target, but Hiestand didn’t back down, and he fired back, with the two slugging it out to the horn.

A fast-paced first round saw both fighters get in their shots on the feet, but it was on the ground that Lee surged ahead, as he delivered a takedown with two minutes left that kept Rodriguez grounded for the rest of the frame.

Lee got the takedown earlier this time, grounding his foe in the second minute, and while Lee took Rodriguez’ back, the Californian reversed position and the two soon returned to their feet. Rodriguez controlled the standup, staggering Lee late in the round and forcing a desperation takedown attempt that came up short.

Rodriguez kept landing in the third, cutting Lee in the process. A leg kick by Lee gave him the opportunity to move in for a takedown, and he got in the second minute, a pivotal moment for the Michigan native. Rodriguez got back to his feet quickly and was able to push Lee off him, and “D-Rod” resumed swinging at and landing on his opponent. Lee answered back, but his blows had little effect as the seconds ticked away.

In a meeting of Team Ortega middleweights from TUF 29, Andre Petroski stopped Micheal Gillmore in the third round.

Petroski landed the first big shot of the fight when he landed a right hand that led to a slam to the mat. Some punishing ground work followed, and though Gillmore made it upright with two minutes to go, another slam from the Philadelphian put the fight back on the mat, where it stayed until the horn.

There were some good standup exchanges in the second round, with Gillmore rapidly getting himself back in the fight as he kept Petroski from scoring a takedown. With a minute left, though, Petroski got the bout back to the mat and he kept it there for the rest of the round.

Petroski delivered another takedown to begin the final round, and this time, he closed the show, with a series of unanswered ground strikes prompting referee Jason Herzog to call an end to the bout at 3:12 of round three.

Muradov rocked Meerschaert twice in the opening minute, letting his foe up both times as he wisely preferred to keep the fight standing. Meerschaert looked to get the takedown, but Muradov wasn’t having it. An inadvertent low kick by the Wisconsin native slowed Muradov’s momentum, though, bringing a halt to the action. When the bout resumed, Meerschaert had his legs back under him and he landed some hard shots to keep Muradov at bay before scoring a takedown in the final minute.

The fast-paced action continued into round two, and when Meerschaert got the fight to the mat a second time, he locked in the rear naked choke that forced a tap at 1:49 of the second frame.

Ghana native Abdul Razak Alhassan wasted no time getting back in the win column, as he took just 17 seconds to defeat Alessio Di Chirico in 185-pound action.

A single right kick to the head landed flush, dropping Di Chirico to the canvas, with referee Herb Dean immediately stopping the fight. The victory was Alhassan’s first in the UFC as a middleweight and first overall since September 2018.

After a patient start to the bout, Turman surged late in the round, opening up a nasty cut under Alvey’s left eye with a spinning elbow before scoring two takedowns late. 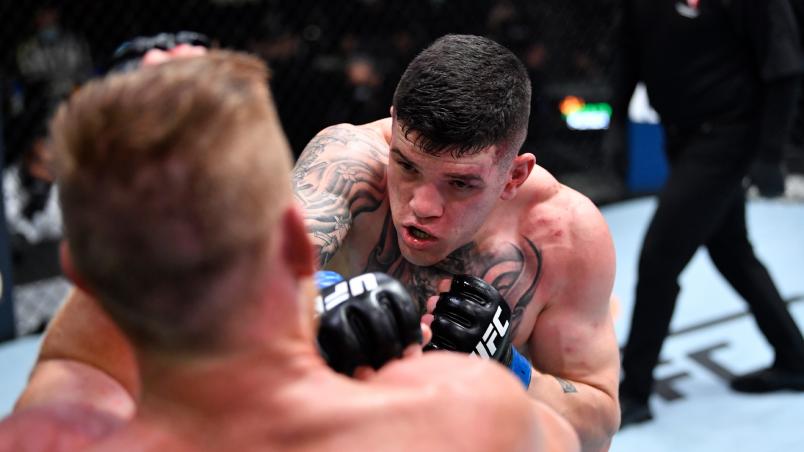 The second was closer, as Alvey scored well with single shots, a couple that jarred the Brazilian, but he wasn’t throwing with enough volume to keep Turman off him.

Alvey pushed the pace in the third, and his cause was aided when Turman lost a point from referee Chris Tognoni for repeated eye pokes. Moments later, another point was deducted from Turman for yet another eye poke, and when the action resumed, the two opened up, Turman holding the edge as he hurt the veteran down the stretch.

A head kick by Jacoby was met by a takedown attempt from Stewart in the early going, and while Jacoby rose to his feet, Stewart put him right back down before the first minute had elapsed. The two got upright and battled it out in the clinch before Jacoby broke free. “The Hanyak” worked well from distance, and after landing a hard right hand, he had Stewart in deep trouble. The Brit fired back when he could as he tried to turn things around, but after he ate a few more flush shots, referee Jason Herzog had seen enough, halting the fight at the 3:04 mark of round one.

Official result – Dustin Jacoby def. Darren Stewart via TKO (strikes) at 3:04 of round one | Official Scorecards

Flyweight standout JJ Aldrich was on target all night as she scored a shutout three-round unanimous decision over Octagon newcomer Vanessa Demopoulos.

Scores were 30-27 across the board for Aldrich, who moves to 10-5. Demopoulos, who replaced the injured Tracy Cortez, falls to 6-4.

Aldrich got the fight to the mat in the second minute, and after finding some daylight, she landed several hard ground strikes until the Coloradan let Demopoulos back to her feet.

Demopoulos, who normally fights at 115 pounds, was game throughout, but in the second, Aldrich kicked things up a notch with her striking attack, hurting the Arizonan with a liver kick late in the frame, and there was more of the same from Aldrich in the third as she sailed to a dominant decision victory.

Pat Sabatini looked to be in trouble early in his featherweight bout against Jamall Emmers, only to come back with a devastating first-round submission win.

Emmers stunned Sabatini with a pair of right hands, followed by a left, and as the fight went to the mat, he looked for the finish, but Sabatini recovered and the two traded leg lock attempts, with the Philadelphian winning that battle, as a heel hook forced Emmers to tap out at the 1:53 mark.

Battling on despite the recent passing of Saul Soliz, bantamweight prospect Mana Martinez did his coach proud by winning a hard-fought split decision over Guido Cannetti.

Cannetti’s kicks were flying in a fast and furious fashion throughout the first round, but his punches were on target too, as he marked up Martinez’ face. Martinez did land several hard blows during a heated exchange two minutes in, but a subsequent takedown attempt was reversed on the mat by the Argentina native.

The kicks kept coming from Cannetti in the second stanza, but Martinez closed the gap on the scorecards with a solid round that saw him have a lot of success whenever he was able to pin his foe to the fence. And in the third, he kept the heat on with his strikes before a late takedown with some ground-and-pound sealed the deal on the scorecards.

Martinez missed weight for the bout at 140 pounds.