Giga Chikadze (3-0 in the UFC) believes his UFC Fight Island 5 matchup with Omar Morales (10-0) is the perfect time to make a statement.
By Gavin Porter, On Twitter @PorterUFCNews • Oct. 7, 2020

On August 25, just four days before his scheduled bout with Alex Caceres on the UFC Vegas 8 card, Chikadze tested positive for COVID-19 and was forced to withdraw from the fight. It was a true disappointment for the featherweight prospect, as he had always wanted to test himself against “Bruce Leeroy”.

“I was super disappointed because I was preparing for this fight for like 10 years,” Chikadze told UFC.com. “I imagined it 10 years ago when I saw Alex Caceres in The Ultimate Fighter and I joked with my friends about fighting him because we have similar styles. I was really excited for such an entertaining fight and it’s a bummer it didn’t happen.”

Chikadze’s focus immediately switched to his health and following the correct protocols of quarantining. While at home, Chikadze trained in the backyard and spent time biking in the mountains and staying in shape. 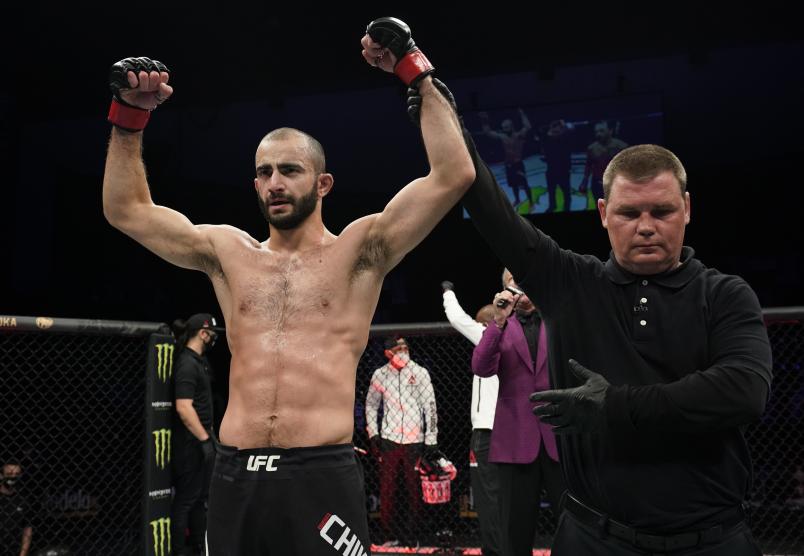 Giga Chikadze of Georgia celebrates after his victory over Irwin Rivera of Mexico in their featherweight fight during the UFC Fight Night event at VyStar Veterans Memorial Arena on May 16, 2020 in Jacksonville, Florida. (Photo by Cooper Neill/Zuffa LLC vi

The time away from his gym and teammates at Kings MMA allowed him to get the rest he needed and make the most out of a difficult situation. It was around the time that he was able to return to the mats at Kings that the Georgian secured a new fight against undefeated Omar Morales on UFC Fight Island 5 this Saturday.

It was a moment of excitement for Chikadze, who has gone 3-0 since joining the UFC just over a year ago. Not only is he healthy and scheduled to get back to fighting, but he will be doing it in Abu Dhabi on UFC Fight Island.

“I’m very excited for Fight Island. It feels like Mortal Kombat or like a Bruce Lee movie,” Chikadze said. “I wanted to be a part of the first Fight Island, and I feel like a real ninja is here on the island.”

Chikadze is confident that his ninja moves will be too much for Morales (10-0) to handle on Saturday, and he believes that people are overlooking him in their matchup.

And while Morales has been impressive in his first two UFC bouts, he enters new territory this weekend by dropping down a weight class to featherweight. Chikadze can’t wait to welcome Morales to the division and show doubters that he is the real prospect that they should have their eye on.

“It’s a fun fight for me because I’m an underdog and people think I’m going to lose this fight,” Chikadze said. “They think he is the stronger fighter and that motivates me. When I’m the underdog I fight my best. He’s a striker and I don’t see anyone in the UFC beating me when the fight stays standing.”

That underdog mentality has Chikadze fired up, and with the adversity he has already faced in the lead-up to this fight, he is ready to make a statement.

“I had COVID, I’m here on Fight Island, I’m in the best shape of my life, and I’m ready to prove who I am, and that I have the heart of the real champion,” Chikadze said. “I’m not in the top 15 right now but I know with this win people will see who I am and what I bring to the Octagon.

“It won’t be long before I will be there, and I can’t wait for that moment.”