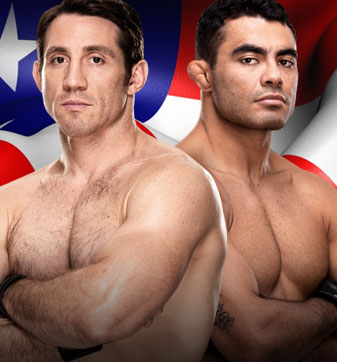 It's always a special moment when the UFC can travel to a military base and put on a fight card for the troops, and that's exactly what happens on Wednesday when the promotion lands at Fort Campbell in Kentucky for the third UFC Fight for the Troops show.

The card is decorated with military veterans, including both the main and co-main events, as Tim Kennedy takes on Rafael Natal while Liz Carmouche battles Alexis Davis in a pivotal matchup in the UFC women's bantamweight division.

While there are no titles on the line, bragging rights and contender spots are still up for grabs, while several young fighters will also battle for recognition.

In today's fantasy preview we will spotlight the main card, which features a total of five bouts with some very tight matchups leading the way.

Tim Kennedy has been preparing for his bout at UFC Fight for the Troops since the show was announced, and despite the fact that he had a change of opponents, this Army Ranger could not be more excited to perform for the military men and women who will be on base to witness the show.   There's always chatter about the pressure or the intensity of a hometown fight, and for Kennedy this is the equivalent of that.

When breaking down the statistics that Kennedy shares with his opponent Rafael Natal, they are eerily similar.  Almost exactly the same when it comes to significant strikes landed per minute, accuracy and striking defense.  The same can be said for grappling - similar takedown average, takedown accuracy, takedown defense and submissions.  So if these two fighters are so evenly matched, why are the odds so far apart with Kennedy coming out on top?

It's the intangibles that statistics can't cover. Kennedy has faced a murderer's row of middleweights during his time with Strikeforce and that's one area Natal just can't match him in. Despite the fact that Natal has far more UFC experience, he hasn't been in a main event or fought the same level of competition that Kennedy has in his career.  Kennedy is tenacious, his cardio is off the charts, and he's tough as nails.  Kennedy should be able to control the pace on Natal, wear him down over the course of five rounds, and by rounds four or five do enough damage to get the stoppage victory.  His will to win in front of the military should push Kennedy over the edge in the main event

Quite possibly the most intriguing fight on the entire card is a women's bantamweight matchup between Liz Carmouche and Alexis Davis.  Carmouche is coming off a dominant win over Jessica Andrade, while Davis squeaked by Rosi Sexton in her Octagon debut.  Carmouche is a powerhouse who is only getting better with each fight inside the cage, and that may be why she's such a sizable favorite going into the fight with Davis.

Carmouche is extremely well rounded, with solid wrestling and a developing submission game, not to mention serious punching power on the feet. She is also a finisher - she's put away seven of her eight wins inside the distance and she's only been to a decision one time in her career in a losing effort.  It could come back to bite her in this fight, however, because Davis is incredibly hard to put away and has a style that could give Carmouche trouble.

Davis is a wrestler and grappler by trade, and while she struggled to get Rosi Sexton to the ground in her debut fight, that doesn't mean she can't get the takedowns necessary to put Carmouche on the mat.  Davis is strong and her submission game is at the top of the division, which is one area where Carmouche has been finished before.  Davis is also unbelievably durable.  In her fight with Sarah Kaufman, despite being battered in the early part of the fight, Davis came back and nearly caught a late submission to steal the fight.  She's not out until the final horn sounds.  If Davis can push the pace on Carmouche and get the fight to the ground and into her world, she could pull off the upset win.

Another underdog to keep an eye on during the main card is Ronny Markes, who, despite veteran experience that far exceeds his opponent, is not favored by the sportsbooks to win this one.  That's a mistake.

Markes is a massive middleweight just like Romero, but experience plays a huge key in this fight.  Markes has faced three very solid fighters during his UFC career, including his last bout against Andrew Craig.  The Brazilian powerhouse is stifling on the ground, averaging just over three takedowns per 15 minutes, and here's the kicker as he faces a former Olympic wrestler in Romero: Markes has never been taken down in the UFC.  Romero is a solid prospect who looked blistering in his UFC debut, where he knocked out Clifford Starks in the first round, but this is a step up in competition and it may be a bit too soon.

Romero is very heavy handed, but Markes isn't likely to give him enough space to uncork a big shot.  Markes will get inside on Romero and grind him to a nub over the course of three rounds to come away victorious.

The upsets just keep on coming with this card because Rustam Khabilov may be a prospect to watch, but he's got no easy task in front of him facing Jorge Masvidal.  Throughout his career, Masvidal has been one of the most underrated fighters in the sport, and he just continues to surprise everybody that watches him.

Khabilov is potentially a beast, make no mistake about it, and as he showcased in his fight against Vinc Pichel in his debut, he's got some serious power with his throws and wrestling. That said, he's still pretty inexperienced by UFC standards, and while this is only Masvidal's second fight in the Octagon, he's faced a top list of opponents in his career.  He's gone to a decision with Gilbert Melendez and holds wins over fighters like Michael Chiesa and KJ Noons.  Masvidal is tough and isn't going to go away for 15 full minutes.  He will stand in the pocket until either he or his opponent go down.

The biggest factor in betting big on Khabilov right now is mostly his unknown factor.  He had a great debut and he started to show flashes of the same thing in his second fight, but his opponent suffered an injury and couldn't finish.  He trains under famed coach Greg Jackson and the marks are very high on this kid to go far.  That said, Masvidal is a hard matchup for anybody, much less a fighter essentially two bouts into the meaningful fights of his career.  If Masvidal can frustrate Khabilov's offense early, he could take over late and force his hand into an ugly decision to get the win.