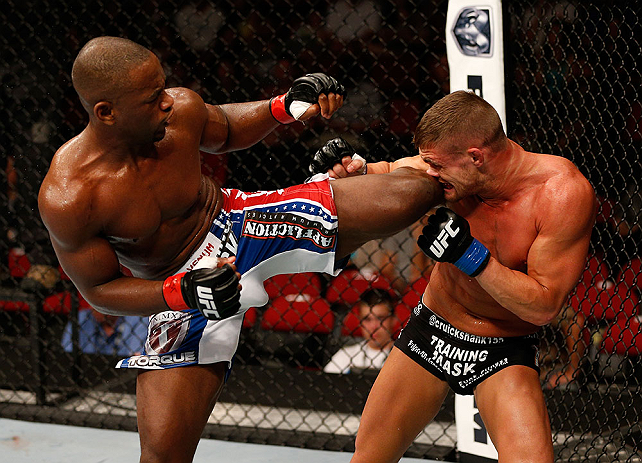 The upcoming UFC Fight for the Troops show isn't short on talent by any means, and that includes a huge list of veterans on the undercard airing on FOX Sports 1 and online.

Two UFC newcomers who made good in their first fight inside the Octagon look to do the same a second time when Bobby Green meets James Krause, while two of the top strikers in the women's division meet when Amanda Nunes takes on Germaine de Randamie.

There is definitely no shortage on tough fights to pick, but in today's fantasy preview we will give you a few of the key bouts on the undercard to keep an eye on for maximum scoring potential

One of the best fights on the UFC Fight for the Troops undercard is a lightweight battle with fireworks written all over it.  Bobby "King" Green made quite the impression in his first UFC fight when he dismantled Jacob Volkmann in the third round to win by submission and notch his fifth win in a row overall.  On the other side, James Krause debuted with a Fight of the Night performance and submission to best Sam Stout.

Where this fight splits apart just a bit and the edge goes to Green is in the striking department.  Green is a powerful puncher who lands at almost 58 percent accuracy on the feet while also showcasing great defense, where he blocks 72.12 percent of strikes thrown at him.  Those are the two areas where Krause comes up short, because not only does he land with less accuracy than Green (47.54 percent) but he also only holds 65.32 percent defense.  In other words, if Green is throwing his normal output of strikes, something should get through.

Green is also known as a late round finisher, so expect him to carry a lead into the third round and then try to close out Krause before the final bell, looking to take home another bonus just like he did in his debut with a Submission of the Night award in his name.

It's a striker's delight when George Roop battles Francisco Rivera on Wednesday night, and these two should put on quite a show for the troops.  Roop is fresh off a dominant win over former WEC champion Brian Bowles, where he finished the fight by TKO, and since returning to bantamweight earlier this year, he's 2-0 on the year.  Rivera has been out since February due to injury, but he'll return on a four-fight win streak and he's been on fire since returning to the UFC in 2012.

While Roop almost always enjoys a comfortable reach advantage while fighting at bantamweight due to his 6'1" height, he has to contend with a dangerous and scrappy opponent who can put his lights out in an instant.  Rivera has said he learned a valuable lesson from the two losses that got him bounced from the UFC, and since returning he's been a man on a mission.  He's looked crisp with his striking, but more than anything, when an opponent engages with him, Rivera makes them pay.

Knowing Roop's tendency to get into some striking battles that have cost him in the past, look for Rivera to come out swinging hard, heavy and fast and put this fight away inside the first two rounds.  If he lets Roop control the distance, however, Rivera could be in for a long night.

The women have been nothing short of fantastic since coming to the UFC earlier this year, and one sterling example of a fighter seizing her opportunity has been Brazilian Amanda Nunes.  Touted early in her career as the next great women's fighter, Nunes burst on the scene in Strikeforce, but it may have been a little too soon to heap praise on her head and she had some early struggles.  Still, the talent was there, and in her first UFC fight, Nunes put an absolute beating on Sheila Gaff.

Germaine de Randamie can relate to Nunes because she was also a top rated rookie when she came in to fight after an extensive history in Muay Thai bouts, but she also fell short of expectations. Lately, however, de Randamie has turned it around with wins over Hiroko Yamanaka and Julie Kedzie.  The problem that de Randamie has suffered lately has been an adjustment to her striking game to avoid takedowns, which has also affected her aggressiveness and ability to look for the knockout - something she's been known for since she started fighting.

This fight really comes down to who imposes their will first.  If de Randamie is passive and looking to avoid the takedown, as she has done a lot lately, it could cost her valuable rounds against a big, strong fighter like Nunes.  Nunes understands that she needs to get inside on de Randamie and avoid her razor-like knees and elbows.  She's smart enough to know that's where de Randamie is most effective, so Nunes should attack inside early and look for the takedown late to get the decision win.

The last time we saw Yancy Medeiros it was in his UFC debut, when he suffered a gruesome toe injury that forced a stoppage in his fight against Russian Rustam Khabilov.  It's now been six months since that moment and the young fighter isn't getting an easier test in his return when he faces 60-plus fight veteran Yves Edwards.

Edwards enters the fight in a tough position, losing his last two in a row and three out of the last four, but like any record, that can easily come with an asterisk next to it.  The three losses Edwards have suffered have all been extremely close bouts, two of them ending in split decisions.  Edwards knows how the mounting pressure can feel on a fighter desperate for a win, but he's the kind of fighter that just never looks rattled, no matter what's on the line.

Medeiros has a long list of knockouts and submissions on his record, but he's never faced a fighter with as much experience as Edwards, who also has a bag of tricks a mile wide.  If Medeiros hesitates in the least, giving Edwards an opening, he might wake up with the referee over him checking to make sure he's okay.  Edwards is a fast striker who only throws at 41.23 percent accuracy, but any one of those punches or kicks can easily be the knockout blow.  Edwards can also mix things up, and with his 50 percent takedown accuracy, don't be surprised if he looks to put Medeiros down on the ground to keep him guessing.

Edwards needs a win here and he should get it because there's just not enough to know about Medeiros just yet.  This could end up being his coming out party in the UFC, but the odds are on Edwards’ side to walk out the victor.