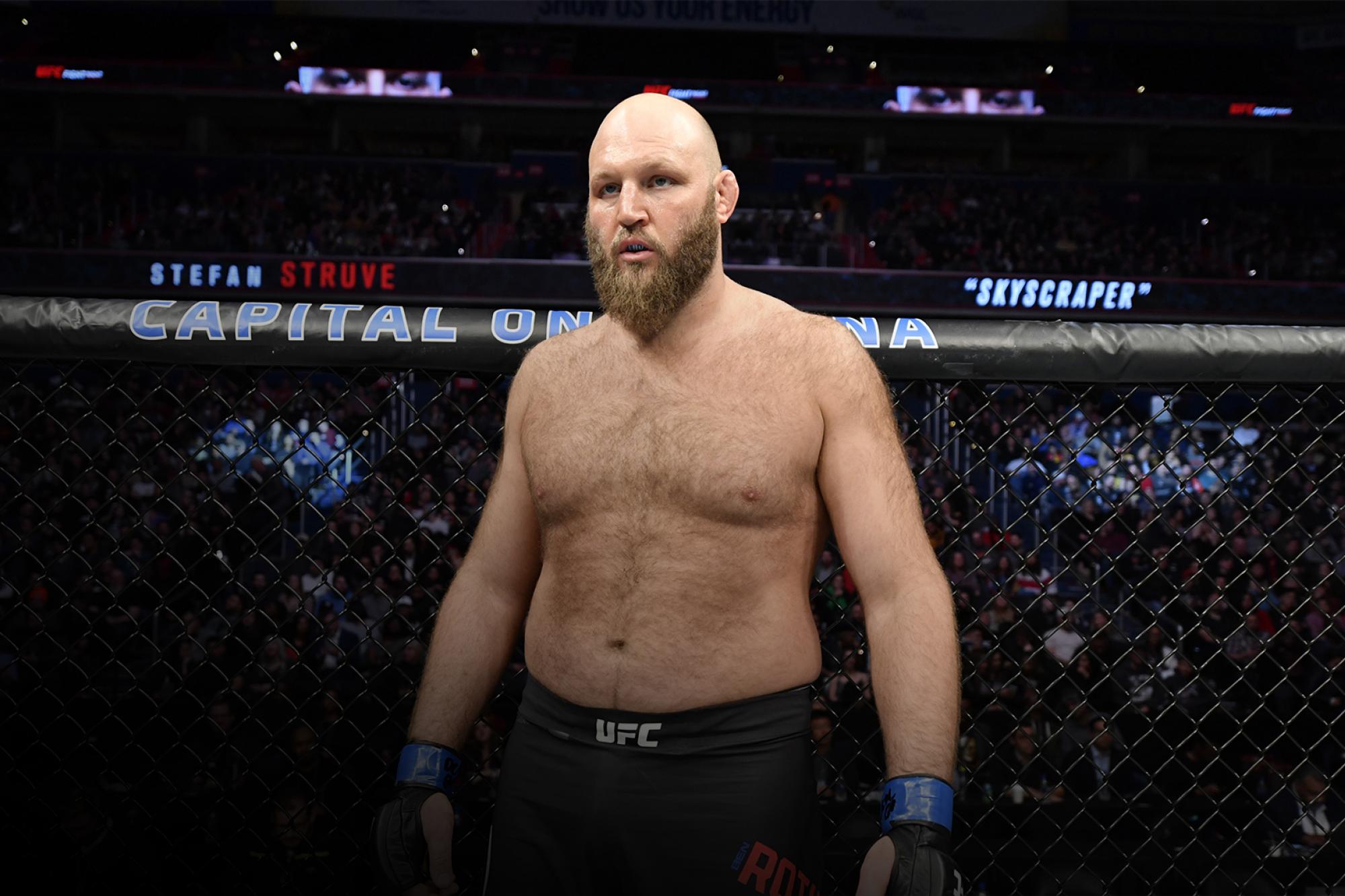 A fantasy-centric look at the main, co-main and featured bouts at UFC Jacksonville
By Zac Pacleb, on Twitter @ZacPacleb • May. 12, 2020

Coming off a successful return to action at UFC 249, the Octagon stays in place in Florida with another batch of bouts set for May 13. Headlined by a showdown between light heavyweight title challengers Anthony Smith and Glover Teixeira, UFC Jacksonville gives fight fans a midweek pick-me-up.

The rare weekday card is heavy on matchups that appear razor-close on paper, and where the athletes find their margins of victory likely translates to hotly contested, competitive scraps. With that in mind, let’s take a look at where those margins might live and how they might manifest on May 13.

What It Means: Since moving up to 205 pounds, a new Anthony Smith was unlocked inside the Octagon. Always one with great heart and the fight IQ that comes with high levels of experience, “Lionheart” is a skillful grinder who holds power and smart finishing instincts when a chance presents himself. Whether it seems like he’s out of a fight or pressing the action, Smith never fades from the opportunity should he get the shot to finish the fight. 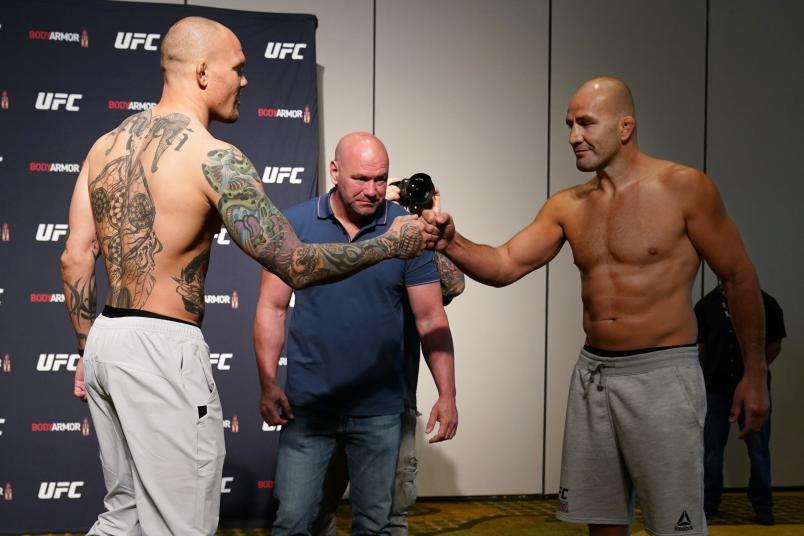 JACKSONVILLE, FLORIDA - MAY 12: (L-R) Opponents Anthony Smith and Glover Teixeira of Brazil face off during the official UFC Fight Night weigh-in on May 12, 2020 in Jacksonville, Florida. (Photo by Cooper Neill/Zuffa LLC via Getty Images)

What It Means: At 40 years old, Teixeira has a resume indicative of a long time spent on top of the division. As he aged into the second (or perhaps third) phase of his career, the knockout artist has shown he has a real and dangerous submission game with two of the victories in his current three-fight win streak coming by way of submission.

What to Look for in the Fight: These two are well-rounded, wily veterans of the fight game even though Teixeira is nine years Smith’s senior. They each have nearly 20 knockouts on their pro record, but the crux of it is that both men know how to grind out a win in whatever way necessary, so don’t be shocked if a rattling strike leads to an attempted submission.

What It Means: When he fought at light heavyweight, Ovince Saint Preux was a physically imposing presence who carried the power and tenacity to get frequent finishes. That said, he found an affinity for the “Von Flue” choke that led to several of his submission wins. Long and rangy, the fight goes to the ground if OSP wants it to, and if he’s on top, look for him to place his shoulder on his opponent’s neck and secure another Von Flue win. 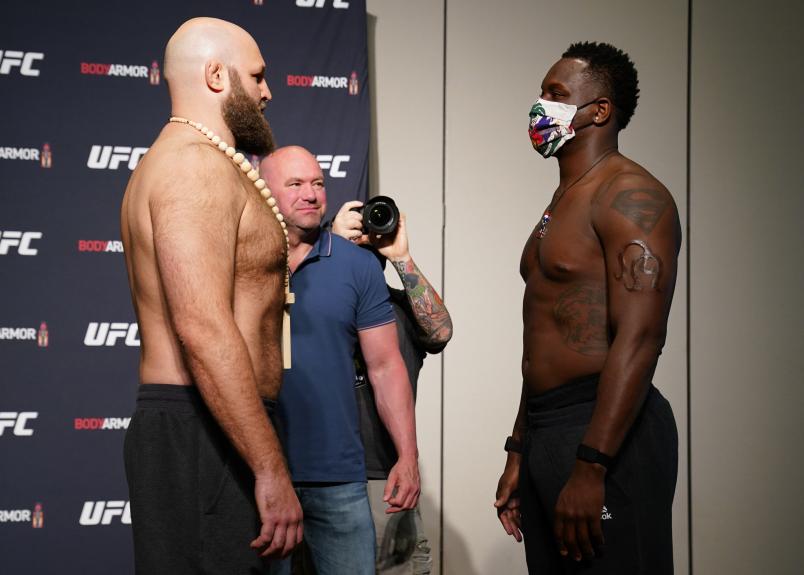 JACKSONVILLE, FLORIDA - MAY 12: (L-R) Opponents Ben Rothwell and Ovince Saint Preux face off during the official UFC Fight Night weigh-in on May 12, 2020 in Jacksonville, Florida. (Photo by Cooper Neill/Zuffa LLC via Getty Images)

What It Means: A roster mainstay since 2009, Ben Rothwell is the classic example of the heavyweight mantra: “It only takes one.” A true knockout artist with 28 to his name, Rothwell has found a way to impose his will and get fights to the ground or keep them on the feet when he wants it either way, and he carries his power deep into fights as well, as most of his knockouts in the Octagon have come past the first five minutes.

What to Look for in the Fight: Though both carry fight-ending power, Rothwell does enjoy going for a guillotine choke should the fight find him on his back. That said, that’ll play into Saint Preux’s hands as that leads to a Von Flue choke attempt. Rothwell, a heavyweight veteran, might be better served seeing if OSP brings his power up from light heavyweight, and if this fight lasts fewer than 15 minutes, nobody should be surprised.

Other Fights to Watch (Simon vs Borg, Vettori vs Roberson)

What It Means: Ricky Simon is a spry up-and-coming bantamweight who leans heavily on his wrestling to impose his will. With a high work rate, his opponents often have to spend most of their energy fending off his takedowns, and when you throw as many out there as Simon, you become more adept at landing them.

What It Means: Ray Borg’s grappling-heavy approach keeps him from absorbing shots, and when he does throw his strikes, they often land. But much like many athletes who enjoy taking fights to the ground, his striking is a means to a takedown, and in another fight up from his usual flyweight home, Borg might carry the speed advantage as well.

What to Look for in the Fight: This could develop into a fun, scrambling bout between two guys who like to mix it up on the mat. Neither is accustomed to spending much time on the bottom, which could beg questions of both their get-up ability and how well they work off their back. 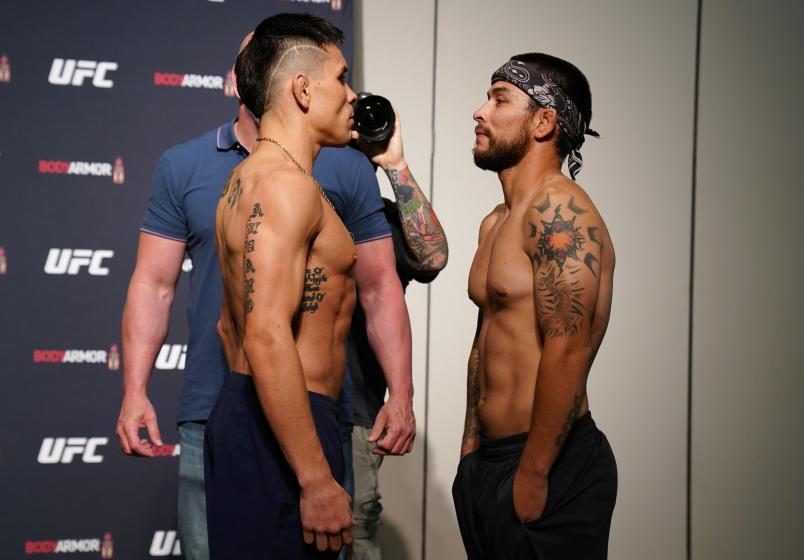 JACKSONVILLE, FLORIDA - MAY 12: (L-R) Opponents Ricky Simon and Ray Borg face off during the official UFC Fight Night weigh-in on May 12, 2020 in Jacksonville, Florida. (Photo by Cooper Neill/Zuffa LLC via Getty Images)

What It Means: Marvin Vettori has the kind of engine that wears on his opponent. He’s going forward almost always, and if he’s not throwing strikes, he’s using his 6-foot frame to press against the cage and get his opponent to the ground. This activity often swarms his opponent and makes it hard for them to get their offense going.

What It Means: The middleweight prospect has shown greater comfort when dictating the action, making it hard for his opponents to hit him while using a diverse array of attacks to press his advantage. With good size for the division, as well, Roberson has competed well with several veterans and has only lost once at 185 pounds.

What to Look For in the Fight: This could prove to be a stalemate of styles in the sense that it could be a solid proving ground for a pair of middleweight prospects who haven’t obtained that definitive win on their record. With strong, well-rounded skill sets on both sides, this matchup could allow for either athlete to really show what exactly their strengths are and how that can get them higher up the ladder in the division. 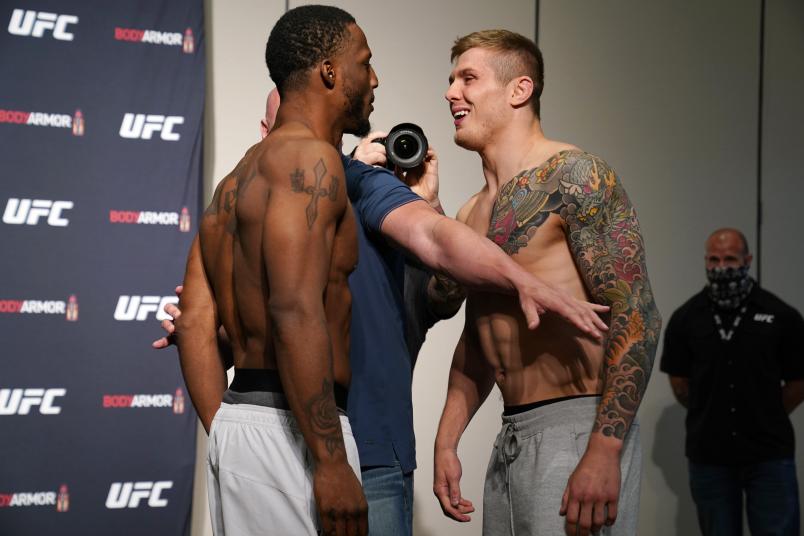 JACKSONVILLE, FLORIDA - MAY 12: (L-R) Opponents Karl Roberson and Marvin Vettori of Italy face off during the official UFC Fight Night weigh-in on May 12, 2020 in Jacksonville, Florida. (Photo by Cooper Neill/Zuffa LLC via Getty Images)