Take a deep dive into the key stats of some of the UFC Fight Night: Hermansson vs Vettori's biggest match-ups.
By Zac Pacleb, on Twitter @ZacPacleb • Nov. 18, 2020

(All stats according to UFC’s Record Book and Fight Metric as of November 18, 2020, and only include active athletes in their respective division unless noted otherwise)

What It Means: Jack Hermansson often comes out in two modes: ultra-aggressive and looking to finish the fight quickly, or patient and tactical (but also looking to snatch a quick finish). He has a high motor and a diverse grappling game that sometimes catches people off guard due to how fast he finds a window for a submission. His jiu-jitsu is slick, but there’s something a little different in how he finds his opportunities. On the feet, he is adept at using his long legs for teep kicks and he strings together combinations well, relying on volume more so than power.

What It Means: “The Italian Dream” is a durable, aggressive fighter who has shown a well-rounded skill set thus far in the UFC. He is particularly strong at close range, muscling his opponent along the fence and routinely scoring takedowns. Vettori is particularly adept at shutting down his opponent’s game plan, either swarming with pressure or grinding the fight out in the clinch and pushing the fight wherever the opponent is least comfortable and least dangerous.

What to Look For in the Fight: Hermansson and Vettori are two of the more aggressive human beings on the roster, especially the Italy native, but they channel it in a focused way when it comes to mixed martial arts. Both are well-rounded fighters, but Hermansson has the better finishing record. He has a sneaky ability to corner his opponent and snatches a limb or a neck with real quickness. On the other hand, Vettori has shown keen awareness to his opponent’s plans and is strong defensively, often creating a frustrating time for his opponent.

What It Means: “OSP” is a quirky finisher, as evidenced by his ability to lock up so many Von Flue chokes on unsuspecting opponents. He is a methodical fighter when it comes to striking, opting to wait patiently to land the home run punch or devastating kick, but he isn’t stationary. He’ll set things up over time, and he is an imposing physical presence at 6-foot-3 with an 80-inch reach. His left head kick is a particularly powerful weapon.

What It Means: Jamahal Hill moves and fights with that confidence unique to undefeated fighters and, so far, he’s shown he has the potential to make waves at light heavyweight. He moves smoothly around the Octagon, and when throwing combinations he keeps his straight punches long and rangy. Hill has a pretty good idea of how to manage distance, and he is particularly adept at landing his left knee to his opponent’s body either upon their entry or in the clinch. He keeps a high work rate and continues to improve in the grappling area.

What to Look For in the Fight: This is the biggest step up in competition for Hill in terms of danger and also experience. Few fighters in the division have spent more time in the Octagon than Saint Preux, who is coming off a definitive knockout win over another young prospect in Alonzo Menifield. Hill will have to negotiate getting into range with a bigger foe, but he does hold the speed advantage. It’ll be interesting to see if Saint Preux tries to mix things up and go to the ground, where he definitely the more seasoned fighter. 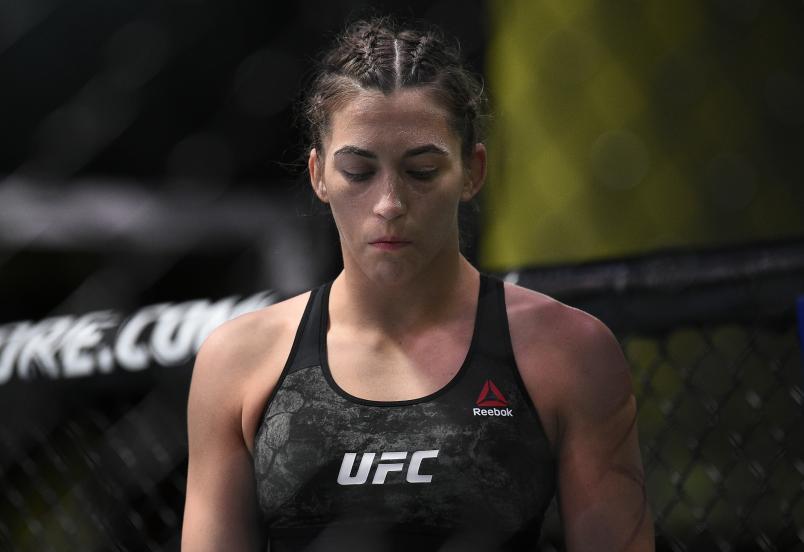 What It Means: Although her skill set has matured throughout her time in the UFC, De La Rosa’s strength is in her grappling. A former high school wrestler, De La Rosa is skilled in transitioning into threatening positions deliberately before sinking in a choke or another submission. On the feet, she has made great gains, and mixes in her punches and kicks well. The better her rhythm gets on the feet, the more she works off heavy shots while transitioning into a takedown and forcing a scramble. 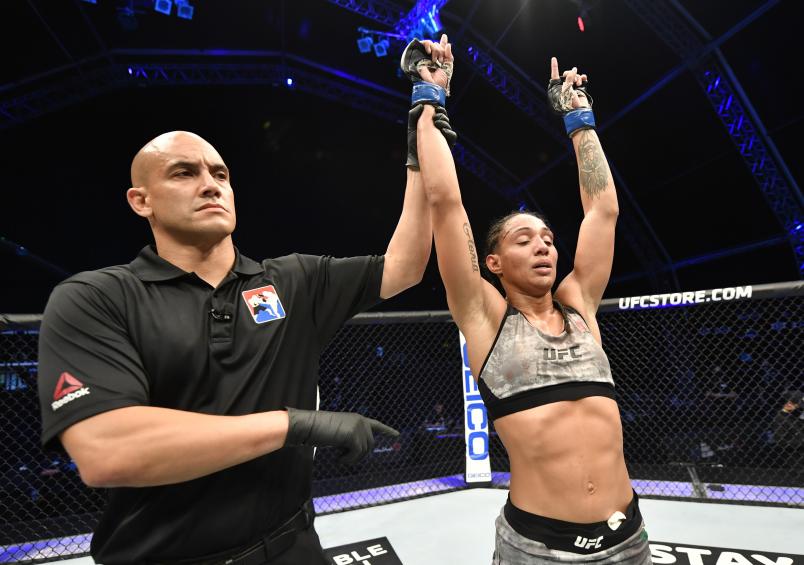 Taila Santos of Brazil celebrates after her decision victory over Molly McCann in their flyweight fight during the UFC Fight Night event inside Flash Forum on UFC Fight Island on July 16, 2020 in Yas Island, Abu Dhabi, United Arab Emirates. (Photo by Jef

What It Means: Santos is a talented entry in the flyweight division, and her striking is measured but vicious. Once she makes her reads, she is strong at either disrupting her opponent’s rhythm with a long jab or front kick to the body, and she is quick in entering and exiting range. When her opponent goes for a takedown, she has pretty good timing, either hitting them with a knee up the middle or in stuffing the shot, and in the clinch, she is strong and works well once she gets the Muay Thai clinch.

What to Look For in the Fight: Essentially a striker-vs-grappler matchup, it will be interesting to see who wins in the transitional portions of the fight – after takedowns are attempted or while fighting for control along the fence. De La Rosa is probably the strongest grappler Santos has faced in the UFC, but De La Rosa has at times struggled against a standup fighter who can stuff takedowns and keep things at range.