Take a deep dive into the key stats of some of the UFC Fight Night: Chiesa vs Magny's biggest match-ups.
By Zac Pacleb, on Twitter @ZacPacleb • Jan. 17, 2021

Take a deep dive into the key stats of some of the UFC Fight Night: Chiesa vs Magny's biggest match-ups.

What It Means: As soon as Chiesa made his move up to welterweight, it was a wonder how the Washington-based fighter ever made the lightweight limit. His grappling-heavy style matched in par with the extra 15 pounds at 170, and he’s been able to implement a strong pace in fights. Chiesa has improved his striking and mixes that into takedowns along the fence rather seamlessly. He grinds his opponents against the fence, switching between takedowns and dealing some damage, and if his opponent starts to fade, he is adept at seeking out an opportunity for submissions, particularly rear naked chokes.

What It Means: Neil Magny has long been one of the most well-rounded fighters in the division, and his recent trio of wins over Li jingliang, Anthony Rocco Martin and Robbie Lawler have given a sense that Magny is set to move to the next level of competition. Magny is strong at keeping a good distance in striking, but in close quarters, he has good strength and control that negate his opponent’s goals.

What to Look For in the Fight: In a battle of welterweights looking to make the leap into the upper-echelon of the welterweight division. Both are pretty well-rounded with favorable ways they want the fight to go. Chiesa strikes to initiate grappling exchanges, and Magny is solid enough in those moments to get back to the feet. How Magny uses his range to stave off Chiesa’s forward pressure will be interesting, and who dictates that pace as the fight moves into the later rounds could prove pivotal in whose cardio holds up better.

How To Watch UFC 257: Dustin Poirier vs Conor McGregor 2 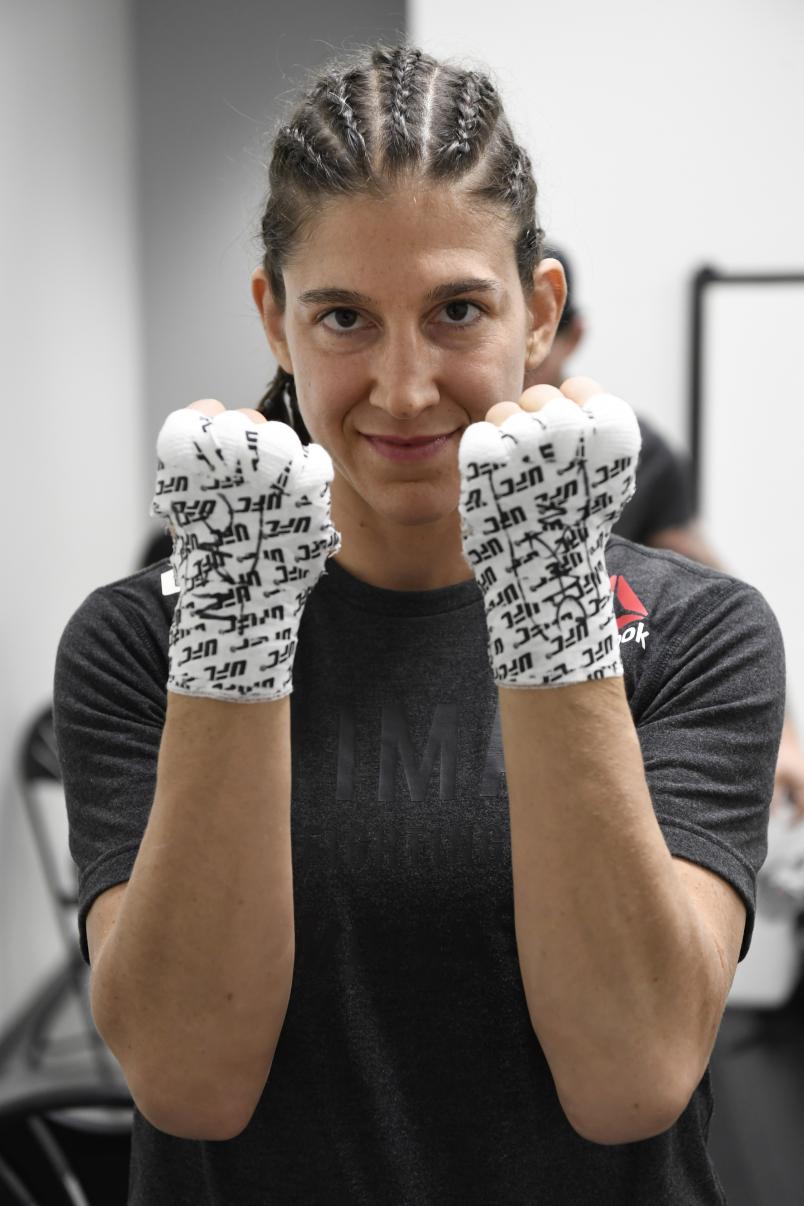 Roxanne Modafferi has her hands wrapped prior to her fight during the UFC Fight Night event at UFC APEX on September 12, 2020 in Las Vegas, Nevada. (Photo by Mike Roach/Zuffa LLC)

What It Means: While Modafferi has made major improvements in her standup game, her bread-and-butter will always be her grappling. She is patient yet tricky, and her vast experience shines in moments where her opponent might think there’s an escape route available. Modafferi, when on her game, can snuff those things out and make life rather miserable for her opponents. She’s particularly strong in the clinch and uses a variety of trips, throws and other techniques to get the fight to the ground. 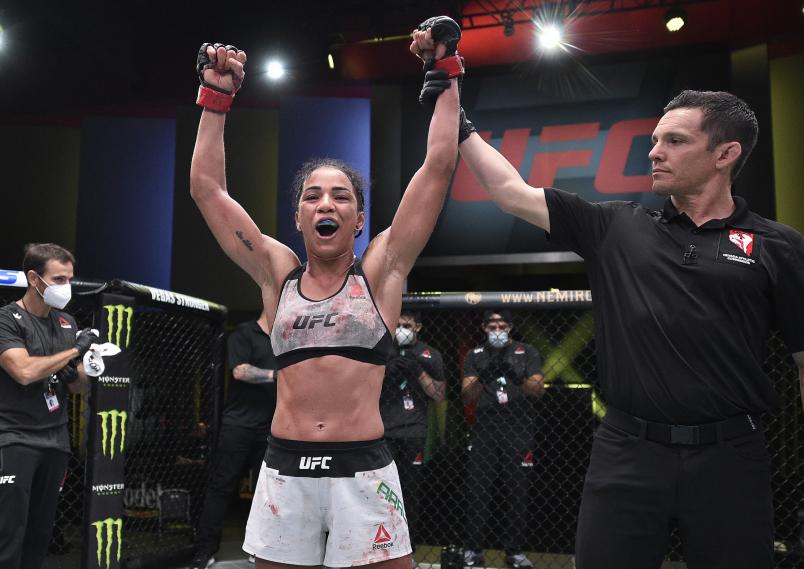 Viviane Araujo of Brazil reacts after her victory over Montana De La Rosa in a flyweight fight during the UFC Fight Night event at UFC APEX on September 05, 2020 in Las Vegas, Nevada. (Photo by Chris Unger/Zuffa LLC)

What It Means: Araujo is a dynamic, athletic fighter who implements a high-octane style of striking. She is constantly bouncing in and out of range, exploding into range with flurries and diverse strikes, but in close quarters, she is strong and stuffs takedowns pretty well. Because of her style, she is at risk of fading a little bit as the fight goes on, but her power and speed are such that she can reserve energy for explosions when the moment is needed.

What to Look For in the Fight: Look for Araujo to put Modafferi on the back foot early with her in-and-out style, but Modafferi’s experience and ability to use her opponent’s leverage against them is something to watch for as well. Early, Araujo’s athleticism will probably make her the more dynamic fighter, and Modafferi’s ability to handle that speed is key. Modaferri is the fighter more comfortable at a grinding pace, and if a lot of this fight takes place against the fence and in close quarters, she’s likely dictating the bout. 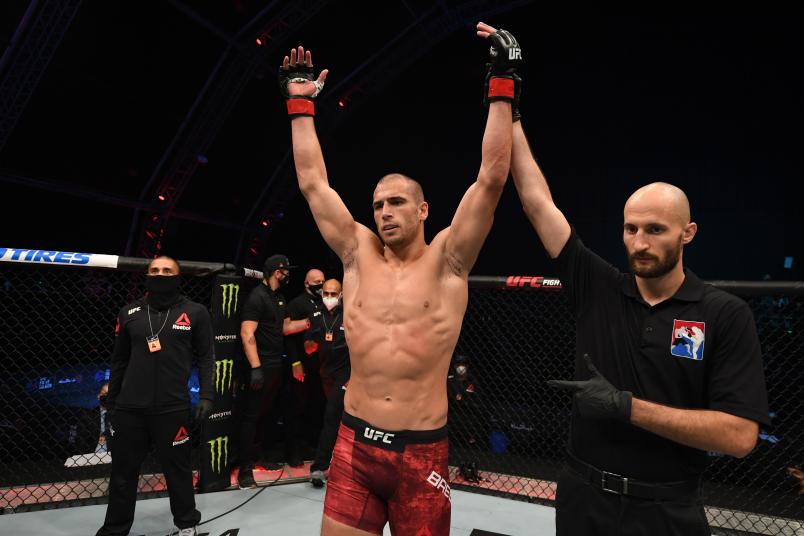 What It Means: Breese is a cerebral, well-rounded fighter who has all the tools to be a highly-rated fighter. When he is locked in, there are few weaknesses in his game. He has some pretty slick, dangerous grappling and loves to look for a rear naked choke, but in his UFC run, his best success has come on the feet. He is a tight and technical striker who likes to pick his spots and sit down on punches when the window presents itself.

Related: Tom Breese Eyes A Run To The Top 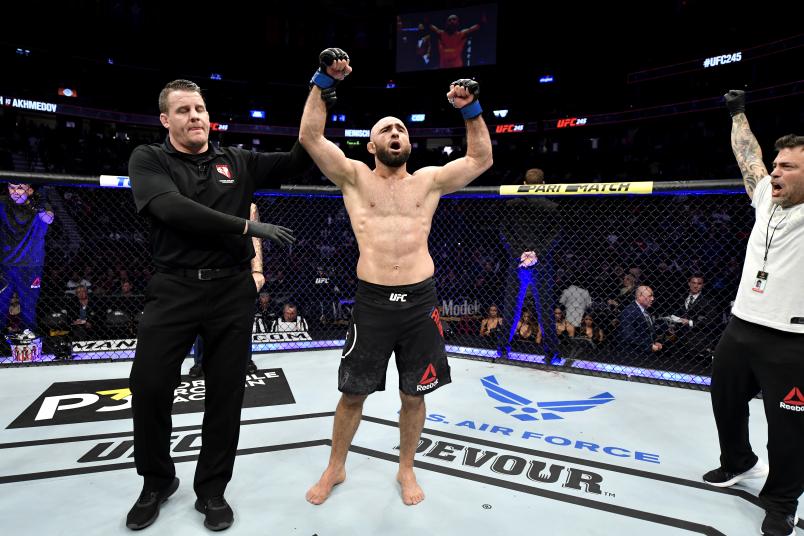 Omari Akhmedov of Russia raises his hands in victory over Ian Heinisch in their middleweight bout during the UFC 245 event at T-Mobile Arena on December 14, 2019 in Las Vegas, Nevada. (Photo by Jeff Bottari/Zuffa LLC)

What It Means: Akhmedov is a bulldog of a fighter that can wither an opponent down with his physicality, particularly in grappling exchanges, and work against the fence. He is a durable fighter with a wrestling-based attack, and while he can land heavy shots to end a fight, his goals usually circumvent controlling his opponents first before unleashing punishment.

What to Look For in the Fight: Akhmedov is likely going to try to negate Breese’s striking by pressing forward against the fence and tiring him there, so how Breese reacts to those exchanges is key. Whether it’s through his jiu-jitsu or in successfully staving off takedown attempts and picking his strikes, Breese has perhaps more tools technically, but Akhmedov does have the kind of style that can suck the life out of a fighter.