(All stats according to UFC’s Record Book and Fight Metric as of November 18, 2020, and only include active athletes in their respective division unless noted otherwise)

What It Means: While the flyweight champion is a pressure-forward fighter, he doesn’t implement his brand of pressure through a bevy of strikes but rather a stalking, imposing presence in the Octagon. He picks his shots patiently, utilizing his footwork and understanding of distance to set up those crunching strikes. His power looks incredibly natural, never requiring the Brazilian to wing strikes wildly at his foe, and he is equally effective moving forward and backward countering. Grappling-wise, he is strong, despite what his wiry frame would indicate, and has a slick submission game.

What It Means: Although Perez has a strong, credentialed wrestling base, his striking is fundamentally sound and powerful. He keeps a tight, high guard and displays solid footwork when entering and exiting the pocket. His attack is varied, and he has shown a nice mixture of leg kicks to set up punching combos as well as utilization of his hands to set up low calf kicks that have won him fights in the past. He is constantly peppering his opponent with shots and does well to string together multiple strikes, rarely just throwing one at a time.

What to Look For in the Fight: Perez is definitely the more active of the two on the feet, and it wouldn’t be surprising to see him open up on Figueiredo’s legs early. That said, the champion is adept at working off the back foot and waiting for his chance to counter, so Perez will need to focus on getting out of the way of any incoming fire when he throws those meaningful leg kicks. If Figueiredo finds his timing and distance, he is as good as any at stalking his opponent to the fence and unleashing strikes that either lead to an immediate finish or a grappling sequence. If the latter happens, Perez does have tricky submissions himself, as well as that wrestling acumen, so he should provide resistance either way.

What It Means: Shevchenko might very well be the highest level, most well-rounded mixed martial artist in the sport. A technically-sound, lightning fast striker, Shevchenko is twitchy when countering either with punches or shockingly quick spinning kicks when opponents step just into range. She shows no real holes in her game, even when the fight goes to the mat. She is strong in close quarters, whether clinched up against the fence or hip tossing her foe to the canvas. She has the ability to completely neutralize her opponent before going for the finish, often making it look easy.

What It Means: Maia is a strong, sturdy fighter who has a powerful striking style that is set up well with her footwork and head movement. Once she finds a rhythm with her hands, Maia has shown a good ability to flow and mix in kicks, boxing combinations and clinch strikes when she gets in close. She has a good grappling base and a tricky guard that can catch people out of position as she did against Joanne Calderwood.

What to Look For in the Fight: Shevchenko has shown during her flawless flyweight run the ability to fight on the front and back foot with as much ease and control as any champion in recent memory, so where she decides to take the fight remains to be seen. One could assume she would rely on her striking game, where she can catch Maia if the Brazilian gets overly aggressive. That said, Maia does hold some good power in her strikes and is plenty strong in close, so that could force some clinch situations along the fence, and on the mat, she can also throw up different submissions. 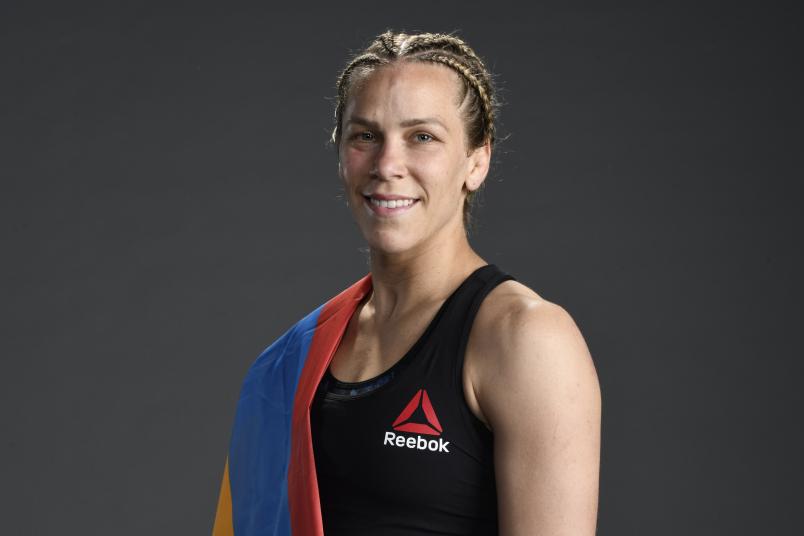 Katlyn Chookagian poses for a portrait backstage during the UFC Fight Night event at UFC APEX on May 30, 2020 in Las Vegas, Nevada. (Photo by Mike Roach/Zuffa LLC via Getty Images)

What It Means: Chookagian is one of the better, more fundamentally well-rounded fighters in the flyweight division and utilizes her long frame to her advantage. Her footwork and distance management often makes it difficult for opponents to get into their range, and she is quick with her entrances and exits out of the pocket after throwing a combination. Chookagian also keeps a steady work rate, never getting out of control but also keeping the pressure on her opponent. She is also sound in the grappling department, displaying good top control as well as defensive grappling. 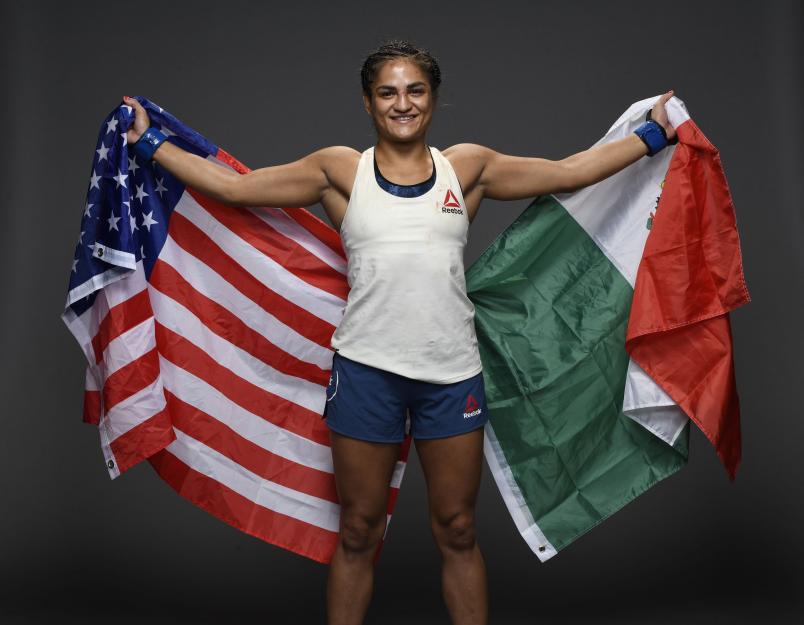 What It Means: Calvillo is a grappling-based fighter whose striking continues to improve in the UFC, but as much as her abilities become more well-rounded, she stays true to her elite skillset on the mat. In her first flyweight bout against Jessica Eye, Calvillo showed she has the strength and size for the division to go along with her skillset. In close quarters, Calvillo uses her leverage effectively and shines when getting the fight to the ground.

What to Look For in the Fight: This fight is your basic striker-vs-grappler bout, but high-level versions of that clash can also shine a light on each fighter’s perceived weaker areas. Calvillo stood strong and won most of the striking exchanges against Eye, and Chookagian has shown the ability to out-grapple lesser experienced opponents, so neither fighter is out of their depth if the fight stays in another’s advantage. How Calvillo can close the distance is a point to watch, as Chookagian’s footwork and distance management are among her best assets, and Chookagian’s defensive grappling will be called upon if and when Calvillo can bring the fight into her world. 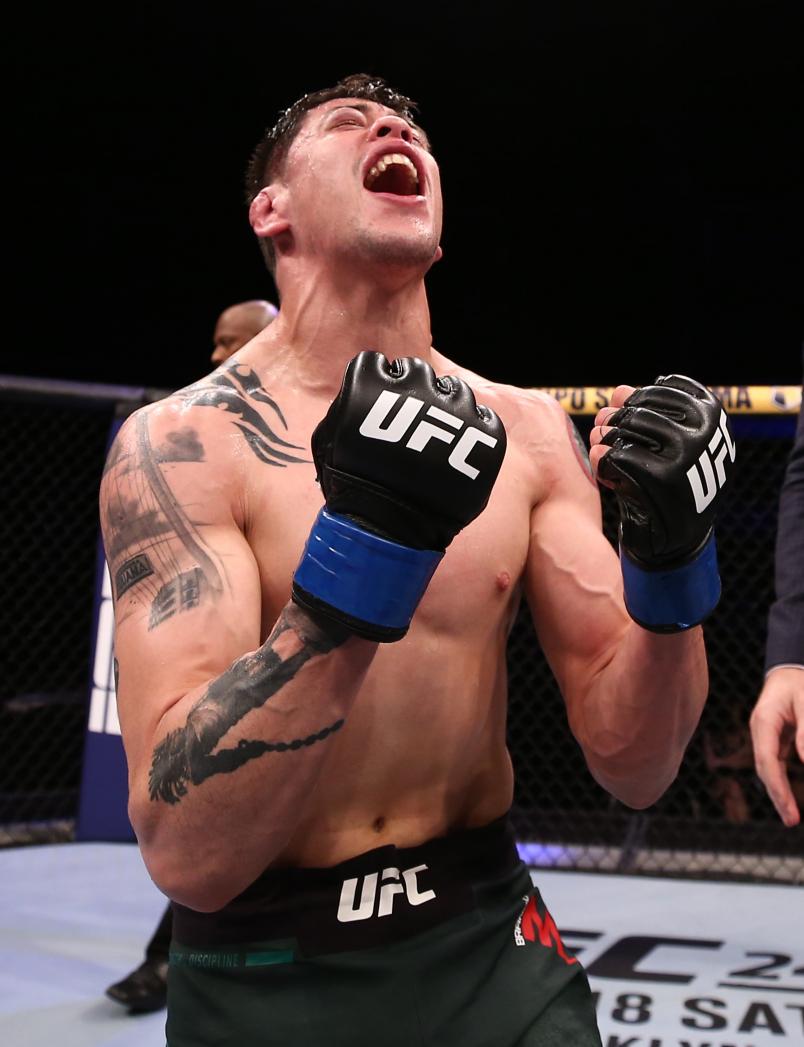 Brandon Moreno of Mexico celebrates after his victory over Jussier Formiga of Brazil in their flyweight fight during the UFC Fight Night event on March 14, 2020 in Brasilia, Brazil. (Photo by Buda Mendes/Zuffa LLC)

What It Means: Although Moreno’s record of finishes shows mostly submissions, the Mexican has shown incredibly improved striking in his return to the UFC. Particularly, his boxing is smooth with long punches and elusive head movement. The confidence in this department has oozed out of him in his last few fights, and he now strikes with the abandon that requires high-level grappling ability to problem solve if that striking goes south. He is long-limbed and has improved in utilizing that frame to his advantage in the flyweight division.

What It Means: Royval has quickly established a reputation of being a somewhat wild, always dangerous fighter, whether he is grappling and looking for submissions or throwing an unpredictable strike. He showed against Kai Kara-France he can recover quickly and turn the tide in a blink, biting down on his mouthpiece to find the finishing shots against the New Zealander. He is ultra-fast and unafraid of eating a shot in order to give a finishing blow, and he is scrambly in grappling exchanges, making his opponent work hard to keep him on the mat while threatening submissions if they make a mistake.

What to Look For in the Fight: This should be a fun, entertaining fight between two balanced and finish-minded flyweights. Moreno is the more patient of the two, and both fighters have shown great ability to bounce back after getting rocked and then turn the fight around. Neither fighter is an easy out, and they both keep a high work rate in both striking and grappling. Moreno is the more experienced of the two in the Octagon and fights as such, but Royval has shown that he can be a bit of a chaos agent, so how Moreno can respond to that kind of energy might be predictive of how the fight plays out.