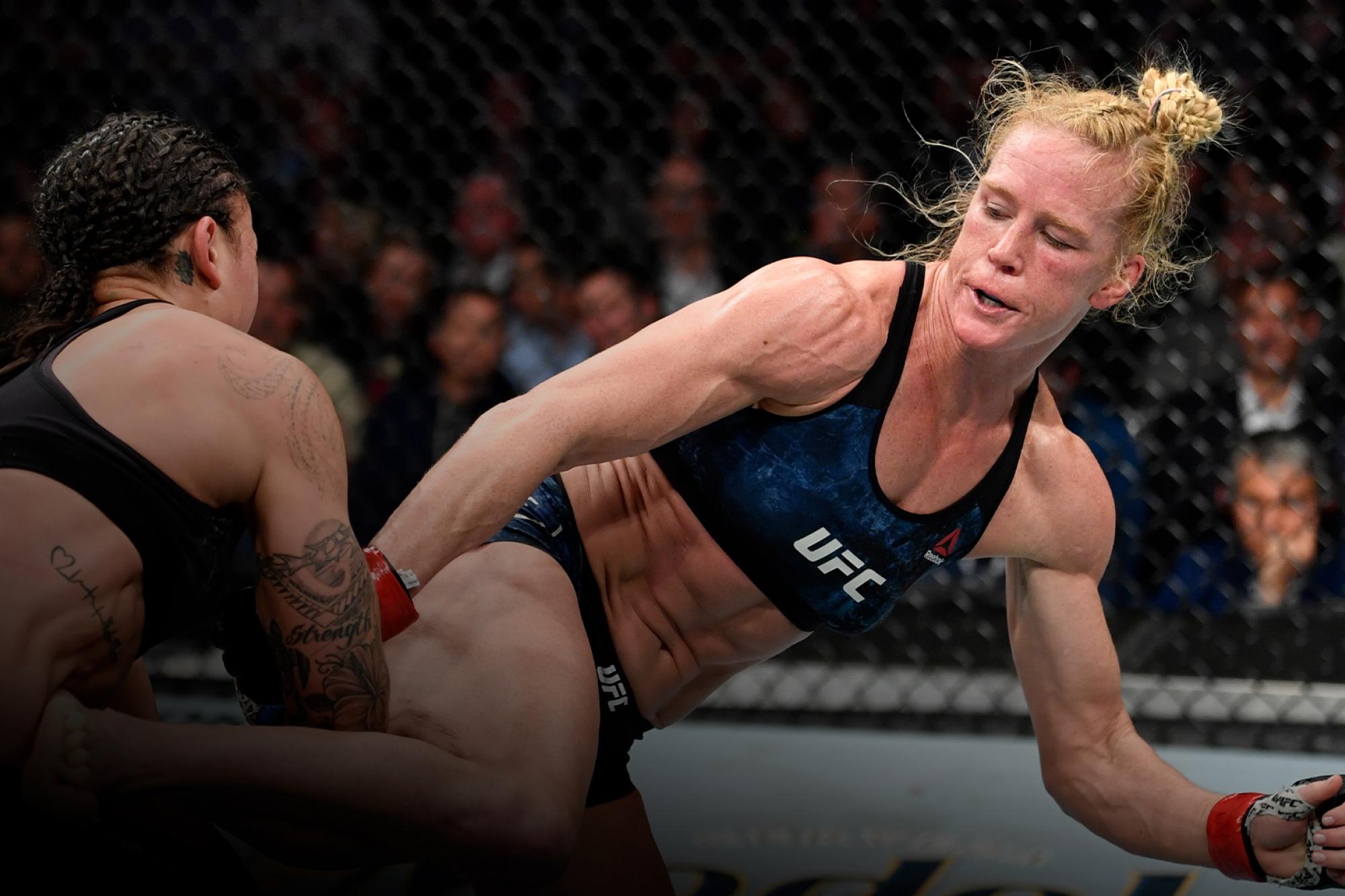 A fantasy-centric look at some featured bouts at UFC Fight Night: Holm vs Aldana on Fight Island
By Zac Pacleb, on Twitter: @ZacPacleb • Sep. 30, 2020

The action on Fight Island rolls along with an intriguing matchup in the women’s bantamweight division as the streaking Irene Aldana gets her shot at validation as a real contender when she takes on former champion Holly Holm in the UFC Fight Night main event.

Another pair of top 5 bantamweights get busy when Germaine de Randamie returns for the first time since falling to Amanda Nunes to fight Julianna Pena, who is eager and hungry to prove herself worthy of a title shot sooner rather than later. And a pair of all-action UFC veterans look to halt their losing skids with a dance partner who is also willing to throw down and put on a good show. To get a better idea of what might go down in these matchups, we dove into the numbers to see if a clearer picture would emerge.

(All stats according to UFC’s Record Book as of September 30, 2020, and only include active athletes in their respective division unless noted otherwise)

What It Means: While Holly Holm’s reputation comes from her extensive, world championship boxing and MMA pedigree and her historic knockout win over Ronda Rousey, Holm’s biggest strength of late might be in her ability to adapt to each opponent. Wherever her opponent is weakest, Holm is adept at using her well-rounded skillset to deny her foe any success, whether it’s in her distance management on the feet or in her strong grappling ability. Holm’s physicality and technique allows her to find comfort in various facets of a fight and, as always, her striking ability warrants the respect of any fighter across from her.

What It Means: Aldana’s standout trait is her boxing, not just offensively but also in her countering and defensive ability, as well. Her footwork is impressive whether she is pressing the action or staying on the outside and setting traps, and she throws great volume without getting reckless. Aldana is always shifting her way into the pocket, bobbing her head and moving her torso as she engages. Thus far, she has shown good takedown defense and uses her long, 5-foot-8 frame to shuck off grappling engagements.

What to Look For in the Fight: This bout is Aldana’s toughest test to date, and Holm has yet another chance to solidify her position at the top of the division by taking out a streaking contender. Aldana has shown improvements each time she has entered the Octagon, and how she handles Holm’s chameleon-like ability to morph into her opponent’s most frustrating nightmare is key to this bout. While both are technically sound and strong strikers, Holm likely has the grappling advantage, so if she presses her advantage there early, it wouldn’t be surprising to see a good chunk of the bout happen against the fence and in clinch situations.

What It Means: Germaine de Randamie might be the most credentialed striker in all of women’s MMA given her kickboxing resume. Her ability to dart in and out of the pocket, manage distance and throw with heat makes her a constant threat on the feet. To watch GDR strike is a beautiful sight. Whether she is pressing forward and walking her opponent down or shifting angles on the outside, her awareness on the feet is evident, and she is equally adept at doling out punishment in the clinch.

What It Means: Pena can impose herself physically on everyone she faces and she likes to press forward, get on top and wear her opponent down over the course of the fight. She puts a pretty decent pace on her opponent and has improved her striking to blend into clinch and takedown situations.

What to Look For in the Fight: Although Pena is a game opponent and likes to throw her hands, her best path to victory is likely through grappling and wearing down de Randamie, who will almost always have the advantage on the feet. If de Randamie stays vigilant about remaining light on her feet, sticking, and moving like she has hinted at ahead of this bout, then Pena will need to problem solve and really press de Randamie against the fence to negate her kickboxing attack. Pena can physically dominate grappling exchanges and has some pretty slick transitional moments in fights, as well, should de Randamie go for anything tricky in those moments.

What It Means: While “The Natural Born Killer” has fallen on hard times of late, he is still as down for a scrap as any fighter on the roster. Condit is always solid at blending in his strikes and pressuring his opponent with smooth, long combinations, rarely ever just going one at a time. When is able to flow on his feet, few fighters are as dangerous. He is slick with submissions and has plenty on his record (13), but it’s his striking ability that is always the eye-catcher.

What It Means: As tough as they come, Court McGee is a pressure-forward fighter who is well-rounded and threatens for a finish wherever the fight may go. He likes to physically impose his will in the fight, whether that comes through clinching his opponent against the fence or wearing them down with his pressure. McGee has only been finished once and has shown a great ability to take a shot and recover quickly to stay in the fight. He is a grinder who likes to keep a decent pace and is able to maintain it over the course of a fight.

What to Look For in the Fight: This battle between UFC veterans has all the technical goods, but at the end of the day, Condit and McGee are two guys who love to throw down and put on a tough fight. McGee will likely look to negate Condit’s flowing striking game by pressuring Condit up against the fence and looking to take Condit down, whereas Condit is always looking for the finish, and finishing McGee would be a feather in his cap and a stop to his five-fight skid.