"It’s just great what Zuffa has done to promote the sport - not just the
UFC - but the sport of mixed martial arts as a whole. They are promoting
the sport with this Fan Expo." - Matt Hughes 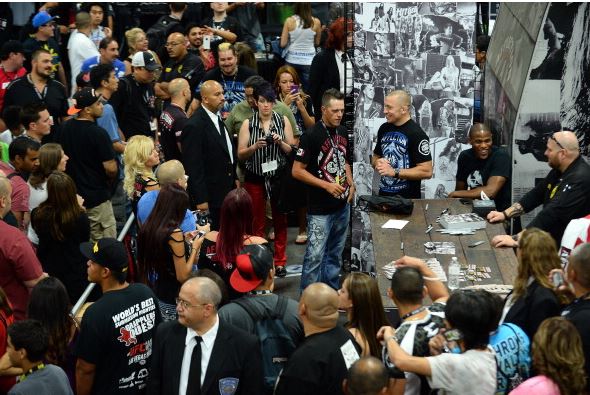 The exhibition took place on July 5 and 6 in conjunction with the UFC’s Fight Week 2013 celebration, with the fan-based experience leading up to Saturday night’s UFC 162, where Anderson Silva saw his record-breaking reign of dominance ended by undefeated upstart Chris Weidman.

While the biggest fight of the summer brought the masses to the MGM to cap off the four-day run of scheduled Fight Week events, it was the Fan Expo that allowed flocks of the UFC’s faithful fanbase to interact with a large cast of the promotion’s biggest stars.

Champions past and present, such as the likes of welterweight title holder Georges St-Pierre and icon Chuck Liddell, were in attendance on Friday and Saturday offering photo opportunities and autographs at meet and greet sessions, while over 70 additional UFC fighters were also in attendance to do the same.

Fans were treated to Q & A sessions from UFC President Dana White, Chael Sonnen, Joe Rogan and Ronda Rousey, as well as the Hall of Fame induction of original TUF alums Forrest Griffin and Stephan Bonnar.

This annual Fourth of July extravaganza was the biggest since the promotion began hosting the UFC Fan Expo back in 2009, and the event’s continued growth is something the participants have certainly taken notice of.

“This was something I never expected just because of where the UFC was back in the SEG days,” Hall of Famer Matt Hughes offered about the increased magnitude of the sport. “SEG had the UFC before Zuffa bought the company, and the direction they were going was nowhere near the place we are going now.

“The Fan Expo is a great example of how great the UFC fans are. There are at least three to six times more people at the Fan Expo than we had at live events during the SEG days. It’s just great what Zuffa has done to promote the sport - not just the UFC - but the sport of mixed martial arts as a whole. They are promoting the sport with this Fan Expo.” 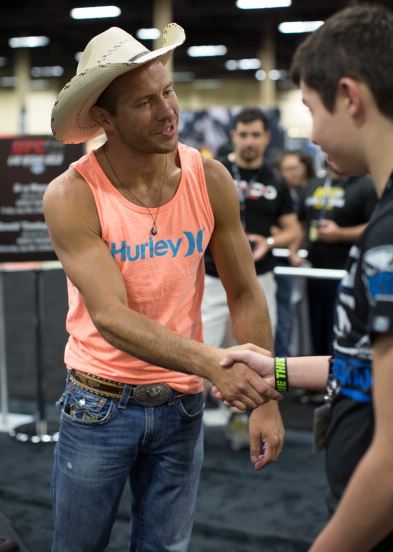 Where the former welterweight champion helped usher in a new generation of fans at the beginning of the Zuffa era, a collection of current stars are working hard to welcome the next wave, and helping to lead that charge is lightweight contender Donald Cerrone.

While “Cowboy” originally established a fan following while competing in the WEC, the Jackson’s MMA fighter’s profile has drastically increased since transitioning to the Octagon. The changes are not lost on Cerrone, as the magnitude of his career has grown in stride with the sport.

“I remember when I was in the WEC and the UFC asked me to come to the Fan Expo,” Donald Cerrone said. “They had me signing next to Chuck Liddell, Randy Couture, Rashad Evans and people would just pass me by. I was like, ‘Damn…one day.’ It is cool to be there and have people come by shouting my name. Just to see the growth of all of this and how it has affected me personally is a cool thing. I can’t speak for anyone else but to me it’s awesome. I think this is the only sport that offers this type of fan interactive experience and I think it’s a great thing.”

While the fighters in attendance were conscious of the continued growth of the sport, there was perhaps no better example of change and progress in MMA than Ronda Rousey. The women’s bantamweight champion is largely responsible for opening the door for female fighters to compete in the UFC and has built a fan base that spans both genders.

“It’s nice to see there is a different demographic being attracted to the sport,” Rousey said. “It really makes me feel like I’m doing something to help the sport of mixed martial arts. I can feel the magnitude change for me personally but I can also see changes in the way people see the sport as well. In order for people to respect what he do, and society as a whole to respect the sport, we have to be respectable. When people grab onto that, they start to make it part of their lives. 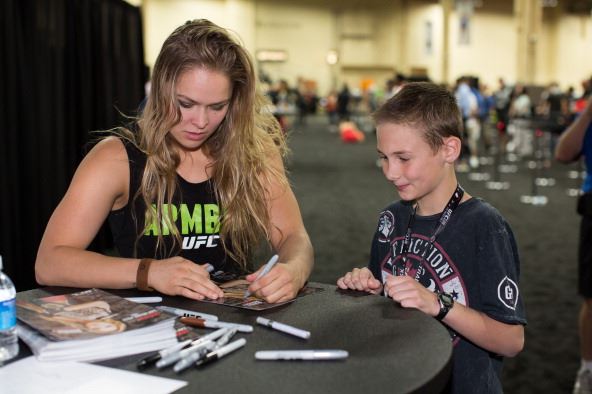 “I’m not saying eight-year-olds should take up cage fighting, but you can see young kids starting to get into martial arts more and more. And because of that, the parents are getting into better shape and taking better care of themselves, and that only happens when your sport has become ingrained in the culture. By bringing women in, you effectively double your fan base.

“One thing I remember that really pissed me off before this change came when I was at the UFC Gym in Torrance,” Rousey added. “Above the men’s locker room there was a picture of a man fighting, but above the women’s locker room there was a woman holding a ring card. I was like, ‘What the hell? The men are aspiring to be fighters but this is what the women are aspiring to?’ It really bugged me and it was something I said I was going to change. I knew in my head, one day there was going to be a women’s picture up there and when we went to open the new location in New York City, sure enough there was my picture.”