Step into the Octagon® and get closer to the action of the Ultimate Fighting Championship® than ever before with your ultimate fight center on Xbox 360. Available for download today for all Xbox LIVE subscribers, UFC® on Xbox LIVE® allows you to experience the intensity and excitement of the world’s fastest growing sport from one central hub – your Xbox 360. 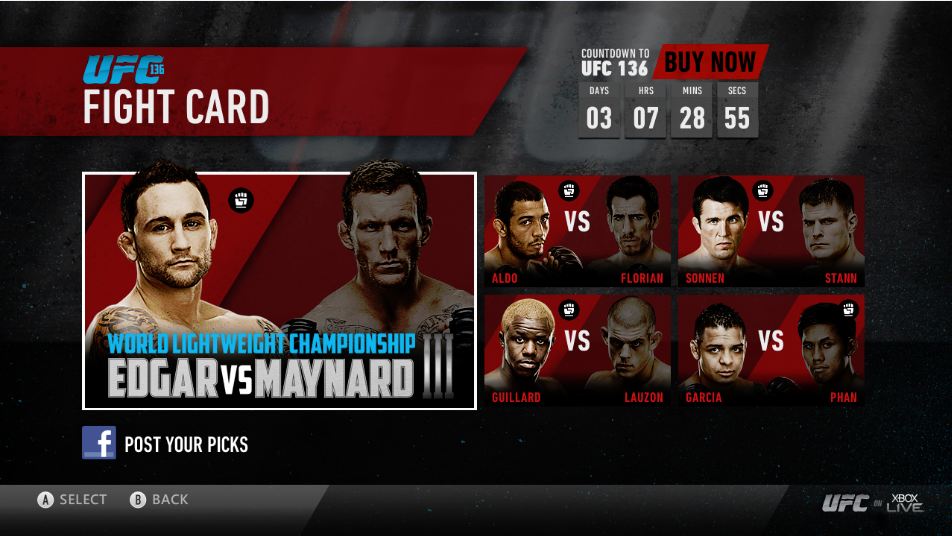 To celebrate the launch, UFC on Xbox LIVE will make available UFC® 141: LESNAR vs. OVEREEM on Saturday, Dec. 30 for free to the first 25,000 fans that complete the order process.* These fans will be able to make predictions and prepare for a night of epic fights by watching the weigh-ins, pre-fight press conferences and other related videos live or via the on-demand library. **

All Xbox LIVE viewers who download the app will be able to purchase Pay-Per-Views using the service starting with UFC 142 on January 14.

For the first time, Xbox 360 and Xbox LIVE deliver all the heart-pounding UFC action you crave. Purchase Pay-Per-View events in stunning HD, compete with friends in an exclusive fight prediction game, measure your success via friends leaderboards, access the interactive Fight Card, and view pre-fight weigh-ins, press conferences and previews live or through an expansive on-demand video catalogue, only on Xbox 360. 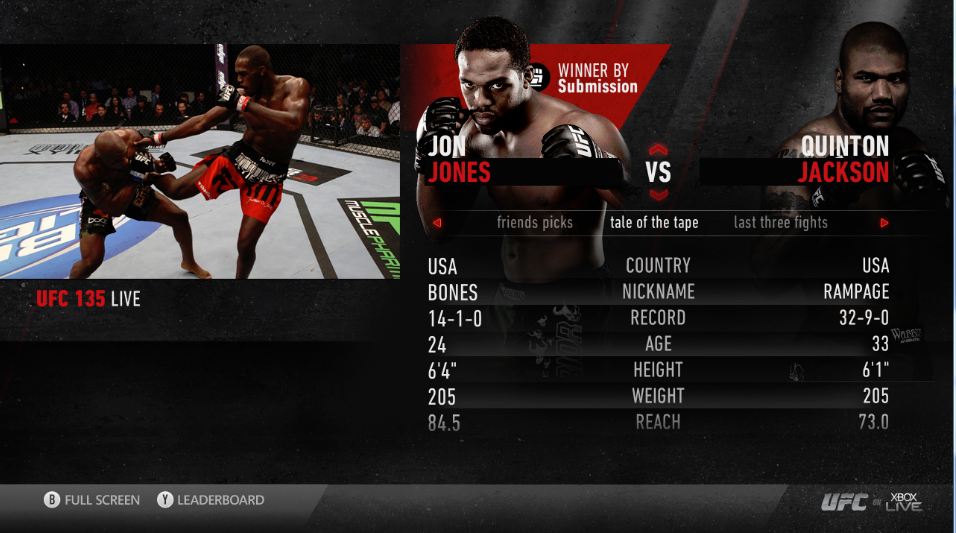 Check out the latest sizzle reel to see the application in action, and hear what UFC President Dana White and UFC Hall of Fame legend Chuck “The Iceman” Liddell are saying about UFC on Xbox LIVE. To watch the sizzle reel, click here.

Broadcasting live from the MGM Grand Garden Arena in Las Vegas at 10 p.m. EST / 7 p.m. PST on Dec. 30, UFC 141 is headlined by a title contender bout between former eavyweight champion Brock Lesnar and international superstar Alistair “The Demolition Man” Overeem.  In addition, UFC 141 is set to usher in the New Year with an entire night of action-packed fights between the UFC’s most elite talent, including Nate Diaz, Donald “Cowboy” Cerrone, Jon Fitch, Johny Hendricks and more.

*UFC on Xbox LIVE Holiday Gift Promotion is a limited time offer good only to the first 25,000 Xbox LIVE members (Free (Silver) or Gold) in the United States and Canada age 18+ to order the UFC 141 Pay-Per-View event on Xbox LIVE. Valid credit card required for order. Limit one PPV event per account. Offer ends at 11:59pm PST on December 30, 2011, or while supplies last. This offer is not transferable, not redeemable for cash, and not combinable with any other offers. Microsoft will not be responsible for any late, lost, misrouted, or non-delivered e-mails—or any other network, Internet, or other computer- or communications-related failures—caused by events beyond the reasonable control of Microsoft. Sponsor: Microsoft Corporation, One Microsoft Way, Redmond, WA  98052.