The UFC Encyclopedia will capture all facets of the UFC, detailing the
history of the organization from its beginnings in 1993, and providing
comprehensive coverage of over 300 fighters, champions, Hall of Fame,
and over 170 event results. 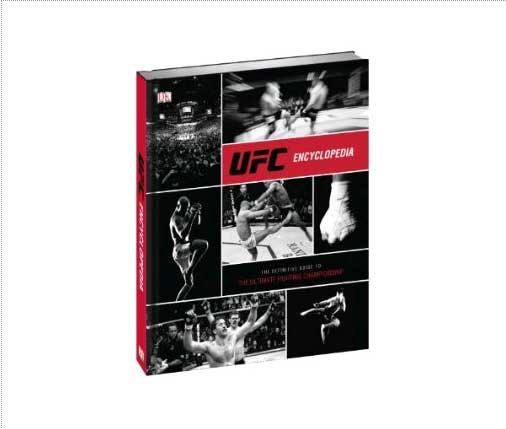 DK Publishing announced today that the company will publish the officially licensed encyclopedia to the Ultimate Fighting Championship®, one of the fastest growing sports organizations in history. The UFC Encyclopedia will capture all facets of the UFC, detailing the history of the organization from its beginnings in 1993, and providing comprehensive coverage of over 300 fighters, champions, Hall of Fame, and over 170 event results.

The book, which is scheduled for publication in October 2011, will give fans unparalleled insights into the UFC universe in 400 full-color pages. It will include unprecedented access to the most dynamic fighters in the world, through profile and action photos, detailed biographies, win/loss records, vital stats, and titles held in the organization.

“We began discussing a project of this scale with the UFC a few years ago and we are thrilled that we are finally able to bring a book like this to life for MMA fans,” says Mike Degler, Publisher of the UFC Encyclopedia. “The UFC has an incredibly rich eighteen-year history, and we have been given unprecedented access to all of it. The UFC Encyclopedia will be a must-have for any MMA fan, as well as an informative and comprehensive tribute to the world’s fastest growing sport.”

“Very few people keep their thumbs on the pulse of the UFC like Tom Gerbasi, the author for the UFC Encyclopedia.” says Christian Sumner, Project Lead for the UFC Encyclopedia. “His event coverage will make readers feel like they were cageside, and his detailed fighter profiles are punctuated by quotes that he’s gathered through years of interviews,” Sumner continues, “which will give fans unparalleled insight into their favorite fighters’ psyches. This kind of in-depth and behind-the-scenes access is what every UFC follower is looking for, and we are proud to be playing a part in bringing it to the fans!”

The UFC Encyclopedia is the book that millions of devoted fans worldwide have been waiting for. DK Publishing has secured a world language deal and expects to publish the book in many territories, and in foreign languages.