Exclusive look inside only on the UFC Facebook page!

Pre-order yours at UFC Store

The fastest growing sports organization in history finally has an official and definitive resource that will have its fans cheering: UFC® ENCYCLOPEDIA (October 2011, $50). 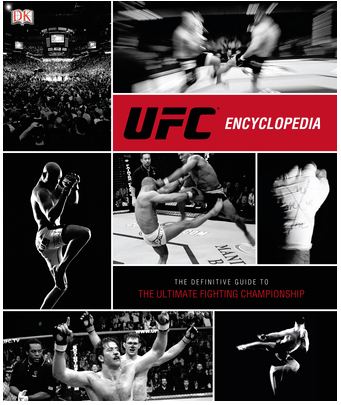 The first and only official and fully illustrated encyclopedia of the UFC® covers over 300 fighters and over 170 event results. This full-color 400 page compendium is filled with over 1,500 images and captures all facets of the Ultimate Fighting Championship®, detailing the history of the organization from its beginnings in 1993. The encyclopedia includes unprecedented access to the most dynamic fighters in the world, through profile and action photos, detailed biographies, win/loss records, vital stats, and titles held in the organization.

This book reveals:
* The history of the UFC® from its inception
* The most memorable submissions, knockouts, and fights
* Fighter profiles, complete with biographies and vital stats
* Results for every event, standout performances, rivalries, and influential matches
* Breakdown of UFC® Champions from the first crowned to present day
* Season recaps of The Ultimate Fighter® reality TV show
* UFC® Hall of Fame

The UFC® ENCYLOPEDIA features all of the faces of the UFC®; from the owners, Dana White and Frank & Lorenzo Fertitta, to the Octagon girls, announcers and broadcasters. Fans will relish this informative and comprehensive tribute to the world’s fastest growing sport. Officially licensed, created in conjunction with the UFC®, and featuring spotlights on memorable submissions, knockouts, and battles that made history, this is the book that millions of devoted fans have been waiting for and it is a book no UFC® fan should be without.