UFC Fight Night Dublin on 3e in Ireland reaches a total of 600,000 individuals and becomes the highest rated sporting event in the channel’s history. 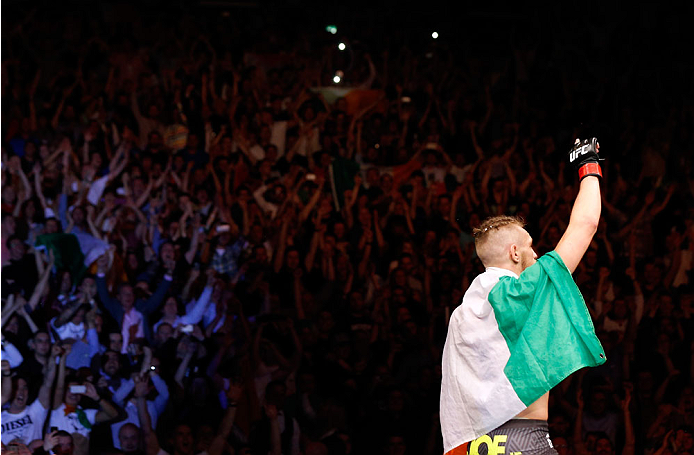 Saturday night’s UFC Fight Night Dublin has punched above its weight to become the highest rating sporting event on 3e in Ireland.

Coverage of the MMA showdown reached a whopping 600,000 viewers in total and recorded a peak audience figure of 340,200. An impressive average of 257,500 viewers (and 21% share of the available audience) tuned in to 3e on Saturday night to watch Conor ‘The Notorious’ McGregor put on a spectacular performance to defeat Brazil’s Diego Brandao in his hometown of Dublin, making it the highest rating sporting event in the channel’s history.

The sold-out event at Dublin’s O2 arena, which also featured fellow UFC names Gunnar Nelson and Norman Parke, delivered massive share figures for a number of demographics, including a 36.69% share for Men 15-34 and an even more impressive 43.33% share for Adults 15-24.

Jeff Ford, TV3 Group Director of Content, said: “Saturday night’s fantastic UFC ratings prove that there is a real hunger for MMA in Ireland, in particular Ireland’s own star attraction and showman Conor McGregor. 3e was the first broadcaster to take the plunge and broadcast UFC Live and Free to Air and the feedback from our viewers has been great.  We would like to thank our friends and colleagues from the Ultimate Fighting Championship for their support and help and we look forward to continuing our relationship with them in the future.”

Garry Cook, VP and GM UFC EMEA said: "This was a night that will go down in history within the UFC for the record sell out and viewership figures. The collaboration between UFC and TV3, not just on the night, but in the weeks and days leading to the event has shown how an integrated partnership can benefit both organisations. Throughout the week, TV3 and 3e aired amazing content and were able to access the athletes across a number of platforms, building anticipation and ultimately driving the record breaking audience. We would like to congratulate our friends at TV3 and we look forward to bringing more UFC events in the future."

You can still watch the whole event on UFC FIGHT PASS.