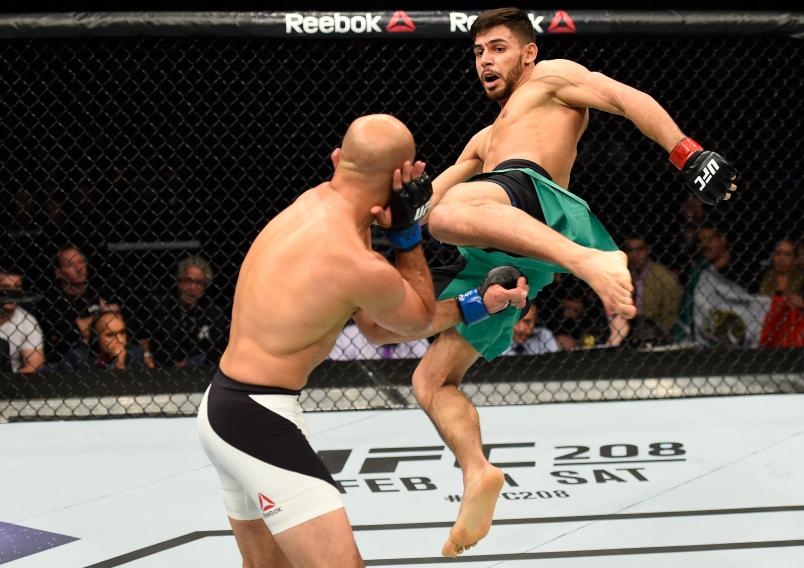 An injury to Frankie Edgar forced a change to the main event, but the featherweight fight headlining the UFC's 25th anniversary card should be a showcase for two of the most explosive fighters in the 145-pound division. “The Korean Zombie,” Chan Sung Jung, has built a reputation on his incredible offensive output and an undying will to never go away in any fight. Jung came back from more than three years away in his last fight and earned a stunning first-round knockout. With a 4-1 record in his past five fights — all ending by knockout or submission — Jung is ready to get back into title contention with a win on Saturday night. Opposing him will be Yair Rodriguez, who still carries the prospect label but is undoubtedly one of the most exciting fighters in the division. Rodriguez has a 6-1 record in the UFC, including victories over the likes of BJ Penn, Andre Fili and Dan Hooker. Now he will look to get the biggest win of his young career when he faces Jung in the main event from Denver.

Former training partners turned adversaries, Donald “Cowboy” Cerrone and Mike Perry will meet in what will almost assuredly be a knock down, drag ‘em out slugfest. Cerrone is a knockout striker with dynamite in his hands and feet with statement wins at welterweight, including a vicious finish over Matt Brown, as well as Rick Story. Meanwhile, Perry is one of the most aggressive, hard-hitting fighters in the world at 170 pounds and he throws everything with bad intentions. If this bout makes it into the third round, there's a chance it could already be a contender for Fight of the Year, considering the way these two fight every time they step into the Octagon. 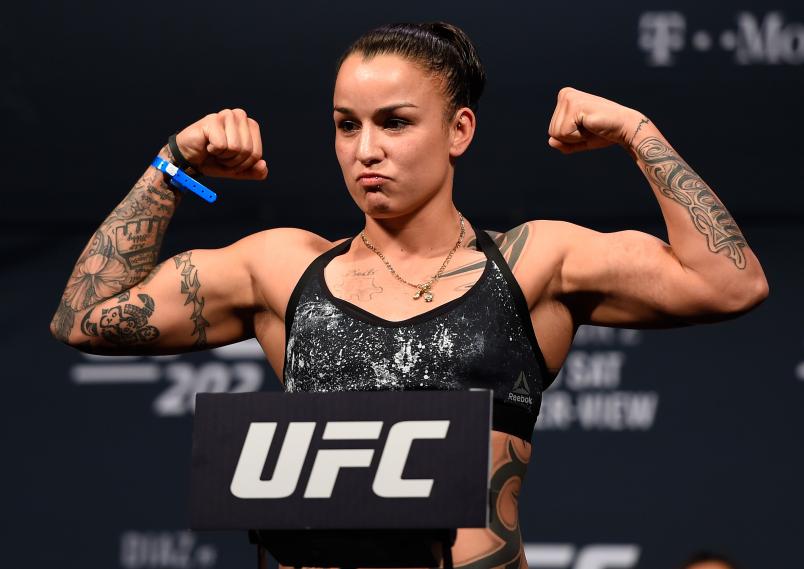 A pivotal matchup in the women's bantamweight division will see former title challenger Raquel Pennington take on former women's featherweight champion Germaine de Randamie in her return to the 135-pound division. Pennington is one of the most durable, gritty fighters on the entire UFC roster and she has a never-say-die attitude that makes her a tough out for anybody. De Randamie is coming back from a long layoff, but with a three-fight win streak, including a victory over former champion Holly Holm, she hopes that beating Pennington will get her back into title contention at bantamweight.

With a win over current flyweight champion Henry Cejudo on his resume, Joseph Benavidez has to know how important a strong showing in his fight against Ray Borg could put him back into title contention in 2019. Benavidez is coming off a heartbreaking split decision to Sergio Pettis in his last fight, so he will definitely look to turn things around on Saturday night. As for Borg, he will be coming back for the first time since losing to former champion Demetrious Johnson, but a statement win over Benavidez puts him right back into the hunt at 125 pounds.

Undefeated 20-year old prospect Maycee Barber will make her UFC debut after an incredibly impressive showing on Dana White's Tuesday Night Contender Series back in July, when she earned a dominant third-round TKO. Barber is one of the best up and coming talents in the strawweight division, but she'll be tested this weekend against fellow newcomer Hannah Cifers, who comes in with an 8-2 record, including five straight victories with four of those ending by way of knockout.

Michael Trizano just recently became the latest Ultimate Fighter champion, but one person he never got the chance to face was Luis Pena, who was forced out of the competition due to injury. Now these two undefeated lightweights will meet in the kickoff bout on the main card with bragging rights on the line, not to mention that only one of these fighters is leaving Denver with their undefeated record intact. Both had strong showings in their respective debuts, so now Trizano will clash with Pena with the winner immediately becoming a prospect to watch in 2019.

In a classic “striker versus grappler” showdown, former Ultimate Fighter competitors Ashley Yoder and Amanda Cooper will face each other in the featured prelim from Denver. Yoder is a tricky ground fighter with slick submissions at her disposal, while Cooper has shown good hands and technical boxing throughout her career. Both fighters are coming off losses so expect Yoder and Cooper to pull out all the stops to get the job done. 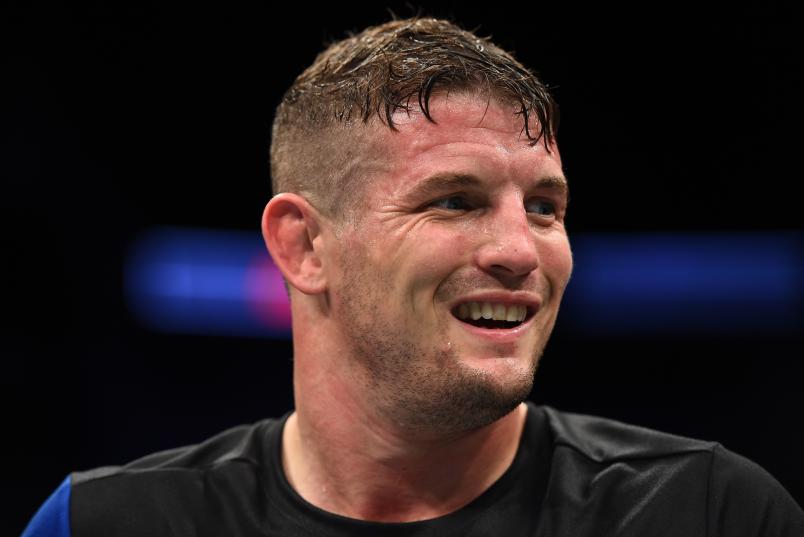 Chas Skelly celebrates his submission victory over Chris Gruetzemacher in their featherweight bout during the UFC Fight Night event at the Toyota Center on February 4, 2017 in Houston, Texas. (Photo by Jeff Bottari/Zuffa LLC/Zuffa LLC via Getty Images)

A massive fighter for the featherweight division, Chas Skelly will look to bounce back from a loss in his last fight when he takes on UFC newcomer and Dana White’s Tuesday Night Contender Series veteran Bobby Moffett. Moffett has won five of his last six fights, including back-to-back victories with the same Brabo choke submission. Now he'll look to make an impact in his UFC debut against one of the toughest fighters in the 145-pound division in Skelly.

Following the toughest stretch of his career with an 0-2-1 record in his past three fights, Beneil Dariush will look to get back on track when he takes on UFC rookie Thiago Moises. Moises is another Contender Series discovery who trains out of the famed American Top Team academy in Florida. Moises will look to make a big impact with a win over a legitimate top 15 threat at lightweight, but Dariush will certainly do everything to stop him when they meet in the Octagon.

Exciting lightweight prospect Devonte Smith will make his UFC debut against former Ultimate Fighter competitor Julian Erosa on Saturday night. Smith is a lightning bolt every time he steps into the cage, with a non-stop action style that has earned him eight career victories without going to a decision in any of them. Erosa will look to stop Smith's current four-fight win streak while he looks to build on his knockout win on the Contender Series back in June. 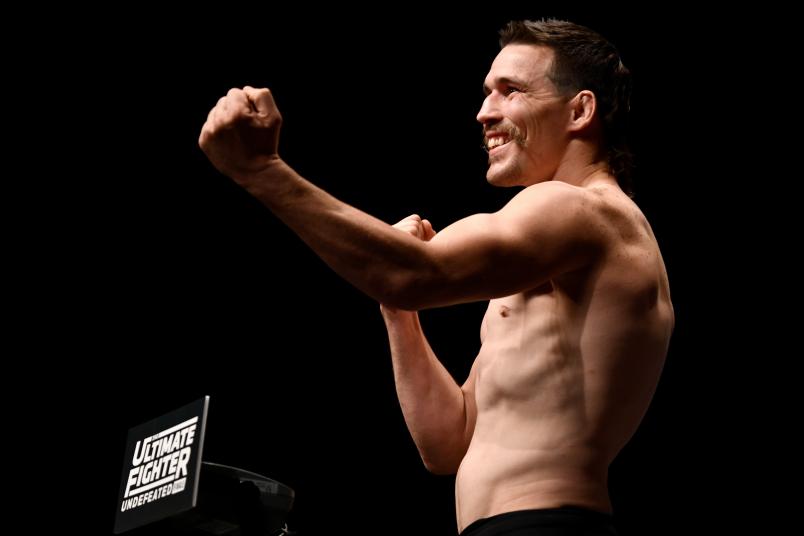 Davi Ramos might be one of the best Brazilian jiu-jitsu practitioners in the UFC today and he's proven that with back-to-back submission wins. To get a third in a row he'll have to go through Ultimate Fighter veteran John Gunther — a leather tough lightweight and a mauling brawler who trains alongside former heavyweight champion Stipe Miocic in Cleveland.

Joseph Morales suffered the first loss of his career in his last fight and he doesn't want to make it two in a row when he faces Eric Shelton at flyweight. Shelton is similarly positioned after dropping three of his last four fights and there's no chance he wants to fall again when facing Morales on the early prelims.

Mark De La Rosa fell short in his short notice UFC debut, but he bounced back in a big way in his last fight after pulling off a second-round rear naked choke submission. Now De La Rosa will take on a veteran opponent in Joby Sanchez, who comes into the fight with a 4-1 mark in his past five fights while training alongside some of the best fighters in the world at the Jackson-Wink academy in New Mexico.