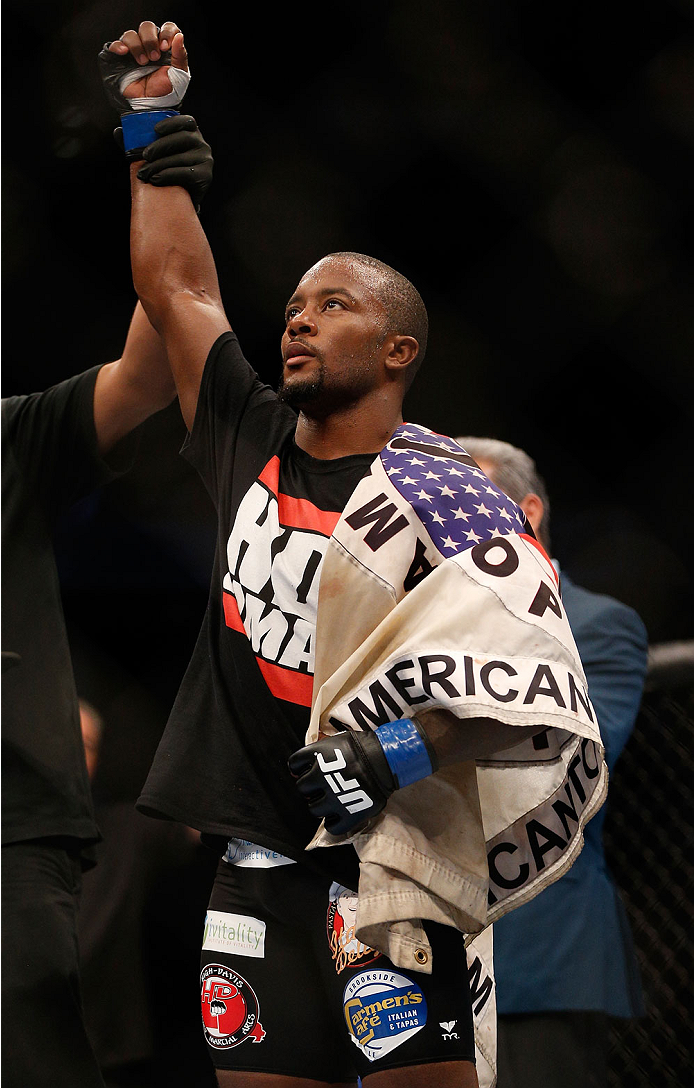 Jason High fought around the world, picking up wins in Japan, Guatemala, Canada, and the good ol’ US of A over the course of his career, beating the likes of Hayato Sakurai, Jordan Mein, and Andre Galvao along the way. But there was something about getting a victory in the organization that had the letters U-F-C that eluded him in two tries against Charlie Brenneman and Erick Silva.

“I knew I can win at this level,” said High. “The most frustrating thing was going in there after having training camps and doing well, and just not performing. That was the main thing that bothered me.”

But in August, he put those UFC demons to rest, submitting James Head in the first round to finally get his first Octagon victory. In typically low-key fashion, “The Kansas City Bandit” is happy about the win, but not making it like his work here is done yet.

“It’s just nice to get in and get out quick,” he said of the win, which lifted his pro record to 18-4. “It really was nice to kind of get that monkey off my back, but after I got over that, it’s just like any other win, and you get ready for the next one. But it definitely felt good.”

What the victory did was keep High’s UFC career alive, as well as allow him to get started on a new stretch like the seven-fight winning streak he put together after the 2010 loss to Brenneman. This time though, he’s getting ready for fights with a new attitude when it comes to his training regimen.

“After the Silva fight I did change a few things,” said the 32-year-old. “I started to get a little bit more rest because I think I was running my body into the ground a little bit, so that’s one of the main things I changed. But everything else, I’m still trying to get better everywhere and I’m still working hard, but I’m trying to rest as hard as I work now.”

“You try to get good sleep at night, as many hours as you can get, recovering right, eating right, and it’s really important,” High explains. “I read somewhere that your workouts should be planned around your recovery, and not the other way around. The Brenneman fight and the Silva fight, I got into these modes where I was working out all the time and overworking myself basically. Especially with the Brenneman fight, I was like ‘I’m in the UFC, let’s pick it up.’ And I was just doing too much. Same thing with the Silva fight, I was just running myself into the ground.”

In a lot of ways, it’s the wrestler’s mentality – when in doubt, work harder. And for the former University of Nebraska wrestler, this new way of doing things has taken some getting used to.

“It’s difficult still to pull it back a bit and rest a little more because you feel like you’re missing out on some things, but I’ve got to make myself do it and I can see the difference in my workouts everywhere.”

This Saturday, High will be back in the Octagon to face MMA veteran, but UFC debutant, Anthony Lapsley. The 25-5, 2 NC Lapsley has impressed over the years with a ground game that has produced 17 submissions, but with only two fights since 2011, High isn’t too sure what he’ll be seeing on fight night. He is expecting the best version of Lapsley though.

“You can’t really take a guy like that lightly,” he said. “He’s got a lot of experience and a lot of big fight experience fighting tough guys. But he’s kind of a wild card – you don’t know how he’s gonna look or how he’s gonna come out.”

High has a good idea of how he’d like to come out on Saturday in Las Vegas – with a win to end this year and a bright outlook for the next.