Big news from inside and outside the Octagon filled headlines in 2016, setting a high bar for 2017 to follow, but the UFC was not intimidated in the slightest by such expectations. In fact, it came out firing after a pair of January shows with its first visit to Brooklyn, New York in February.

On that UFC 208 card in Barclays Center, the promotion’s newest division crowned its first champion, as Germaine de Randamie outpointed Holly Holm to win the women’s featherweight crown. Also on the card, it was a good night for Brazil, as Anderson Silva, Glover Teixeira, “Jacare” Souza and Wilson Reis all notched wins for the South American MMA hotbed.

In March, Las Vegas hosted its first event of the year, with Tyron Woodley retaining his welterweight title via decision in his UFC 209 rematch against Stephen Thompson.

May saw two more champs keep their belts intact, as Stipe Miocic defeated Junior Dos Santos and Joanna Jedrzejczyk beat Jessica Andrade, and in June, Max Holloway made it official as he stopped Jose Aldo in Rio to become the undisputed featherweight champion of the world. 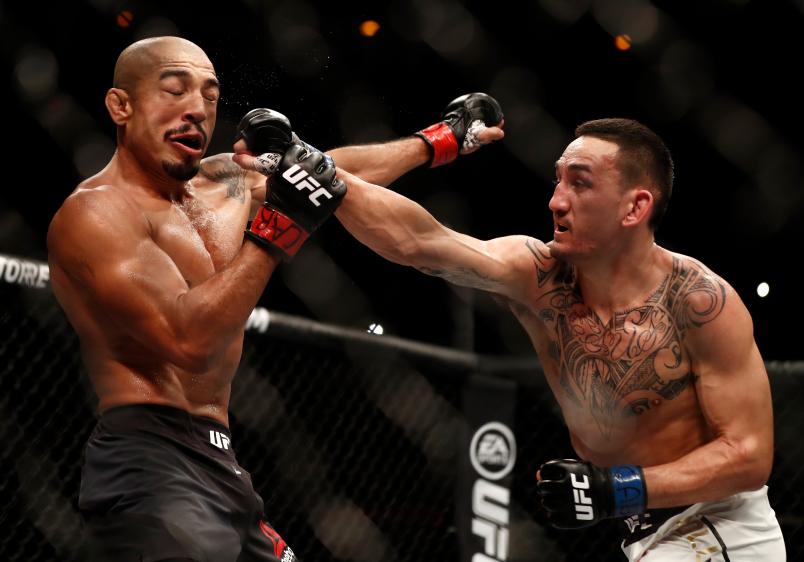 It had been a fairly quiet first half of the year in the Octagon, but business picked up considerably on International Fight Week, as Justin Gaethje made his long-awaited UFC debut with a Fight of the Year stoppage of Michael Johnson on July 7. That same night, Jesse Taylor won The Ultimate Fighter: Redemption Finale by submitting Dhiego Lima.

The day after that event, Robert Whittaker won the interim middleweight title with a Fight of the Night victory over Yoel Romero in the main event of UFC 213, a bout elevated to that spot when Amanda Nunes was forced out of her bout with Valentina Shevchenko due to illness.

On the Tuesday after UFC 213, it was the premiere of Dana White’s Tuesday Night Contender Series, a show designed to showcase the best up and coming talent from around the world, with memorable performances often earning the winners a UFC contract. Emerging from season one of the DWCS with UFC contracts were the likes of Sean O’Malley, Karl Roberson, Geoff Neal, Grant Dawson and Matt Frevola.

But the July action wasn’t finished yet, as the long-awaited rematch between Jon Jones and Daniel Cormier headlined UFC 214 on July 29 in Anaheim. Again, it was Jones emerging victorious, but he would see the win and his title disappear after a failed drug test.

Also on the card, Cris Cyborg won the women’s featherweight title stripped from Germaine de Ramdamie when she stopped Tonya Evinger, and Woodley retained his 170-pound title with a decision win over Demian Maia.

Following visits to Mexico City and Rotterdam, Nunes and Shevchenko finally got their rematch in Edmonton on September 9, and in the main event of UFC 215, it was “The Lioness” eking out a split decision win over Shevchenko. And though the loss was disappointing for “Bullet,” she would soon have a new title to chase, as The Ultimate Fighter: A New World Champion introduced the women’s flyweight division with a tournament that would crown a UFC champion.

If you’re wondering where Conor McGregor was at this point in the year, don’t worry, he was around, just not in the Octagon, as “The Notorious” one faced off with future boxing hall of famer Floyd Mayweather Jr. in an August 26 boxing match that captivated the world. McGregor would get stopped by Mayweather in the tenth round, but he impressed observers with his showing in his first professional boxing match.

Back in the Octagon, Tony Ferguson submitted Kevin Lee to win the interim lightweight title, while Johnson set the record for most successful title defenses in UFC history with the Submission of the Year over Ray Borg at UFC 216 on October 7. 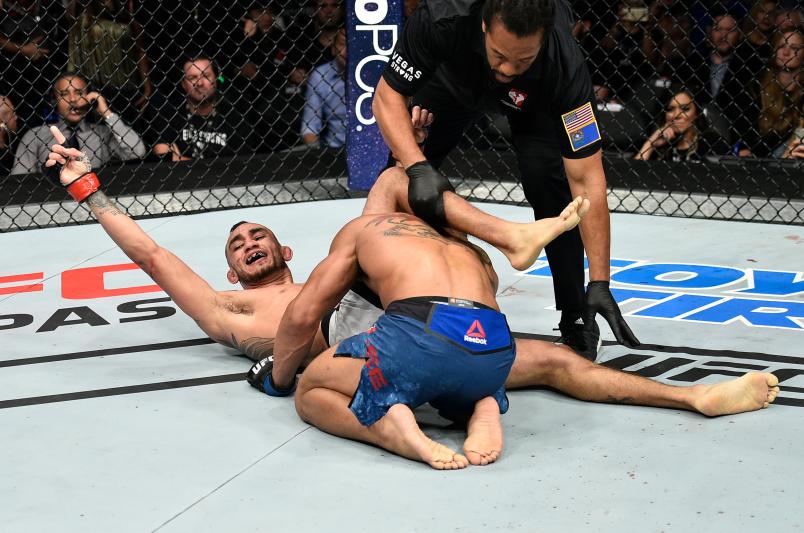 Tony Ferguson celebrates after his submission victory over Kevin Lee in their interim UFC lightweight championship bout during the UFC 216 event inside T-Mobile Arena on October 7, 2017 in Las Vegas, Nevada. (Photo by Jeff Bottari/Zuffa LLC via Getty Imag

In November, the UFC returned to Madison Square Garden with another stacked card, and three titles changed hands, as Georges St-Pierre returned from nearly four years away to take the middleweight belt from Michael Bisping, TJ Dillashaw knocked out former teammate Cody Garbrandt for the bantamweight crown, and Rose Namajunas upset Jedrzejczyk for the strawweight title.

It was a wild month for sure, but December got off to a wild beginning as well, as unheralded Nicco Montano completed her run through the TUF 26 field with a win over Roxanne Modafferi that earned her the UFC women’s flyweight title. The next night, Holloway bested Aldo a second time while Francis Ngannou scored a stunning knockout of Alistair Overeem.

The final card of 2017 was in Las Vegas, and in the main event of UFC 219, Cyborg cemented her place as the best female fighter in the game with a decision victory over Holm to retain her women’s featherweight title. 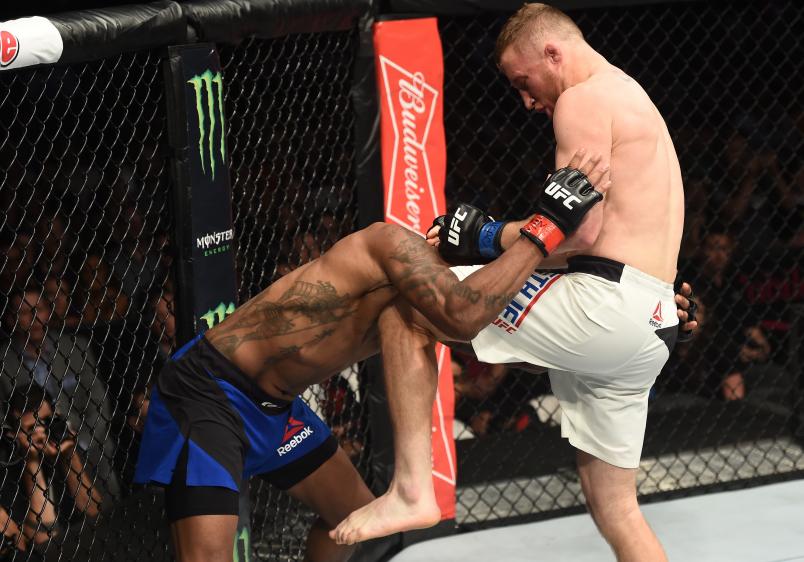 Justin Gaethje knees Michael Johnson in their lightweight bout during The Ultimate Fighter Finale at T-Mobile Arena on July 7, 2017 in Las Vegas, Nevada. (Photo by Brandon Magnus/Zuffa LLC via Getty Images)
KNOCKOUTS OF THE YEAR 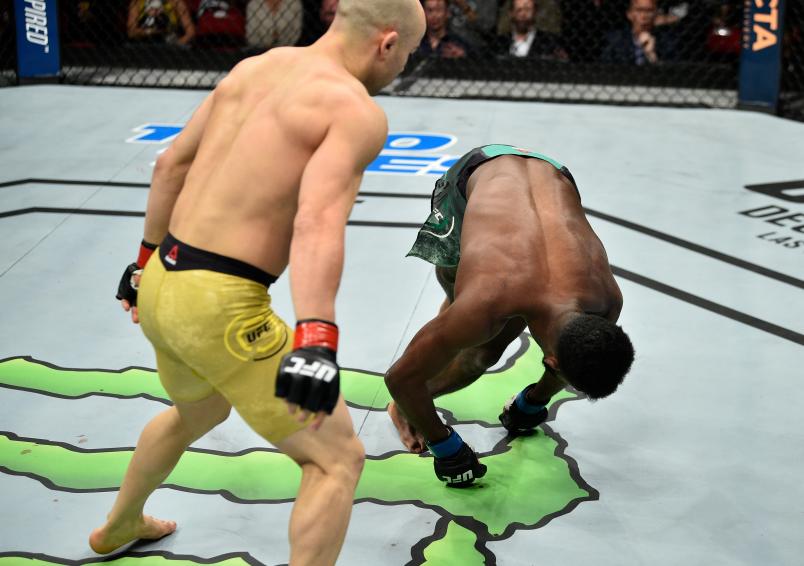 Marlon Moraes of Brazil knocks out Aljamain Sterling in their bantamweight bout during the UFC Fight Night event inside Save Mart Center on December 9, 2017 in Fresno, California. (Photo by Jeff Bottari/Zuffa LLC via Getty Images)
SUBMISSIONS OF THE YEAR