In November of 2014, the UFC made the unprecedented move of announcing its entire 2015 schedule at a press conference aptly titled “The Time is Now,” and it certainly was, as the promotion unveiled 45 events that would take the Octagon from Japan to Canada, Brazil to Mexico, the Philippines to Poland, and all points in between.

It was an ambitious undertaking, but when had the UFC ever played it safe? Never, and the 2015 season got off to a spectacular start on January 3, as the MGM Grand Garden Arena played host to the highly-anticipated showdown between UFC light heavyweight champion Jon Jones and unbeaten challenger Daniel Cormier. The rivalry between the two had produced a press conference brawl, heated staredowns, and plenty of ill will, but when it came down to the UFC 182 main event, none of that mattered.

All that counted was what happened in the Octagon, and when the dust settled, Jones had his eighth successful title defense, as he won a hard-fought but unanimous decision over Cormier.

And that was just the first event of the year. Before January was even through, Irish sensation Conor McGregor secured a shot at the featherweight title with a thrashing of Dennis Siver in Boston, and Alexander Gustafsson got shocked by Anthony “Rumble” Johnson in Stockholm, allowing the resurgent American to leap “The Mauler” and get a crack at Jones’ belt.

The second biggest fight of January though was the UFC 183 main event on January 31 featuring the return of Anderson Silva against Nick Diaz. The five-round bout was often bizarre thanks to Diaz’ taunting, but in the end, Silva had his hand raised once more, thrilling his fans around the world. 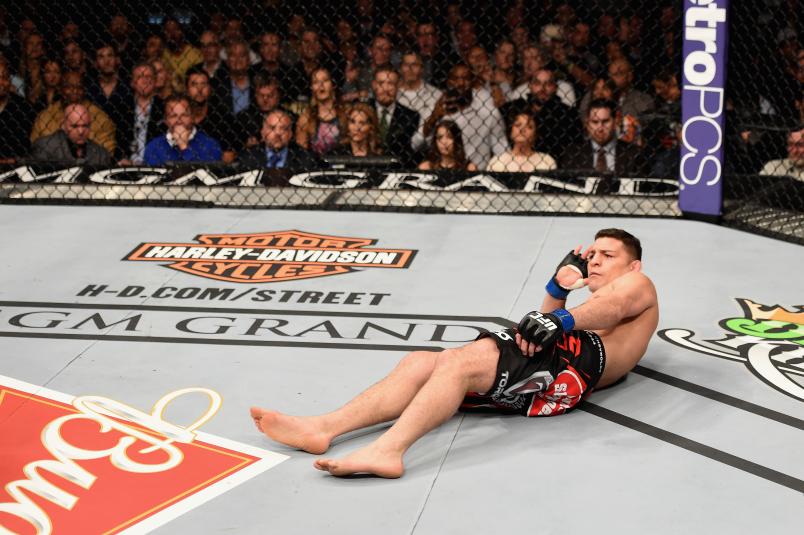 Nick Diaz taunts his opponent in their middleweight bout during the UFC 183 event at the MGM Grand Garden Arena on January 31, 2015 in Las Vegas, Nevada. (Photo by Josh Hedges/Zuffa LLC via Getty Images)

At UFC 184, the young lady who had become the UFC’s biggest star, Ronda Rousey, continued to dominate the women’s bantamweight division, this time defending her title with a 14-second submission of unbeaten number one contender Cat Zingano. With that victory, Rousey had finished her last three opponents in a combined 96 seconds.

Yet while there seemed no championship belt more secure than the one around Rousey’s waist, two titles changed hands two weeks after UFC 184, with Poland’s Joanna Jedrzejczyk dethroning women’s strawweight champion Carla Esparza, and Rafael Dos Anjos taking the lightweight title from the grasp of Anthony Pettis. Those UFC 185 upsets proved that on any given night in the UFC, any of these well-trained elite athletes can win.

A month later, on April 11, the UFC made its first visit to Poland, one of four new international locales the promotion stopped in during the year, along with the Philippines, Scotland and South Korea. On that card, it was a rematch eight years in the making, with Mirko Cro Cop evening the score with Gabriel Gonzaga via third-round TKO.

By May, the long reign of Jon Jones had come to an end, not by anything that happened in the Octagon, but outside of it, as a hit and run accident prompted the UFC to strip him of the belt. Daniel Cormier and Anthony Johnson stepped in to fight for the vacant crown at UFC 187, and it was DC taking the title via submission. In the co-main event, Chris Weidman successfully defended his middleweight title by defeating Vitor Belfort. 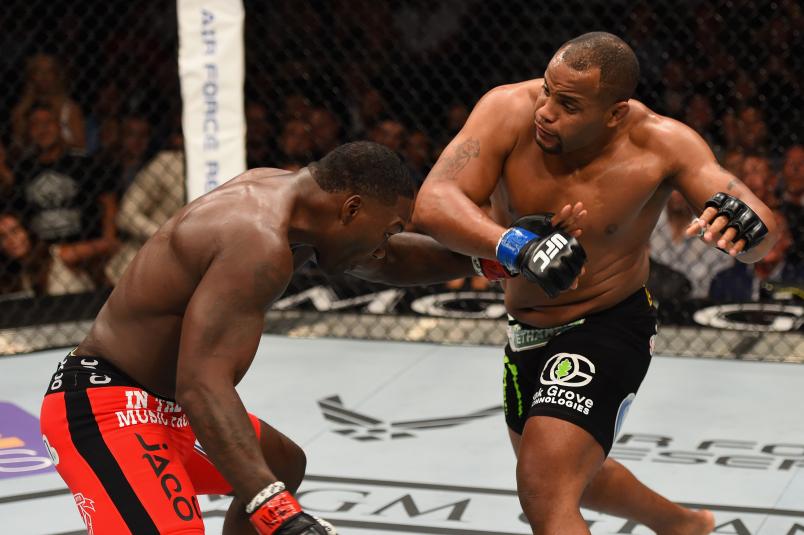 Daniel Cormier punches Anthony Johnson in their UFC light heavyweight championship bout during the UFC 187 event at the MGM Grand Garden Arena on May 23, 2015 in Las Vegas, Nevada. (Photo by Josh Hedges/Zuffa LLC via Getty Images)

In June, another title changed hands when Fabricio Werdum upset Cain Velasquez at UFC 188, capping off a wild first half of the year, but the craziness continued in July when Jose Aldo was forced out of his long-awaited showdown with Conor McGregor due to injury. In stepped Chad Mendes to take on McGregor for the interim featherweight title at UFC 189, but it was “The Notorious” one emerging victorious to earn his first UFC belt.

On the same card, Robbie Lawler successfully defended his welterweight crown with an instant classic against Rory MacDonald. And that weekend, the UFC Hall of Fame’s Class of 2015 was inducted, with BJ Penn, Bas Rutten, Jeff Blatnick, and the fight between Matt Hughes and Frank Trigg receiving their place with the MMA immortals, while the first of six Ultimate Fighters of 2015 was crowned, as future welterweight champion Kamaru Usman led the way, followed by Glaico Franca, Reginaldo Vieira, Erick Montano, Enrique Barzola and Ryan Hall.

The summer of 2015 also marked the historic announcement of the UFC’s partnering with USADA to launch an historic and comprehensive anti-doping program, as well as the introduction of the promotion’s first Athlete Outfitting Policy and UFC Fight Kit in partnership with Reebok.

Back in the Octagon, at UFC 190 in August, Rousey needed just 34 seconds to knock out Bethe Correia, but little did anyone know that would be the bantamweight superstar’s last MMA win, as she suffered a shock knockout loss to Holly Holm three months later in front of a record crowd of 56,214 in Melbourne, Australia.

A lesser shock rattled the middleweight division when Luke Rockhold took Weidman’s middleweight belt at UFC 194 in December, but the big shocks returned within minutes of that bout when McGregor knocked out Aldo in just 13 seconds. Needless to say, McGregor’s win put him on top of the mountain as MMA’s reigning superstar heading into 2016. 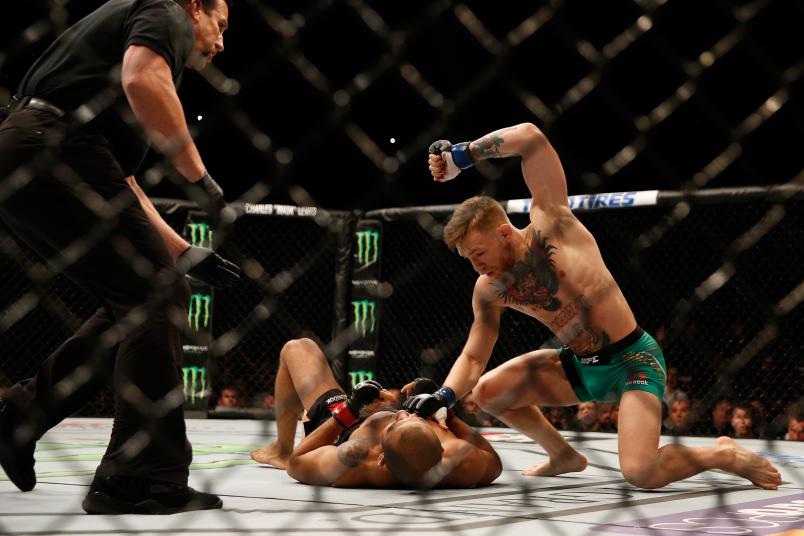 Conor McGregor of Ireland (top) punches Jose Aldo of Brazil in their UFC featherweight championship bout during the UFC 194 event inside MGM Grand Garden Arena on December 12, 2015 in Las Vegas, Nevada. (Photo by Christian Petersen/Zuffa LLC via Getty Ima
FIGHTS OF THE YEAR

KNOCKOUTS OF THE YEAR