UFC returns to mainland China for a third year running with debut of UFC FIGHT NIGHT® SHENZHEN
May. 19, 2019 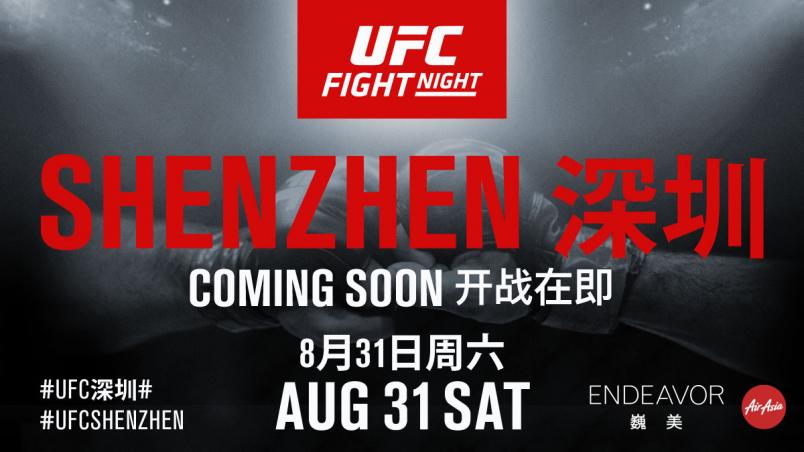 “We continue to add new cities in China to our global calendar of events, and we are excited to see the momentum that is steadily building,” said UFC Senior Vice President Asia-Pacific, Kevin Chang.  “China is the most important growth market for UFC, and our ongoing success is a testament to the loyalty of our passionate fans, the on-going support from our partners, and the work we are doing to fast-track the development of UFC ready athletes in this region.”

Support for UFC in China is surging following its commitment to accelerate the development of MMA talent in the region.  In June, the UFC Performance Institute® Shanghai will open its doors in the Jing’An district, providing elite athletes the opportunity to train in a multi-million dollar state-of-the-art facility utilizing the UFC High Performance System, which has already had tremendous impact with athletes from a wide range of sports, including several Chinese Olympic teams.  UFC has signed China’s best MMA athletes, such as UFC women’s strawweight Zhang Weili, who has proven herself to be one of the best female strawweights in the world.  Now ranked at number 6, Weili has the potential to be the first UFC champion out of China.

“Endeavor China is excited to once again bring UFC, the world’s premier professional MMA organization, to Chinese audiences," said Michael Ma, Endeavor China CEO.  "After the great success of events in Shanghai and Beijing, we are happy to announce that this year’s UFC Fight Night event will take place in Shenzhen.  MMA’s popularity is quickly rising in China, and we look forward to bringing our growing fanbase the best that UFC has to offer.”

UFC FIGHT NIGHT® SHENZHEN  will be the first UFC event in mainland China presented by AirAsia, Asia’s best low-cost airline.  “AirAsia has been part of UFC in China since Bisping vs Gastelum in 2017," said AirAsia Group Head of Branding, Rudy Khaw.  "We are committed to supporting MMA in one of the most important markets for us, and we are proud to be able to present the UFC’s third event in China and its first south of the Yangzi,”

Additional details about UFC FIGHT NIGHT® SHENZHEN , including scheduled fights, ticket sales, and activities for fight week, will be announced at a later date.  For all the latest updates, fans are advised to follow Weibo: @UFC终极格斗冠军赛, Wechat: UFC终极格斗锦标赛(ufcofficial) Youku, QQ, Facebook (UFC Asia), Twitter and Instagram (@ufc), and use our official hashtag: #UFCSHENZHEN

UFC®, is the world’s premier mixed martial arts organization and the largest Pay-Per-View event provider in the world. UFC boasts more than 300 million fans worldwide, including 70 million social media followers across all of its digital platforms, and its programming is broadcast in over 170 countries and territories to one billion TV households worldwide in 40 different languages. UFC produces more than 40 live events annually and consistently sells out some of the world’s most prestigious arenas.  Since 2001, UFC has been proudly headquartered in Las Vegas, with a network of employees around the world.  UFC’s current roster of athletes features more than 570 men and women representing over 55 countries.  UFC FIGHT PASS®, the world’s leading digital subscription service for combat sports, delivers exclusive live events, thousands of fights on-demand and original content to fans around the world. UFC was acquired in 2016 by global sports, entertainment, and fashion leader Endeavor, along with strategic investors Silver Lake Partners and KKR, in what is among the largest transactions in sports history. For more information, visit UFC.com and follow UFC at Facebook.com/UFC, Twitter, Snapchat and Instagram: @UFC.

Endeavor China is a subsidiary of Endeavor (formerly WME | IMG), a global leader in sports, entertainment and fashion operating in more than 30 countries. Formed through an investment group that includes Sequoia Capital China, Tencent, FountainVest Partners and Focus Media, Endeavor China is focused on building upon Endeavor’s longstanding presence in the region and advancing its growth across entertainment and sports.

AirAsia, the world’s leading low-cost carrier, services an extensive network of over 140 destinations across Asia Pacific. Since starting operations in 2001, AirAsia has carried more than 500 million guests and grown its fleet from just two aircraft to over 200. The airline is proud to be a truly Asean (Association of Southeast Asian Nations) airline with established operations based in Malaysia, Indonesia, Thailand and the Philippines as well as India and Japan, servicing a network stretching across Asia, Australia, the Middle East and the US. AirAsia has been named the World’s Best Low-Cost Airline at the annual Skytrax World Airline Awards 10 times in a row from 2009 to 2018. AirAsia was also awarded World's Leading Low-Cost Airline for the sixth consecutive year at the 2018 World Travel Awards, where it also won the World's Leading Low-Cost Airline Cabin Crew award for a second straight year. Follow AirAsia on Facebook (AirAsia), Twitter (@AirAsia), Instagram (@airasia), YouTube (AirAsia), Weibo (@亚航之家) and WeChat (亚洲航空).