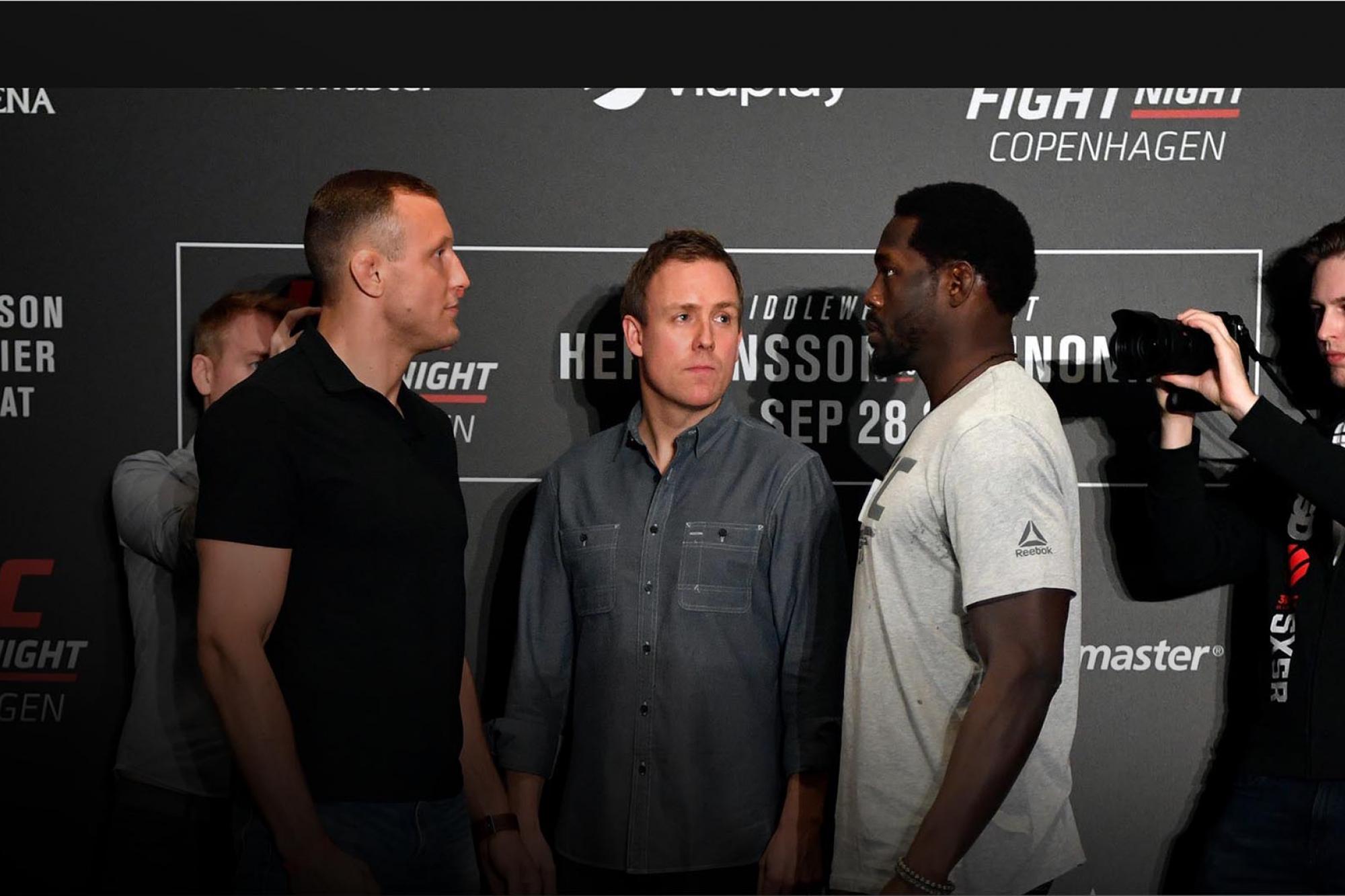 Highly touted Welshman Jack Shore impressed in his UFC debut, submitting Nohelin Hernandez in the first round of the bantamweight opener.

Calm, cool and collected throughout, Shore battled on even terms with Hernandez on the feet, but whenever “Tank” got the fight to the mat, he dominated, nearly finishing the fight in the first before getting the job done in round three with a rear naked choke that forced the Californian to tap out at the 2:51 mark.

In a meeting of lightweight standouts, it was Marc Diakiese emerging victorious over Lando Vannata by way of a shutout three-round unanimous decision.

Diakiese (14-3) went after the lower leg of Vannata (10-4-2) to start, and he quickly bruised his foe’s leg up before scoring a takedown in the second minute. Vannata got up quickly, but soon took an inadvertent low kick that brought a momentary stop to the action with a little over a minute to go. Once the bout resumed, Vannata attempted to take things up a notch, but Diakese remained sharp with his striking, and the dominance of the “Bonecrusher” continued into the second stanza, as he remained a step ahead of the Albuquerque product throughout the middle five minutes, and there was little change to the proceedings in the final frame, locking up a clear-cut 30-27, 30-27 and 30-26 decision for the Doncaster product.

After a first round dominated by Chiasson in the clinch, Lansberg bounced back with a takedown and a long spell of ground control in the second frame that seemingly evened things up on the scorecards. That led to some spirited instructions from Chiasson coach Sayif Saud before the final round, and the New Orleans native responded with a fast start to the third. But a minute in, Lansberg scored a takedown and began firing hard strikes from the top position. With under two minutes left, Chiasson got upright, but Lansberg kept her pinned to the fence until the final horn sounded.

The 145-pounders got off to an interesting start in the first round, with Davis scoring a couple takedowns and getting into the mount position for a spell, but Chikadze reversed that position and scored with several ground strikes, keeping things close.

Chikadze had the time to get into a rhythm on his feet in round two, and he tagged Davis with several hard shots that “Killer B” took with no issue before he was grounded by another Davis takedown with less than a minute left. Chikadze got upright before the horn, though, ending the round on his feet.

Chikadze remained in control for much of the third round, as he kept the fight standing until a Davis takedown in the closing seconds that may have allowed him to leave Copenhagen with a draw.

“The Austrian Wonderboy,” Ismail Naurdiev, delivered a career-best performance against Siyar Bahardurzada, shutting out the veteran striker over three rounds.

This bout was easy to score and break down, as the 23-year-old Naurdiev simply dominated on the feet and the mat in all three rounds. Tossing in timely takedowns along the way, Naurdiev had his most success with his standup game, as a busy and sharp attack kept Bahadurzada from getting close enough to land anything of significance.

Debuting middleweight Makhmud Muradov made the most of his first trip to the Octagon, as he scored a close, but unanimous, decision over Italy’s Alessio Di Chricio.

Looking comfortable in his first Octagon trip, a testament to this being his 29th pro fight, Uzbekistan’s Muradov led the dance in the first round, and while he was busier than his foe, Di Chirico did get his attention with several hard counters before getting taken down late in the round.

Little changed in the second, with Naurdiev controlling the action, but Di Chirico landing just enough shots in return to keep his foe from running away with the fight. And though Di Chirico finally put together his punches in a consistent manner in the final frame, it was not enough to get Muradov out of there or rescue the fight on the scorecards.

John Phillips def Alen Amedovski by KO at :17 in Round 1
Social Post

The third time was the charm for middleweight John Phillips’ Octagon career, as he got into the UFC win column for the first time with a stunning first-round knockout of Alen Amedovski.

After a relatively slow start to the night’s action in earlier bouts, Phillips came out throwing bombs and Amedovski responded in kind, getting the crowd into it immediately. But “The Welsh Wrecking Machine” came out on top of the heated exchange, dropping Amedovski to the canvas. Phillips briefly hesitated, but then came the final blow that brought in referee Neil Hall to stop the fight at the 14-second mark of round one.

The UFC comeback of Copenhagen’s Nicolas Dalby was a triumphant one, as he earned a unanimous decision victory over welterweight veteran Alex Oliveira in his first Octagon bout since September 2016.

After a slow start for Dalby that saw Oliveira get in some shots and score a takedown with a little over a minute left in the opening frame, Dalby scored a takedown of his own at round’s end and then got more aggressive to begin the second, as he landed a hard kick to the head and then got another takedown. On the mat, Dalby drilled Oliveira with some strikes until the Brazilian got back to his feet with 90 seconds remaining. Dalby continued to put his strikes together nicely before a wild exchange saw the fight go back to the mat, where Oliveira landed an illegal up kick before the end of the frame.

Oliveira looked tired heading into the last round, but he got an important takedown in the second minute of the third. With two minutes left, referee Rebin Saber restarted the action, but Oliveira put the fight back on the mat, where he searched for a submission before Dalby got free and into the mount position. And with the crowd roaring, Dalby rained down strikes on “Cowboy,” wrapping up an emotional victory for “Lokomotivo.”

Ovince Saint Preux def Michal Oleksiejczuk by submission due to a Von Flue Choke at 2:46 in Round 3
Social Post

Of the six Von Flue chokes that ended UFC fights, perennial light heavyweight contender Ovince Saint Preux now has four of them, as he bounced back from a rocky start to submit Poland’s Michal Oleksiejczuk in the second round.

Oleksiejczuk went on the attack immediately, landing almost at will with left hands to the body and head. A knockdown followed and it looked like an early night for Oleksiejczuk, but Saint Preux slowly got back into the fight and began landing strikes of his own. By round two, OSP was taking control of the bout with his strikes, and once he took his opponent to the mat, it was time for his ol’ reliable Von Flue choke, and the tap came moments later, with the official time being 2:46 of round two.

Cutelaba ate some bombs from Rountree in the opening minute as he sought a takedown, and while he got the American to the deck briefly, it wasn’t until nearly two minutes passed that the Moldova native was able to ground Rountree. Midway through the round, Rountree got up but was put right back down, and a series of thudding strikes brought referee Marc Goddard in to stop the fight at 2:35 of round one.

Gilbert Burns made it two for two in short-notice welterweight bouts this year, as he won a close, but unanimous, decision over Gunnar Nelson.

The two jiu-jitsu black belts kept it standing for most of the first round, Burns holding a slight edge until a takedown by Nelson with less than a minute to go.

Nelson had some success in the clinch in round two, but it was Burns breaking open a close round with a flying knee, a choke attempt and his work in the scrambles.

Burns was the busier of the two in the clinch as Nelson bulled him to the fence in round three, and an emphatic slam by “Durinho” in the final minute added more points to his tally before the final horn sounded.

Mark O. Madsen def Danilo Belluardo by TKO at 1:12 in Round 1
Social Post

It didn’t take long for three-time Danish Olympian Mark O. Madsen to keep his unbeaten record intact against Italy’s Danilo Belluardo, but the fans at Royal Arena weren’t complaining as the lightweight favorite stopped his foe in the first round of the UFC Copenhagen co-main event.

It only took a little over 30 seconds for Madsen to get the fight to the mat, and a series of elbows followed. With Belluardo not responding or improving position, referee Leon Roberts had no choice but to stop the fight at 1:12 of round one.

It looks like Jared Cannonier is here to stay at middleweight, as he earned his third consecutive knockout win at 185 pounds, finishing fellow contender Jack Hermansson in the second round of the UFC Copenhagen main event at Royal Arena.

Hermansson used a series of leg kicks to set up a fight-opening takedown attempt, but Cannonier defended well. Hermansson had better luck with his second try as he suplexed Cannonier to the mat, but the Arizonan rose quickly. And though Hermansson was the busier of the two for a spell, once Cannonier was warmed up, he began taking over, with his main weapon being kicks to the leg.

In the second, Cannonier lowered the boom, with a right uppercut putting Hermansson on the deck. The Norway product covered up and tried to clear his head, but the ground-and-pound attack from “Tha Killa Gorilla” kept coming, prompting referee Marc Goddard to call a stop to the fight at :27 of round two.