A UFC Contract Is Great, But Miles Johns Wants Wins

After earning a contract on Dana White's Contender Series, bantamweight Miles Johns won't feel like a true UFC fighter until he gets his hand raised.
By Thomas Gerbasi • Aug. 20, 2019

Before he even stepped into the Octagon at the new UFC APEX facility in Las Vegas for a June 25 bout with Richie Santiago, Miles Johns was expected to do big things. Those big things included beating Santiago and earning a UFC contract.

He did both, and it was no surprise that one of the newest members of the UFC’s bantamweight roster lived up to expectations. See, the 25-year-old is a card carrying member of Sayif Saud’s Fortis MMA squad, home to a host of Dana White’s Contender Series graduates. So if you’re coming in from Dallas with four-ounce gloves on your fists these days, you need to deliver.

This is no revelation to Johns, who has long been studying his teammates making the transition from the regional circuit to the big show.

“A hundred percent,” he said. “I’m watching how they’re training, I’m watching how they maneuver, I’m watching their attitude, just trying to take everything in and of course seeing what I think works, what doesn’t work, and it’s awesome. There are so many good role models and they’re grinders. Macy (Chiasson) is one of the hardest workers I’ve ever seen in my entire life and I’ve been playing sports for a long time. And Geoff (Neal), when he gets close to a fight, he’s locked in and you can feel the energy. I’m watching Charles (Byrd), (Ryan) Spann, Kennedy (Nzechukwu), Alonzo (Menifield), everybody. We have so many guys in the UFC, it’s a huge blessing and I’m watching how they act and I’m trying to implement that into my game as well. And also having coach Sayif in the gym, he keeps such a high level. It seems like he’s at the UFC every other weekend now (Laughs), and he leads by example as well.”

Read off those names again and you’ll see the talent coming out of the Texas gym on a regular basis, with the Contender Series playing a big part in launching those fighters into the UFC. And while the unbeaten (9-0) Johns has been looking for his shot for a while, Saud pulled him back until he was ready to make an immediate impact and get that contract.

“I felt like I was ready for a long time,” Johns admits. “But I am happy with how the timing worked out; it’s all working out perfectly thanks to my coach and thanks to God. I’ve done the hard stuff, I’ve had a lot of fights for LFA, I won the belt for LFA, I fought a lot of tough competition, so I felt like I was ready. And there were times when I felt like I was ready probably two years ago, and my coach was like, ‘No, let’s just do this.’ So I’m happy that it didn’t happen then, because right now is the perfect time. I’m 25 and I’m ready to start getting a couple fights, and then hit my prime on the way to the belt.”

Johns looked ready against Santiago in June as he pounded out a dominant three-round decision over his foe, and now he’ll get the chance to break in his UFC contract with a September bout in Vancouver, BC against Cole Smith. It’s not an easy assignment for his debut, but then again, there are no easy fights in the Octagon, especially at 135 pounds.

“I’m looking at it in an excited way,” Johns said. “There are a lot of prospects out there right now, a lot of things going on in the bantamweight division and it’s exciting. If your dreams don’t scare you a little bit, then I don’t think they’re big enough. So I’m not gonna say that some of it isn’t like, ‘Man, we’ve got some beasts to go up against,’ but I just love competing and when the stakes are higher, I definitely feel like I’m one that rises to the level of my competition. I feel like if something dropped out in the top five and they drop me in, then I’m gonna go in there and perform. But I know that it’s gonna take time and I’m ready to climb up the ladder. I’m grateful for all the fighters in there because to be great, you have to have great competition.” 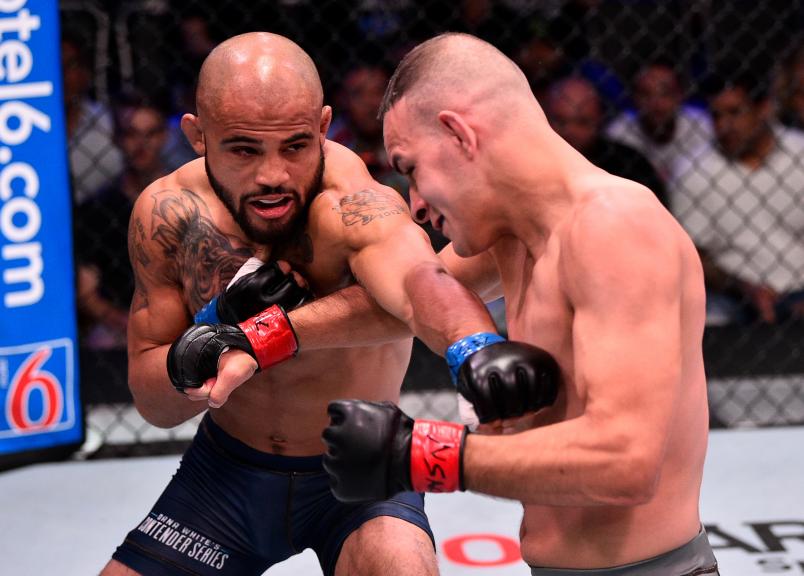 If Johns sounds a little more mature than your average 25-year-old, that would be accurate, and that’s even before you add his degree as a registered nurse and the golden doodle business he owns with his wife into the equation. Oh yeah, and he’s got two sons as well. So is this where that maturity comes from?

Miles Johns is UFC level now. Just don’t tell him that, because he’s got a response borrowed from one of his teammates.

“When Geoff Neal got in (to the UFC), he said you’re not really a true UFC fighter until you get a couple wins under your belt, and that’s how I feel.”

It is cool, though, right?

“I’ve been daydreaming about this moment since I was real young,” Johns said. “I didn’t know it was gonna be in the UFC, but it was going to be something under the lights. And I’m keeping a level head, I know I haven’t done anything and there’s still so many things I want to accomplish, so I’m keeping focused, ten toes to the ground. But yeah, it’s nice.”