London, UK – UFC®, the world’s premier mixed martial arts organization, today announced its return to London on Saturday, July 23, at The O2. UFC returned to the UK for the first time in three years in March for UFC FIGHT NIGHT®: VOLKOV vs. ASPINALL, welcoming a sell-out crowd of over 17,000. Following the success of UFC's return to the UK, the promotion will host its second event in London this year. 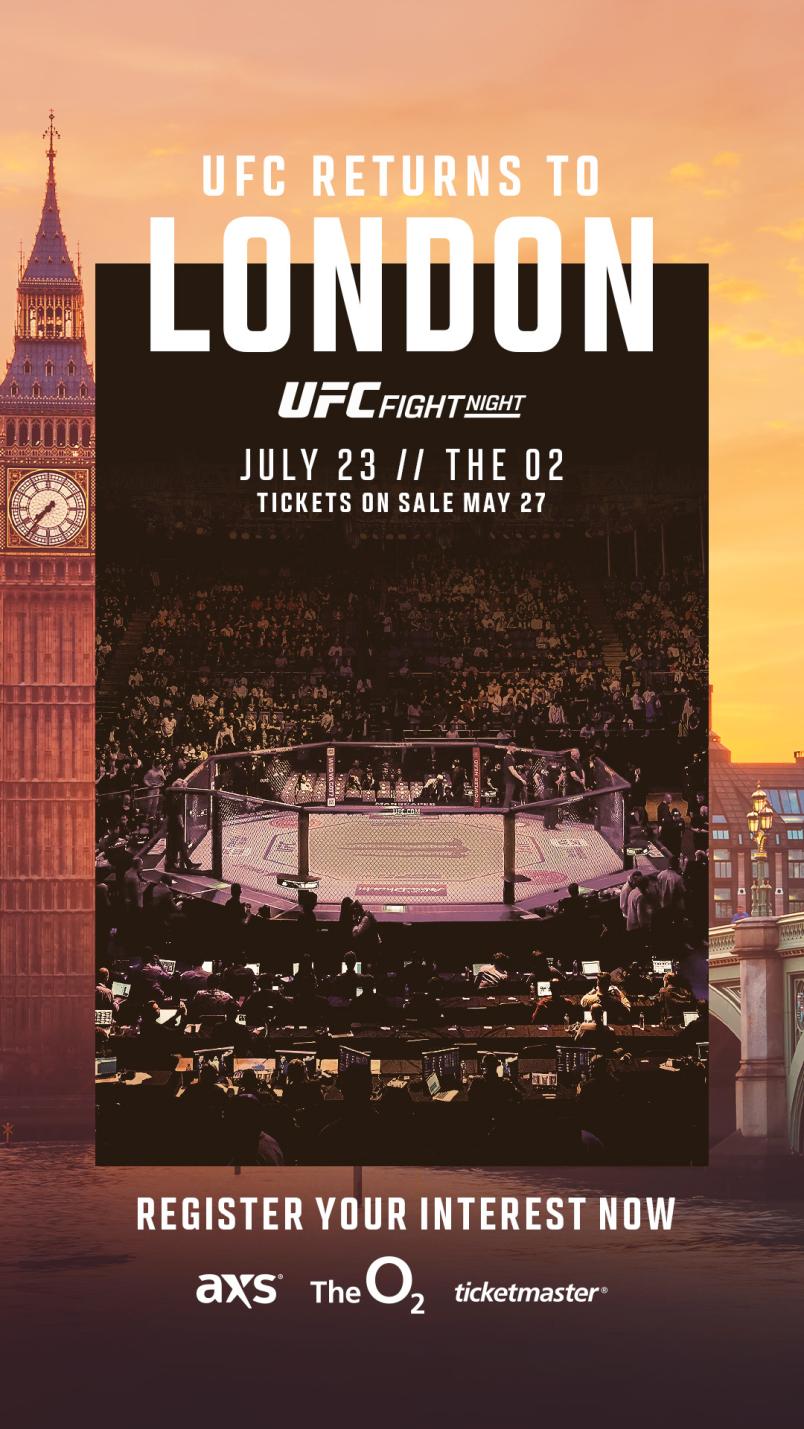 After this year’s sold-out event, sports fans are encouraged to purchase their tickets early to avoid disappointment. Fans can register their interest in the event via UFC.com/London.

Tickets will go on general sale Friday, May 27, via AXS and Ticketmaster. Fight Club and O2 priority members can purchase tickets from Wednesday, May 25. Whilst newsletter subscribers and those who register their interest can gain early access to tickets from Thursday, May 26.

London has always been the home to landmark UFC events, and earlier this year, it played host to one of the most memorable Fight Nights in UFC history. UFC FIGHT NIGHT®: VOLKOV vs. ASPINALL was the highest-grossing Fight Night in UFC history and the highest-grossing single sporting event ever in The O2. Fans were treated to standout performances with nine stoppages, six of which came from local British athletes, that night.

England's UFC heavyweight Tom Aspinall put on a performance of a lifetime. He went head-to-head with Alexander Volkov, defeating him via submission, continuing his unbeaten record in the UFC and earning him his fourth Performance of the Night bonus. The co-main event saw Arnold Allen cement his status in the featherweight division as he defeated New Zealand’s own Dan Hooker via TKO.

Rising star Paddy Pimblett put on a show in front of home fans. He defeated Rodrigo Vargas via submission. While Molly McCann had a knockout of the year contender performance, Muhammad Mokaev triumphed in his UFC debut, and Paul Craig won in emphatic fashion. That night UFC’s UK contingent reached new heights.

UFC President Dana White made his desires on the market clear back in March when he commented: “This is the greatest batch of talent we’ve ever seen in the history of the UK. Tonight re-energised me and reminded me of what it's like to do fights over in the UK. We're coming back here this year.”

VIP tickets will be available via On Location, the UFC’s official VIP experience provider. Enjoy exclusive access with an official ticket package that can feature premium seating, VIP access to weigh-ins, exclusive pre-fight hospitality, UFC Fighter meet and greets and more. For more information, visit UFCVIP.com where package details will be made available.

Fans are encouraged to follow @UFCEurope for all the latest UFC updates.