RONALDO “JACARE” SOUZA VS DEREK BRUNSON
Saturday’s main event is one of the rare rematches where the first bout really has no bearing on what happens in the second one, and “Jacare” Souza and Derek Brunson are in agreement there, because both are vastly different fighters than they were when Souza scored a 41-second knockout win in 2012. Now, both have made their mark in the UFC and are in the title race, and Brunson has developed a deadly striking attack to go with his wrestling game. As for Jacare, he’s continued to evolve his standup game, but it’s his ground game that remains one of the most fearsome weapons in the sport. So let’s make it simple: if it goes to the ground, Souza has the edge, if it stays standing, Brunson is in his world. All that’s left is to see who gets their way in Charlotte.

DENNIS BERMUDEZ VS ANDRE FILI
Dennis Bermudez is 4-4 in his last eight. So is Andre Fili. So why should we be excited about this co-main event? A) Stylistically, this is a can’t miss, with Bermudez’ pressure and Fili’s often frenetic style perfect for each other. B) Both featherweights seem to have figured out why they were have been so erratic in the Octagon. And C) There’s a lot on the line for each fighter, making a winning start to 2018 imperative. Conclusion? I’m in.

JORDAN RINALDI VS GREGOR GILLESPIE
Gregor Gillespie is shaping up to be a serious threat at 155 pounds, living up to all the hype east coasters had built up around him before his UFC debut. Now 3-0 in the Octagon, the New Yorker travels to Jordan Rinaldi’s backyard for this main card bout, but after a stellar college wrestling career, Gillespie is used to hearing boos. Will he be equally ready for an opponent pumped up to be fighting at home? He’s probably seen that too.
MORE FROM FIGHT NIGHT CHARLOTTE: Bermudez looks to start fresh | Road to the Octagon: Bermudez vs Fili | Rinaldi vs Gillespie

DREW DOBER VS FRANK CAMACHO
When the Ovince Saint Preux-Ilir Latifi bout got moved, this was the perfect choice for an upgrade to the main card, and I can guarantee that if someone tunes into FOX and sees Dober and Camacho going at it, they’re going to stick around for the whole show. Not to put any added pressure on Camacho, but if I’m not mistaken, Yoshihiro Akiyama is the only fighter in UFC history to win Fight of the Night honors in his first three Octagon bouts, and Camacho can join him in the record books if he can do it again Saturday. Then again, guys like him don’t need any added incentive – they scrap just to scrap, and Dober is of the same mindset. Like I said, this is the perfect way to kick off the main card.

ERIK KOCH VS BOBBY GREEN
Like Bermudez and Fili, Erik Koch and Bobby Green have been cursed with inconsistency and injuries throughout the years, but hey, “New Year New Me,” so here’s hoping these talented veterans have a healthy year that can see them make their move up the lightweight ladder. In the meantime, they’ve got to fight, and when their offenses are clicking, there’s explosive potential in these two. 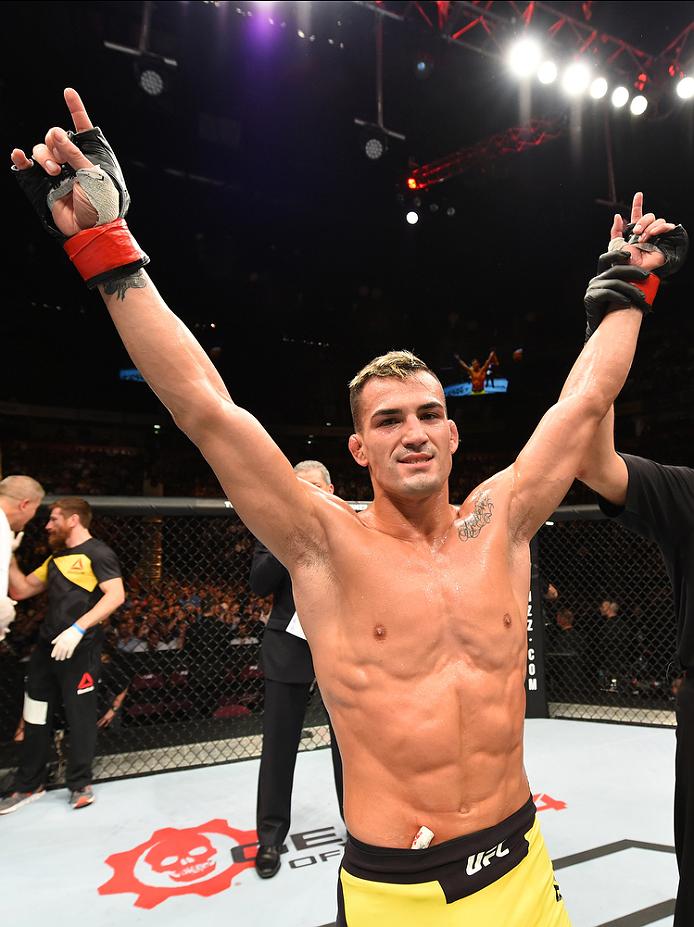 Russell Doane during their bout at UFC 204" align="left" />An under the radar fight this weekend pits Mirsad Bektic against Godofredo Pepey in a featherweight matchup that will let the world know how Bektic has rebounded from his upset loss to Darren Elkins last year. Unbeaten and ahead on the scorecards, Bektic got finished in the final round, shocking the MMA world. He has since joined up with the Tristar team in Montreal, and he’s got a statement to make when he faces Pepey, whose aggressive style could either give Bektic some bad memories or leave him open for the more measured attack of the still highly-regarded prospect.

KATLYN CHOOKAGIAN VS MARA ROMERO BORELLA
As noted in my feature yesterday, Katlyn Chookagian will have beaten three members of the flyweight top 10 if she gets by Mara Romero Borella on Saturday. That’s a pretty impressive feat if she can pull it off and it should propel her into the title race immediately, but there is the business of getting by Borella, and that will be a challenge if the fight gets to the mat, but on the feet, it’s Chookagian’s world, and you can bet that Mark Henry and company will have her ready to make a splash in her UFC debut at 125 pounds.

RANDA MARKOS VS JULIANA LIMA
Interesting clash at 115 pounds between Randa Markos and Juliana Lima and the winner should get some well-deserved time in the spotlight because they’ve both spent their UFC careers fighting killers. Two world title challengers and two world champions have shared the Octagon with Markos and Lima, and that experience can only help them in a fight that both could use after recent losses.

JUSTINE KISH VS JI YEON KIM
The flyweight division has made it a whole new world for “Tweeners” who were too big for strawweight and too small for bantamweight, and that means we’re going to see fighters like Justine Kish and the aforementioned Katlyn Chookagian at their best on fight night. And like Chookagian, who had success at bantamweight, Kish had success at strawweight, so all eyes will be on her to make an immediate impact when she faces Ji Yeon Kim at home in North Carolina.

VINC PICHEL VS JOAQUIM SILVA
I don’t know if anyone outside of Vinc Pichel’s camp thought he was going to return from three years away and score a first-round knockout of Damien Brown last June. But he did, and if he can put an end to Joaquim Silva’s perfect UFC run, then he’s got to be knocking on the door of a top 15 ranking. But that’s no easy feat, because Silva is one of Brazil’s top prospects and a fighter who didn’t get to 3-0 in the Octagon by accident. If he can shake off Pichel’s hammers, Silva has the tools to get the job done everywhere.

NIKO PRICE VS GEORGE SULLIVAN
Niko Price was making a lot of noise as a welterweight prospect before an October loss to Vicente Luque slowed the momentum down, but he’s still one of the most promising up and comers at 170 pounds, and he’ll get a chance to prove it against returning New Jersey vet George Sullivan, a power hitter who is a bit of a mystery heading into Saturday’s bout after two years on the shelf.

AUSTIN ARNETT VS CORY SANDHAGEN
A late add to Saturday’s show, featherweights Austin Arnett and Cory Sandhagen provide a compelling reason to tune in early. UFC fans got an initial look at Arnett in his exciting battle with Brandon Davis on Dana White’s Tuesday Night Contender Series, and as a member of the Sikjitsu squad, it’s a prerequisite that he will bring the heat when the bell rings. Sandhagen comes from a solid crew in Colorado himself, and as a former kickboxing champ with a brown belt in jiu-jitsu, this one may travel all over the Octagon over the course of 15 minutes or less.