Women's MMA has grown dramatically since the first women's UFC fight in 2013. From skillsets to exposure, women's MMA continues to evolve and expand.
By Zac Pacleb • Mar. 7, 2019

Since Ronda Rousey and Liz Carmouche walked to the Octagon at UFC 157 more than six years ago, the UFC continues to see women break new ground in mixed martial arts.

“Watching the progression, the evolution of the sport for women, particularly in the UFC, has been amazing,” said Carmouche, who was the first woman to walk to the UFC Octagon. “It’s been something where it’s just a little seed that was planted, to now it’s the large seed that’s just growing more and more.”

Speaking to several current fighters about the growth of women’s mixed martial arts and the women’s divisions in the UFC, it’s almost impossible to go a few sentences without Ronda Rousey’s name coming up. It’s not without merit, either.

Although Rousey hasn’t held the bantamweight title for more than two years, her impact still rings throughout all aspects of the sport.

“We just needed somebody to knock down that door, and she was able to do that,” UFC correspondent Megan Olivi said. “I feel like Ronda not only opened up doors for women in MMA, but she opened up doors for people like me because I was doing interviews with her, and now she’s headlining pay-per-views, and people are seeing us on camera together. It gave me a lot of opportunities.” 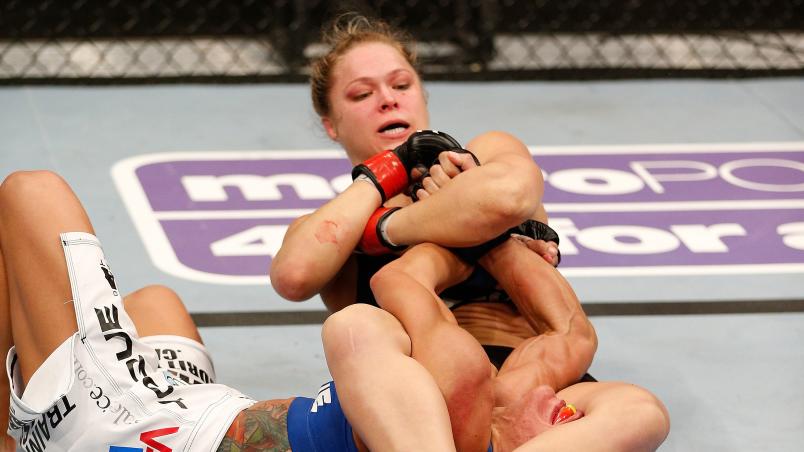 With the expanded audience Rousey helped bring, the UFC saw more stars emerge and carry the mantel for women’s MMA. From dominant champions like Cyborg and former strawweight champ Joanna Jedrzejczyk to up-and-comers like Maycee Barber and Macy Chiasson, the roster and talent level has continued to grow.

“The women are getting insane,” said Barber, who made her debut at Fight Night Denver with a second-round TKO. “They’re getting way more skilled, way better, way faster, way stronger. And it’s really cool to see because there’s a lot of girls out there that don’t think that they can do something that’s a sport, or they can’t do something that makes them manly or whatever it is.”

Between current athletes paying homage to the sport’s pioneers and also expressing their hope to inspire other young women to take up the sport, the talk around being a role model comes up often. In this, mixed martial arts’ reach continues to expand.

“Going back 20 years when I was growing up, I didn’t really have that many female athletes to look upon,” strawweight contender Tecia Torres said. “There were female athletes, but they weren’t in the spotlight. Nowadays, they’re becoming more in the spotlight, and I really enjoy that strong is beautiful. Strong is a thing that people aspire to be because when I was growing up, I really did not enjoy my body because I got made fun of because I was athletic my entire life, but nowadays, little girls can look up to me and be like, ‘I want to be there one day.’”

Unlike almost every other sport, UFC gives a platform for women to compete alongside men in the sense that their events are not separated from each other.

“It’s not like you’ve got WNBA and the NBA (or) men’s tennis and women’s tennis,” UFC correspondent Laura Sanko said. “It’s so intertwined that it really allows the fan base to become a fan of both sides of the sport.”

Although the women’s roster continues to add a diverse array of talent and the notoriety of fighters continues to reach a wider audience, only two of UFC’s events were headlined by women’s fights in 2018. There are those who still hold on to the thought that women in the Octagon is a strange sight.

“You get a lot of comments like, ‘Oh, don’t hurt your pretty face,’” bantamweight Gina Mazany said.  “My nose used to be pointy. I used to never have scars on my face, but I’d much rather have a flat nose and scars on my face than work at a job that I hate. I think that the perspective on women fighting still isn’t there, 100 percent positive, but that’s OK, we have time to prove to people that it’s OK. That’s fine.

“You can believe what you want to believe, and at the end of the day, as long as I believe, women are able to do what they want to do and what they believe in, that’s most important.” 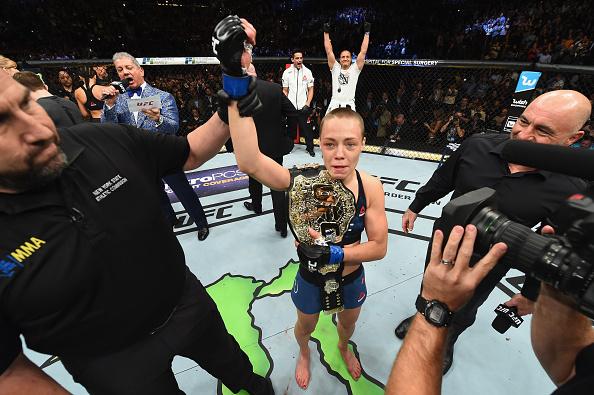 The last six years establishing UFC’s women have brought with it some of the most jaw-dropping moments in the promotion such as Rose Namajunas’ first-round knockout over Jedrzejczyk at UFC 217 and Nunes’ aforementioned ascension to double-champ status. The largest crowd in UFC history (56,214) watched Holly Holm shock the world when she knocked out Rousey at UFC 193.

“More and more, (women) come out and they put on the best shows of the night,” Charmouche said. “They’re making weight all the time, and they’re just showing that women deserve to be here, and they’re the best example of professionalism, so I encourage women to pursue those dreams and that the sport is absolutely growing, and it’s possible for everyone.”