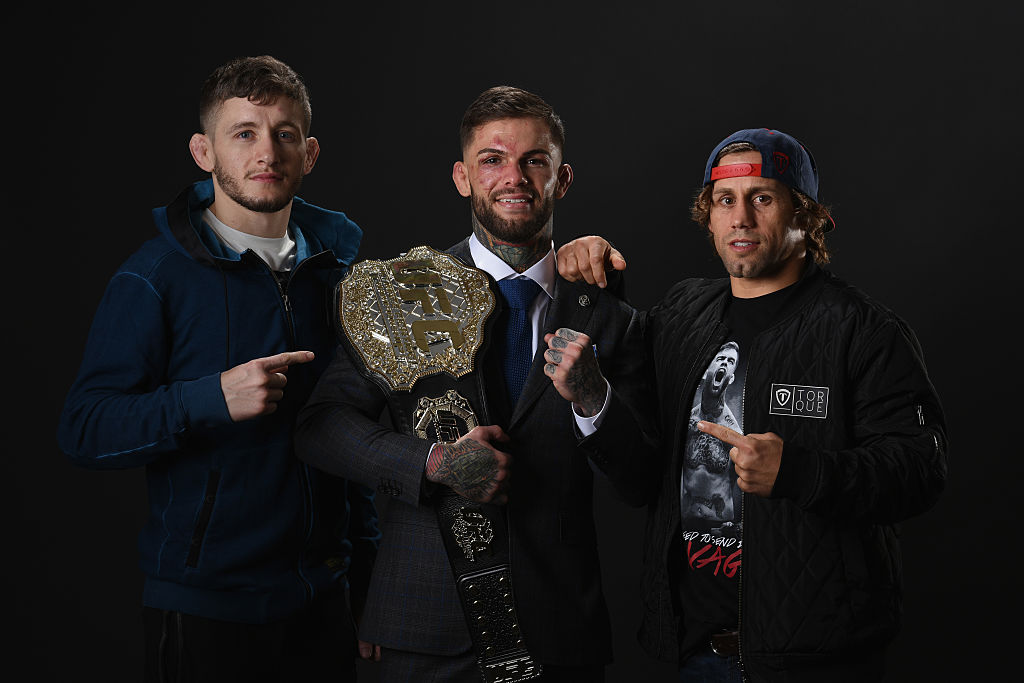 Andre Fili was inconsolable. The featherweight prospect had just lost to fellow rising star Yair Rodriguez in April of last year, and as he sat in an ambulance for a precautionary trip to the hospital, his coach, Danny Castillo, was there, ready and willing to let the fighter vent.

“I can’t believe this happened,” Fili said. “I’ve never been knocked out.”

“Just calm down,” Castillo responded. “It’s MMA. These things happen. You can’t be a carpenter and complain about splinters. These are the things you signed up for.”

“You don’t know what I’m going through,” Fili said.

Fili pondered the last statement, as Castillo reminded him that over the course of nearly 30 pro fights, 22 of them under the Zuffa (UFC / WEC) umbrella, he was on the wrong end of a knockout three times. And each time, “Last Call” dusted himself off and got back to work and his winning ways. Just like Fili would, rebounding from the loss to Rodriguez with an impressive win over Hacran Dias in October.

It’s that kind of knowledge you can’t learn in a book or from watching tape. That doesn’t mean there aren’t good coaches out there that haven’t competed professionally, but to have that experience is invaluable for young fighters finding their way in a sport that doesn’t come with an instruction manual.

So when the trio of Castillo, Justin Buchholz and Chris Holdsworth tell their charges at Team Alpha Male something, they listen. And even when the vultures circled the Ultimate Fitness gym in Sacramento and said that due to the defections and / or retirements of high-profile fighters and coaches like TJ Dillashaw, Joseph Benavidez, Duane Ludwig and Martin Kampmann that the team was done, they kept pushing forward.

On Dec. 30, the team celebrated a world championship when Cody Garbrandt put on the performance of the year in taking Dominick Cruz’ UFC bantamweight title. It was also the “I told you so” of 2016, but Castillo wasn’t gloating to those that doubted his squad.

“I took screenshots of some of the horrible things that people were saying on social media, and I just couldn’t wait for Cody to win that belt and to go back and talk a bunch of trash to those people, but I didn’t do that,” Castillo said. “I chose to take the higher road and I didn’t respond.”

He didn’t need to. Garbrandt’s win spoke for itself, but Castillo does admit that this wasn’t just another fight.

“Dom (Cruz) came up with the term ‘Alpha Fail,’ saying that he owned all my teammates and all this other stuff,” he said. “So it was personal. But hours went into studying him and breaking him down, and our head coach, Justin Buchholz, was able to make those adjustments and find a way to beat him. I’m not saying that Team Alpha Male has the best coaching staff on the planet, but there’s an argument that we are.”

At the very least, they’re the most resilient. After weathering key losses in and out of the Octagon and even seeing their founder, Urijah Faber, retire last month, TAM has soldiered on, with Garbrandt’s win the exclamation point on a recent stretch in which Fili, Josh Emmett and Hector Sandoval have all shown that the best still may be yet to come.

“Together, we have become a great coaching staff and we’re developing athletes day in and day out and Cody Garbrandt is a testament to that,” Castillo said. “So don’t be surprised if you see a few more Alpha Male champions coming out of Sacramento. Everyone on the team believes in our system, everyone on the team is happy and confident with the coaching staff and what we’re running. I don’t want to speak too soon, but I feel like we’ve found the recipe for success.”

And while losing some key members of the squad over the years hurt, it wasn’t for the reason you would assume.

“It was very difficult when they left,” he said. “Not so much that we lost some athletes. It was that we lost brothers. Team Alpha Male is probably the closest team in the world and we’re a close-knit group. We go and beat the crap out of each other and then we all sit at a table and eat at the local restaurant. Every holiday, we get together and celebrate. Every fight, we have a going away party and we celebrate. We’re great friends and the one thing that I felt we lost from the team was that.”

In Las Vegas last week, though, Castillo was happy to meet up with Benavidez to discuss Garbrandt’s victory. It may have been a bittersweet moment, but Castillo makes it very clear just how much his former teammate contributed to the success they’ve all had.

“He (Benavidez) was the second member of Team Alpha Male,” Castillo said. “Urijah started it, Joseph was the first member and I was the second member. We had a talk afterwards and he was congratulating us and saying how happy he was for us. And hearing how happy he was, it was kind of sad for me because he helped build that team. He’s been gone for a year, but at the same time, everything that the team is, he played a big part in that. So it was tough on a personal level. In terms of athletes, we’ll pump out athletes. If they’re hard working and great people and they believe in what we’re showing, they’re going to be successful.”

And perhaps the most important part of the equation for Castillo and company is keeping the team philosophy of Faber alive. “The California Kid” wasn’t putting together a bunch of fighters together. He was building careers and lives for those who were dedicated to the cause. That meant preparing for fights and preparing for life after fighting.

Castillo, a high school pal of Faber, currently has two hot Pilates studios that have been ranked No. 1 in Sacramento for three years, and there are plans for more. Other members, past and present, are finding ways to monetize their celebrity and build businesses for now and later, and that’s always been what Faber wanted for his teammates.

“We plan on being (part of) each other’s lives forever,” Castillo said, and even though Faber is no longer an active fighter, as soon as the holidays ended, he was back in the gym.

“Having him in the room, he’s a living, walking legend,” Castillo said. “Before Urijah, there was no 145-pound division, no 135, no 125. He was a great looking kid, beautiful white teeth (Laughs), great smile, he had a degree, spoke well, and he could fight. That was what the WEC was built on, in my opinion, and that’s why I believe Zuffa bought the WEC. If it wasn’t for him, I wouldn’t be in the position I was and I wouldn’t experience the things I did and traveled the world and made money doing what I love. I’m grateful for him.”

Now it’s the job of Castillo, Buchholz and Holdsworth to keep Faber’s dream alive. So far, so good.