It must be a Pacific Northwest thing. Just like novelist Chuck Palahniuk wrote that the one rule of Fight Club is that you do not talk about Fight Club, another Washington State product, Spokane’s Rick Little, has a rule when it comes to his own “fight club,” the Sik-Jitsu Fighting Systems school.

“You’re not allowed to block a body shot in my gym,” Little said matter-of-factly, adding another “You’re not allowed,” for emphasis. From anyone else, the statement would have come from out of nowhere, but not from Little, the head coach and founder of the team that has produced UFC fighters Julianna Pena, Michael Chiesa, Sam Sicilia, Elizabeth Phillips, Cody McKenzie and former Strikeforce standout Lyle Beerbohm. 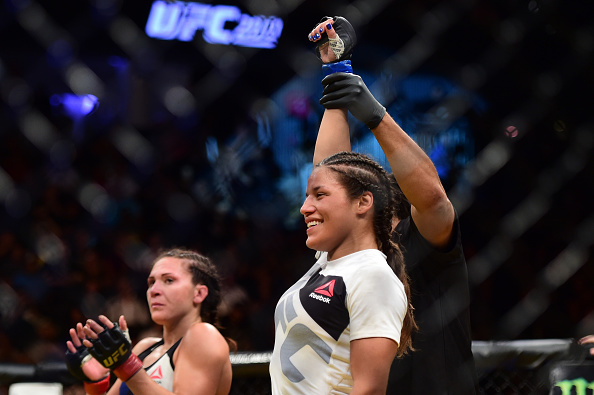 The way he sees it, that one rule encapsulates what he wants his fighters to be. And make no mistake about it, he’s not producing clones in Spokane. Instead, he’s got a diverse cast of characters with different styles, backgrounds and personalities. The only things they share are toughness and gritty attacks that see them intent on not winning sporting events, but leaving fistfights victorious.

But back to the body shot rule …

“I truly believe you’re mentally weak to go down from a belly punch,” Little said. “I truly believe you have no business being in the Octagon and getting punched in the belly and falling down. And those philosophies transfer to my gym. My guys are like, ‘Hey, how do I check a leg kick, Rick?’ And I go, ‘If you have to check a charley horse to the thigh,’ you don’t belong in the cage.’ You walk through the leg kick and you punch him in the fence. You don’t check it, you don’t back off, you run him over. You think if you get in a street fight with some angry guy, you’re gonna leg kick him and that’s gonna stop him? It’s not. I’m not gonna play this check / patty cake game and all this other stuff.”

In short, on fight night, a Sik-Jitsu team member fights. It may not be pretty, but more often than not, Little’s fighters get the W. Next week, Pena will fight in a FOX main event against Valentina Shevchenko that could earn her a bantamweight title shot with a win. Chiesa, who has won three straight over Mitch Clarke, Jim Miller and Beneil Dariush, is raring to go after healing up a back injury. When Little talks about the duo, it’s like he’s a proud papa, but even though he expects both to win world championships, the moment he will remember from each contender is when they won their respective seasons of The Ultimate Fighter.

“Julie and Mike had to go through some hell there, but they had the mind to be able to do it,” he said. “That’s a mind tournament. That’s not just physical; that’s a mental, grueling mind tournament. You’ve got nothing to do in the house except and think and talk to yourself and continually beat people up for three, four weeks straight. I’m very proud of them winning The Ultimate Fighter. As a matter of fact, when they go on to win world championships, I still think that’s a bigger deal.”

Little can talk technique and game plans all day, but everything always seems to come down to the mental game for him. That’s not surprising as the son of a career military man whose work as an elite pilot for the last 38 years has taught him the power of mind over body. He’s carried that to Sik-Jitsu, which he calls, “A supreme mentality training environment.” But it wasn’t always that way. In fact, when he opened up the first location of the gym in his basement, he was the coach he swore he would never be after bad experiences in sports growing up.

“Coaches have a big impact in your life, and when I did sports, I had some awful coaches,” Little said. “Just because someone’s a coach doesn’t mean they’re good. I felt like I could have been a pro athlete in a couple different sports if I had focus and the right coaching that allowed people to be themselves.”

Little eventually found his path thanks to jiu-jitsu, and when he opened up Sik-Jitsu, his second student was Sicilia, a future knockout artist who was anything but that in the early days.

“I was a jiu-jitsu loving dork,” he laughs. “And so everything I did, jiu-jitsu had to be this, you had to fight off your back, and I created him to grapple like me and do jiu-jitsu like me and Royce Gracie, because that’s what I was obsessed with at the time. He (Sicilia) went 7-7 as an amateur. He was a great student, he was trying all the cool stuff I wanted him to try, but he was not winning. I was being exactly the coach that I dreaded when I was coming up and felt like I was getting held down. That’s what I was doing to him.”

After that 7-7 start to Sicilia’s amateur career, Little began to figure it all out.

“I figured out I can’t make these athletes me. I couldn’t make them ‘Rick that should have been MMA fighter guy,’” Little said. “The second I started really analyzing his strengths and weaknesses, Sam went from a 7-7 amateur to a 10-1 pro. Sam was a big beneficiary of me learning to coach and figuring it out.”

Sicilia wasn’t complaining, as that 10-1 pro start earned him a place on TUF 15 and, eventually, a UFC roster spot. Chiesa, Pena and Phillips would join their teammate in the Octagon, and while there have been ups and downs, Little is firmly behind everyone who represents his gym. And heading into the biggest fight of Pena’s career this weekend, he has no illusions about what’s going to happen.

“You’re gonna see Valentina kick Julie right in the stomach because she’s gonna leave her midsection open - and I promise you she will - and the second she throws that kick to the body, she (Shevchenko) is gonna get run over. That’s just the style of the gym.”

It’s an approach that will get people talking in the MMA community, but Little is sticking to his guns. In his world, it’s not cookie cutter MMA training for everybody. He’s doing things his own way, and he’s got backup for everything he says.

“When have you ever seen Nick Diaz block a body shot,” he asks. “You think a man with the mentality of Nick Diaz will ever let someone beat him by hurting him in the belly? No way. That’s the mentality I love and the kind of mentality that succeeds. I think he’s the toughest human around and he’s not good because he’s strong and athletic; he’s good because of his mind. He does not let himself be hurt by these people. It’s like a decision he made, like ‘You’re not gonna hurt me.’ That’s the kind of thing we have at the gym, and I think that allows people’s personalities to come out, because then they get that approach with everything.

And it all happened in Spokane, perhaps the most unlikely MMA hotbed.

“I don’t live in a populous area where I have ex-Seattle Seahawks and ex-national champion wrestlers walking in my gym,” Little said. “These were all teenagers and I brought up every single one of them. The only one that I didn’t bring up as a teenager was Beerbohm, and that’s because he was in prison. I truly believe that the big names (in coaching) could have done what I have with these athletes. Everybody that I’ve named have all lived within five miles of the gym. It’s not like I recruited somebody in the next city. We’re talking about a complete local gym. That’s the common denominator.”