It has been a week of firsts in New York as the UFC prepares for its debut on ESPN+ this Saturday, and not least among them is the first open workouts under the new five-year partnership.

Historic Gleason’s Gym, the hallowed institution central in the stories of boxing greats like Jake LaMotta, Phil Terranova, and Gerry Cooney among countless others, was the fitting site of the next chapter in the company’s history.

“This is the Brooklyn boxing gym,” explained Gleason Gym czar Doug Vannoni. “You talk about street cred, this would be the gym. And the UFC showing up here makes all the sense in the world. In the bigger world, it’s always been made out that there’s some competition between boxing and MMA. But you get boxers and MMA fighters together, they just watch each other. There’s a symbiotic relationship. They have such mutual respect.”

Vannoni’s comments had visual evidence, as both boxers and martial artists paused their training, along with a packed room of local fans, to watch the stars of Saturday’s Barclays Center event showcase their wares. 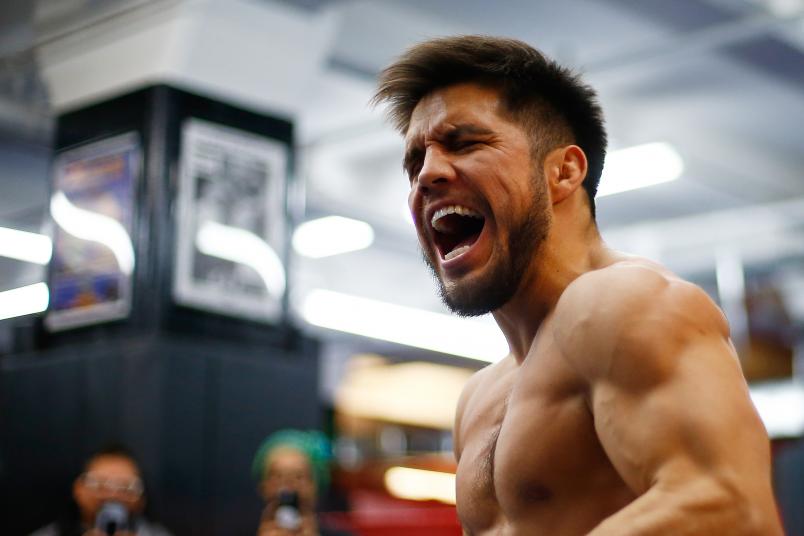 Fresh off claiming the flyweight title from Demetrious Johnson at UFC 227, Henry Cejudo kicked off the proceedings. Much had been made already this fight week of how yoked Cejudo looked, and this outing bore witness to his visibly improved strength. In a nod to this narrative, Cejudo playfully flexed for the gaggle of cameras huddled around the traditional boxing ring.

Beyond conditioning, however, Cejudo also radiated a supreme focus on the task at hand, determined not only to defend his newly minted belt, but also keeping his opponent from making history as the newest multi-division champ-champ.

“I’ve gone through adversity before. Whether I was 31st at the Olympics, winning gold, youngest in history at that time. Whether it’s beating Demetrious Johnson as a 5-1 underdog…to surviving the California fires, I’m on it, man! If there’s anybody you guys should never count out, let it be known, he’s right here: The Messenger.”

Newcomer Alex Hernandex marked a little milestone of his own, making his first appearance at a UFC open workout event. It’s not unwarranted, of course. Hernandez was objectively one of 2018’s most exciting newcomers, and he’ll look to capitalize on his quick ascension with his biggest fight to date against Donald Cerrone; a match some have referred to as a classic passing-of-the-torch.

“With all due respect to [Cerrone], it’s going to be a violent handoff,” Hernandez predicted. “I’m going to run through him and enter the new age.”

Speaking of Cerrone, when we last saw him in Denver, he was rejoicing in one of the more idyllic moments in recent MMA history, hoisting his infant son above his head as he celebrated capturing not only the most wins in UFC history, but also the most finishes. It was also the last time we saw Cowboy at welterweight, and he debuted his new lightweight frame for onlookers in Brooklyn.

Similar to his open workout stint in Denver, Cerrone opted to mingle with fans and take photos in his allotted workout time, content to conserve his energy for the grueling weight cut that fighting at lightweight demands. To watch the hordes delighted to speak with him, nobody was disappointed.

The opening bars of “Can't Stop” by Red Hot Chili Peppers signaled it was TJ Time; the bantamweight champion DIllashaw has his sights set on becoming just the fourth double champ in UFC history, but the first to accomplish the feat by moving down a weight class.

MORE UFC Brooklyn: TJ Wants To Be The Goat | More Than Records For Cerrone

Much had been made about the champ’s extra weight cut, and the possible negative consequence it might have on his speed and power. Without hyperbole, Dillashaw laid those narratives to rest with perhaps his most intense open workout ever. Hitting pads with coach Duane Ludwig, Dillashaw had the longest performance, seemingly unaware of the time, awash in intensity and focus.

“I feel good. Energy levels are great,” Dillashaw confirmed. “I’m waking up within striking distance. I could have made weight today…I feel good. I feel really good.”

Be sure to tune in to how it all plays out Saturday at Fight Night Brooklyn, only on ESPN+