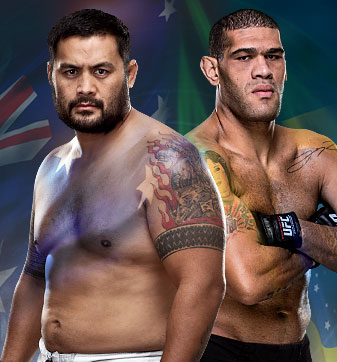 The entire main card for this week’s UFC Fight Night card in Australia is packed with top ten level fighters and former champions, as well as a number of regional fighters hoping to make their home area fans proud with their performances.

Ryan Bader will return to Australia, where he picked up one of his biggest career victories, when he takes on grappler Anthony Perosh, while two knockout artists in the heavyweight division throw down as Pat Barry meets Soa “The Hulk” Palelei.

With a stacked main card coming your way from Australia, the fantasy preview today will examine some of the best bouts and which ones could make the difference when the total points are tallied at the end of the night.

As former training partners at American Top Team, Antonio Silva and Mark Hunt know each other very well, so it was a tough fight for both men to take when the UFC came calling with the offer.  But with both returning off tough knockout losses, this fight will serve as a chance at redemption for the winner to get back in a deep contender's pool in the heavyweight division.

Antonio Silva is a finisher who rarely likes to see the judges get involved in his fights.  It's been over three years since he's gone to a decision, and with an 88.9 percent finishing rate, it's safe to say he won't look to score points against Hunt - he's looking to finish him.  Silva is a huge heavyweight and he knows how to use his power to muscle smaller opponents around the cage.  He's landed 50.9 percent of his significant strikes either in the clinch or on the ground, which is the fifth highest number in the UFC heavyweight division.  If he gets his hands on an opponent and can control where he puts them in the fight, it's a very good sign for Silva.

On the other side of the cage, Hunt is just as dangerous to end the fight, but he's only likely to do it one way - by putting his fist through an opponent's head and watching them crumble to the mat like a building going through a demolition.  Hunt is a headhunter who targets 83.9 percent of his strikes right at his opponent's noggin, and he's had three knockouts or TKOs since coming to the UFC, including his devastating performance over Stefan Struve earlier this year. Mix that in with the best takedown defense in the division and Hunt is going to be a tough customer for any heavyweight to face.

Hunt doesn't back down from an opponent, and while that came back to haunt him against a faster, more accurate striker like Junior dos Santos in his last fight, speed won't be a factor against the lumbering Silva, who is more about power than quickness.  Silva has also fallen victim to the knockout, where he's been finished by strikes in each of his last three losses.  This could be No. 4 given Hunt's one-punch power combined with a rock hard head, and while the odds have him as an underdog, he could be a great pick come fight night.

It's hard to imagine a world where legendary light heavyweight Mauricio 'Shogun' Rua is entering a fight off a two-fight skid, much less coming in as an underdog against an unranked opponent, but that's exactly where the Brazilian finds himself walking into UFC Fight Night in Australia.  Despite those losses, however, don't expect Rua to just roll over because he's had a couple setbacks recently.

Rua is still one of the most venomous light heavyweights in the UFC, and he'll look to showcase that when he faces James Te Huna in Australia.  Rua has 14 knockouts or TKOs in his career, which is the highest ever in the light heavyweight division, and with a 90.5 percent finishing rate, he likes to put opponents away in a devastating manner.  Rua also happens to be the fourth most accurate striker in the division currently, and when he unleashes his punches and kicks, mayhem is guaranteed to happen.

Te Huna will have the support of the hometown crowd behind him as he hails from Australia, and he is no pushover inside the Octagon either.  With the third highest striking accuracy in the division, mixed with the fourth highest takedown rate, Te Huna is a well rounded fighter capable of winning on the feet or on the ground.

Rua has to know that his back is against the wall after his last couple performances, so if he wants a chance to even climb back into the top ten again he has to beat Te Huna and do it convincingly.  If he comes out aggressive like he has in so many past fights, Rua can overwhelm Te Huna earlier and rack up his 15th KO finish, increasing his already record breaking number.

In a true clash of styles, Ryan Bader will look to bounce back from a heartbreaking loss in his last fight, where he was possibly one punch away from defeating Glover Teixeira, when he faces submission specialist turned knockout artist Anthony Perosh.  Bader is known best as a wrestler with 20 career takedowns in the UFC and the fifth highest takedown rate among light heavyweights, but that doesn't account for the power he packs in his punches.

Bader carries dynamite in his hands and he's landed six knockdowns during his UFC career with three knockout victories to his credit.  Many times he uses his wrestling as an offensive maneuver to set up his punches by getting his opponents thinking about the takedown before he uncorks one of his sledgehammer strikes.

Anthony Perosh showed in his last fight that he can land the knockout blow as well, because he put away Vinny Magalhaes in just 14 seconds, which is the third fastest knockout in light heavyweight history.  Despite that finish, Perosh is most accustomed to taking his opponents to the ground and looking for the submission.  He's got the highest submission attempt rate in light heavyweight history and the second highest takedown average as well.  Perosh's best chance to win is on the ground, and the only problem is Bader knows it.

Bader has been submitted twice in his career, both times by guillotine choke, so he has to be wary of Perosh's jiu-jitsu prowess, but if he avoids that, this should be his fight to win.  Bader should be able to avoid Perosh's long arms with his takedowns given his All-American wrestling status, and if he can land one of the bricks attached to his arms on the Australian's head, it's all over.  Look for Bader to land the knockout blow sometime in the first two rounds.

Don't blink when Pat Barry and Soa Palelei step into the Octagon in Australia at UFC Fight Night.  Combined, the two fighters have an incredible 22 career knockouts on their respective resumes.  Add to that the fact that between the two of them and their 36 combined fights, only Barry has ever seen a decision in his career and that's one single time out of 14 career bouts.  In other words, somebody is getting knocked out in this fight.

The real question heading into this fight is which Pat Barry will show up against Palelei?  When he's on his game, Barry is one of the most formidable strikers in the heavyweight division. His leg kicks are crippling and his power is daunting, but there have been more than a few nights in his UFC career where he's failed to show up with that kind of consistency.  He's been the victim of the knockout in three of his UFC losses, and the one that stands out the most going into this fight is his bout against Lavar Johnson.  It's no secret that at 5'11", Barry isn't the tallest heavyweight in the world, but he really struggled getting away from the power and size against a fighter like Johnson, who is a monstrous heavyweight.

Palelei has many of the same attributes.  He's 6'4" tall and 265 pounds of brute strength and muscle.  The Australian loves to overwhelm opponents early and never give them a second to breathe, which is why he has 14 career finishes in the first round.  He was sluggish and slow in his last bout, which he attributed to a pre-fight injury, but typically Palelei is a fast starter who likes to finish things as early as possible.

Still, the X-factor on Barry is enough to believe he can pull out another spectacular finish this time around.  Barry has alternated wins and losses over his last four fights, which means he should be due for a victory when he fights in Australia.  If he can employ the leg kick to chop the giant down, then look for Barry to unload one of his signature head kicks to send Palelei crashing to the mat for the knockout finish.  As an added bonus, if this fight makes it out of the first round, just about everybody should be shocked.