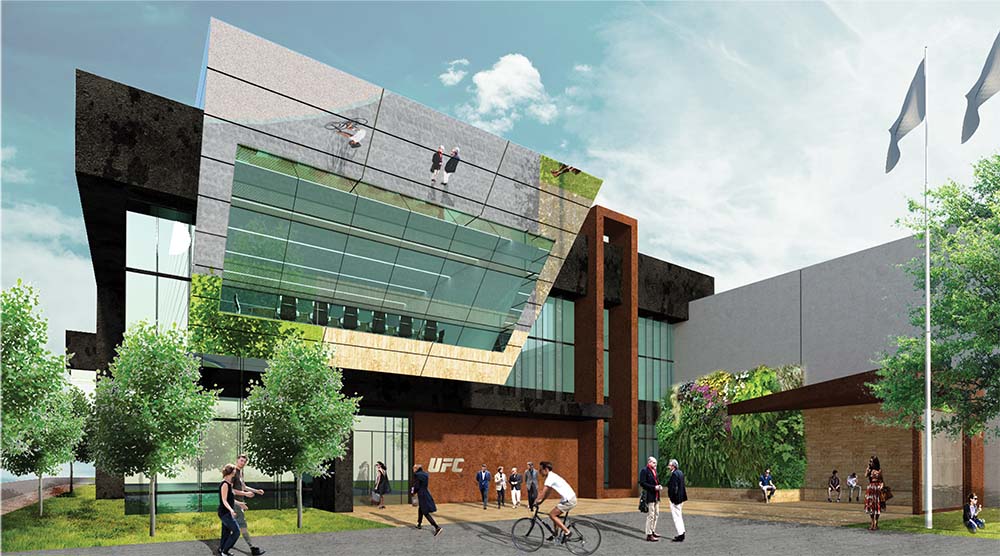 UFC Chairman and CEO Lorenzo Fertitta was always optimistic that the mixed martial arts brand he bought with his brother Frank Fertitta III and friend Dana White in 2001 was going to change the sporting landscape, but nearly 15 years ago, breaking ground on a 184,000 square foot campus for his company wasn’t on the radar.

“When we first took over, we had more of a closet than an office,” Fertitta said. “It was located in my family’s office building where we handled all of our investments, and it was literally a closet, with the three or four people that started with us when we bought the company.”

Those were humble beginnings, but Tuesday in Las Vegas, the aforementioned ground breaking ceremony took place, kicking off a project that will not only see office facilities built for over 360 UFC employees, but the construction of a UFC Athlete Health and Performance Center that will revolutionize how the fighters of the Octagon train, rehabilitate injuries and gain knowledge about their bodies and the latest sports science.

“The campus itself is an investment in the future of the business,” Garry Cook, the UFC’s Chief Global Brand Officer, said. “It’s clearly a commitment to its employees and we all know that great organizations are built on people, so it’s a great place for our people. In addition to that, Las Vegas has become our home, and we feel that a continued investment in athletes is of paramount importance. The first thing we need to do is to make sure that we can provide the very best knowledge of what’s happening in sports science research, to enable our athletes to rehabilitate, to prepare, and prevent injuries. There is so much happening in the space of biomechanics and biometrics, and the sophistication that exists today in sports is something that we think we can take a leadership position on because our sport is very fragmented, considering the number of gyms that are in existence. The gyms do a great job, the athletes do a great job, but maybe we can take some lessons from the sports science research around the world and this facility will be the home of that knowledge.”

In the design and planning stages with Las Vegas-based KGA Architecture, the campus will take approximately 15 months to build, with construction to begin in January of 2016. For the company, which has grown exponentially since Zuffa bought the brand in 2001, the decision to create the campus was a necessary one for simple logistical reasons.

“As we’ve grown and have had success, obviously we’ve hired a lot of people,” Fertitta said. “I don’t think many people realize what it takes to pull off the 41 events that we do every year, and the magnitude of what it takes to run this business. And it just got to the point where we were spread out in various places around Las Vegas, and every great company needs the ability to at least have an area that will foster communication and teamwork and creativity, and I think that’s what this new campus will do for our team members.”

Housing not just offices, but state of the art multimedia space to facilitate the creation of internal content and keep the brand’s world-class production team rolling, Fertitta, a Las Vegas native, is also well aware of how important it was to cement the UFC’s roots in his hometown.

“This means a lot for the city of Las Vegas,” he said. “One, we’re a homegrown company. Two, we provide a sense of diversification for the economy here in Las Vegas. There are a lot of great companies that are based here, but the vast majority of them are oriented towards the gaming industry. And we have really provided an opportunity to build an employee base from a high-tech perspective and a media perspective, and I would have to say that we’re probably one of the only, and certainly the largest, media company that’s based in the city.” 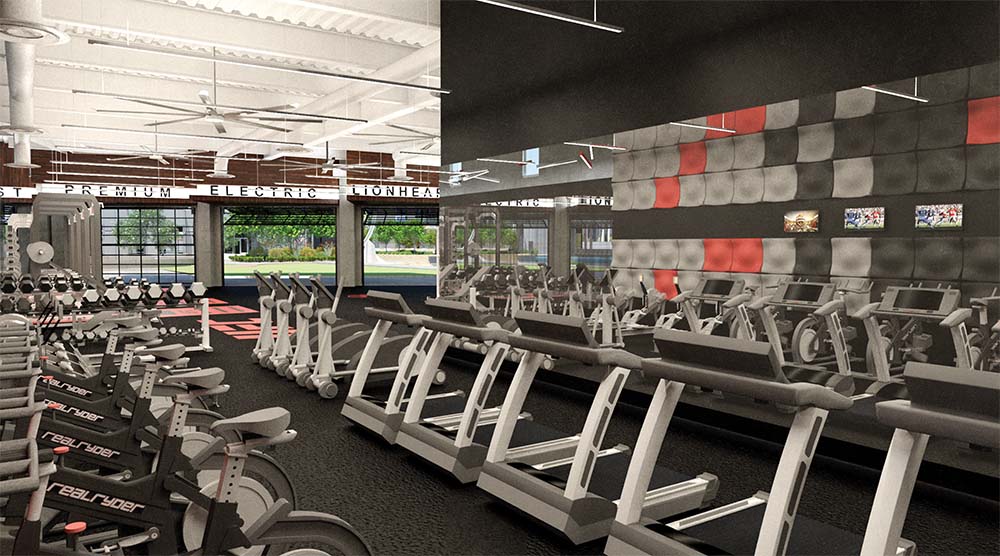 Yet the real game-changer in the UFC Corporate Campus will be the UFC Athlete Health and Performance Center. The facility, the use of which is offered free of charge to UFC athletes, measures over 30,000 square feet over two floors and will contain an Octagon, a boxing ring, mat space, an indoor sprint track, Olympic lifting platforms and a media center. There are also consultation and treatment rooms, a physiotherapy and rehabilitation gym, as well as performance technology and sports science areas. It’s impressive on paper, and Cook believes that once in operation, it will change the sport for the better.

“As an organization, we have changed the landscape of sport in the last 15 years, and nobody would have guessed that was going to come,” he said. “And when you’re a leader, you have to take your sport and you have to take your business to a new place. The benefits that will come from this will be that the athletes will be better informed, they will be better educated, and there will be more awareness of how to train, when to train, what equipment you should use to train, and how the human body is now being measured across all sports. And we need to take a leadership position and innovate in our industry because we are the leaders of our business in MMA, we’re also leaders on the sports landscape, we’ve changed that landscape, and we can take our athletes to even greater heights by investing in athlete capability. So the reason why we’re doing this is because our athletes will become bigger, fitter, stronger, they will have a better understanding of what helps them prepare, a better understanding of rehabilitation and the process of training. We’re not looking to replace what the gyms do; we’re only looking to offer them the capability to enhance what it is that they do.”

In many ways, it’s similar to what the UFC has done over the last decade and a half in getting the sport sanctioned and regulated around the United States and around the world. It’s about looking ahead and providing a safe and level playing field for the athletes while also entertaining the fans by delivering a top-notch product.

“We’ve always been on the cutting edge of investing in the future,” Fertitta said. “We talk about that all the time, whether it was investing in these international markets by opening offices and putting in infrastructure or hiring high-end team members to be able to execute our vision, and this is another perfect example of that. We’re investing in the safety of our fighters with the anti-doping program that we put in place with USADA, and this is just an extension of that. It’s really about the athletes’ overall health, and what we found over the years is that, unfortunately, mixed martial arts training, in our opinion, just hasn’t evolved as training has in other professional sports. We need to make sure that we’re teaching, and that all of our athletes have the ability to see new training techniques firsthand so that they can not only perform better, but hopefully help prevent injuries and really have a facility no different than any other major professional sport has. It’s a place where they can come and either train or rehabilitate themselves and it’s just another example of us investing in our athletes and investing in the future of our sport.”

In other words, while the UFC is still the gold standard when it comes to mixed martial arts fight promotion, for those 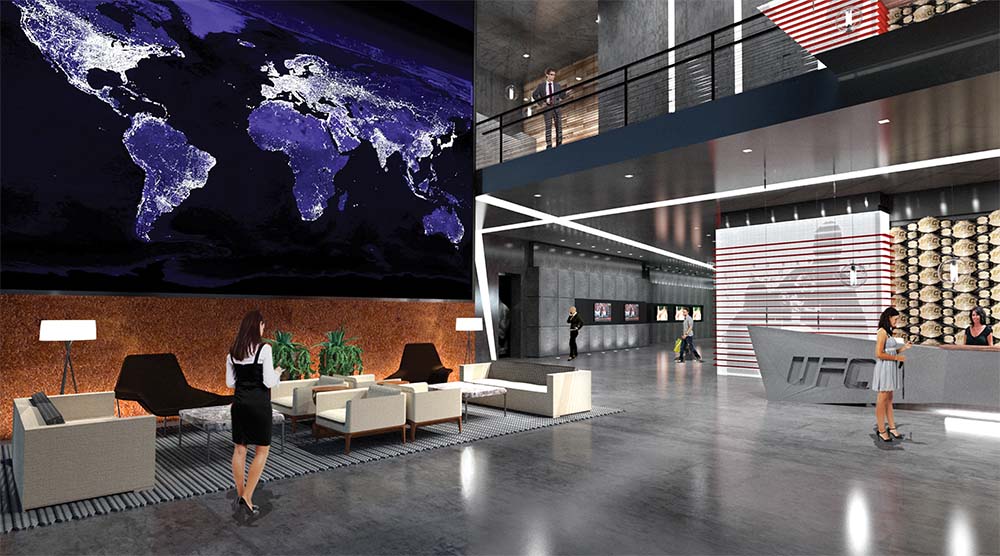 steering the ship, it’s more than just putting on a bunch of fights on Saturday night.

“I think we’re clearly at an evolutionary step change for our business,” Cook said. “We are great fight promoters, and we still maintain that’s our core competency. We became great at creating media content and attracted a much broader audience then we ever anticipated around the globe. The next stage for us is how do we invest and make sure that our business is long-term, it’s sustainable, it benefits everybody, and in doing that, we become a better company and a much greater brand on a sports landscape that is controlled and managed by people like the NFL, the MLB, the NBA, the Premier League, World Cup? We want to be on that playing field. This is another step towards that. Because if you look across all of the other sports, we continue to look for advancement and innovation. Our UFC Athlete Health and Performance Center will have a connection to the Cleveland Clinic. There’s nothing more topical today than concussions. So when you see the company reacting and behaving because it wants to take a leadership position on the global sports landscape, then it makes you feel very good that we’re committed. And what we’re not doing is waiting until next Saturday just to put another event on. We’re investing in those three letters – UFC. They’re powerful, they’re meaningful, they’re delivering a great fan experience, and we want to continue that.”

Fertitta and company have come a long way from that first office / closet. And no, the Chairman and CEO doesn’t pass by those former digs for old time’s sake.

“I think we’ve torn that closet down and turned it into something else at this point,” he laughs. “But it actually says a lot, not just the vision that we had when we built the company, but everything that’s been achieved by our team members. When me, my brother and Dana bought the company in 2001, we had a vision and we wanted to make an impact in combat sports and kind of reshape combat sports, and we have accomplished a lot over the last 15 years. But the fact is that we don’t really have a whole lot of time to rest, put things in perspective and pat ourselves on the back. But I do think this will be another great example for people to actually see what it takes and the amount of resources it takes to actually pull off what we pull off.”

Graphics above are artist renderings.