UFC Brasilia: Fighters On The Rise

Here’s a closer look at three athletes set to compete this weekend at UFC Brasilia
By E. Spencer Kyte, on Twitter @SpencerKyte • Mar. 9, 2020

For the first time since September 2016, the Octagon returns to Ginásio Nilson Nelson in Brasilia, Brazil as the UFC kicks off its 2020 South American schedule with an outstanding card headlined by a crucial lightweight matchup between Kevin Lee and Charles Oliveira.

While last weekend’s UFC 248 pay-per-view in Las Vegas brought the championship glitz, Saturday’s event is one of those cards featuring an intoxicating combination of bouts carrying legitimate divisional significance, a handful of consistently entertaining competitors, and several emerging talents that folks should definitely be keeping an eye on going forward.

And Johnny Walker, who faces Nikita Krylov in a light heavyweight contest that basically touches on all three of those elements.

Here’s a closer look at three athletes set to compete this weekend who are already gathering momentum and have the potential to make some major waves this year.

This is the UFC Brasilia edition of On the Rise. 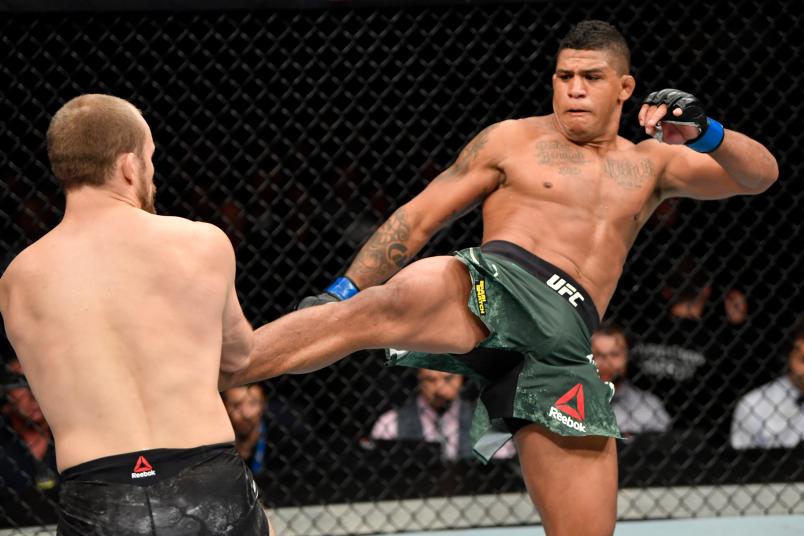 A decorated grappler who was always ticketed to be a contender, but didn’t quite get there initially, Burns has used the last 15 months to transform himself into one of the most interesting names in the welterweight division.

During that time, the 33-year-old Brazilian has gone 4-0, collecting a pair of wins at lightweight before becoming a “super sub” in the 170-pound ranks, stepping in on short notice in back-to-back victories over Aleksei Kunchenko and Gunnar Nelson. His current run of success — and the continued ascent of the last man to beat him, Dan Hooker — has reframed how people view Burns’ UFC career to date and illuminates the fact that the multiple-time Brazilian jiu-jitsu world champion has been on the cusp of contention for several years and finally seems to be putting it all together.

Relocating to welterweight has paid tremendous dividends for Burns, who never missed weight during his lightweight days, but always faced a challenging cut to make the 155-pound limit. He’s quick and strong, with an outstanding top control game and enough pop in his hands to force opponents from selling out to deny takedowns and clinch attempts.

This weekend will be a major test for Burns, though, as he steps into the Octagon against two-time title challenger and resurgent contender Demian Maia, who entered 2019 on a three-fight losing streak and heads into his first fight of 2020 having earned three straight victories. As a former middleweight, Maia has the size and strength to potentially out-muscle Burns, and his grappling ability is second-to-none in the UFC.

Handing Kunchenko his first professional loss on short notice was a breakthrough moment that didn’t garner enough attention, and venturing to Copenhagen and out-working the highly regarded Nelson was another tremendous showing. But if Burns goes to Brasilia, halts Maia’s late-career comeback, and adds a fifth straight victory to his record, people will have no choice but to recognize the South Florida-based upstart as a legitimate Top 10 welterweight and a bona fide threat in the 170-pound weight class.

Ribas’ arrival in the UFC has proven to be worth the wait and this weekend, the surging Brazilian has the opportunity to establish herself as more than just one of the top emerging talents in the strawweight division.

Signed by the UFC in 2017 and expected to debut that July, Ribas was instead sidelined for nearly two full years following an anti-doping violation of which she was later cleared of any wrongdoing.

She finally made her first foray into the Octagon last summer and the results have been nothing short of exceptional. After steamrolling Emily Whitmire in her debut, the 26-year-old outworked highly touted prospect Mackenzie Dern in her sophomore appearance in the UFC cage, handing the decorated Brazilian jiu-jitsu transfer the first loss of her professional career.

Initially slated to face Paige VanZant on Saturday night in Brasilia, Ribas will instead share the cage with one of the division’s more experienced and established talents in Randa Markos, who stepped in when VanZant was scratched due to injury and Ribas asked to remain on the card.

Though she’s dropped out of the Top 15, the Canadian veteran is tied with fellow TUF 20 alum Angela Hill for the most appearances in strawweight history with 13 and has shared the cage with a laundry list of the top talents to pass through the division, amassing a perfectly symmetrical 6-6-1 record to date.

Having graduated from competing against fellow emerging talents with her first two successful appearances in the UFC cage, a victory over Markos this weekend is exactly the type of win Ribas needs to crack the Top 15 and start making her way towards the top of the division. She’s shown flashes of elite potential so far and Saturday’s contest should provide a good gauge for determining where her ceiling rests and how close she is to being a contender in the extremely competitive 115-pound weight class.

While the first two entrants on this list are already well established and have some serious momentum, the third member of Saturday’s triumvirate of emerging talents to track is stepping into the UFC Octagon for just the second time.

Malecki cut her teeth in combat sports competing in Muay Thai before transitioning to mixed martial arts, where she parlayed intriguing potential into a place on Season 28 of The Ultimate Fighter. Although she lost her lone appearance on the show, the telegenic 28-year-old showed promise and eventually landed in the Octagon at home in Sweden, collecting a second-round submission win over Duda Santana last summer in Stockholm.

Malecki built a friendship with eventual winner Macy Chiasson during her time on TUF and spent six weeks crashing on her couch, training with her at Fortis MMA ahead of her promotional debut, and has continued to train there since. Although the Dallas-based outfit has had an up-and-down start to the year, the Sayif Saud-led team is still regarded as one of the top gyms in the sport and has a proven track record of developing talent, with Malecki positioned to potentially be the next member of the crew to make waves.

After rallying to finish Santana last June, her sophomore appearance this weekend represents a significant step up in competition, as Malecki will share the cage with 24-year-old Veronica Macedo, who carries a 6-3-1 record into their showdown in Brasilia. Though she too is coming off her first UFC win, Macedo has shared the cage with a tough slate of opposition since debuting in the Octagon in 2016, and she looked impressive in her victory over Polyana Viana last August.

Malecki has impressive size for the bantamweight division and the potential to be a contender if she can combine her Muay Thai background and toughness with the skills she’s developing at Fortis MMA and synthesize that into an approach that works inside the Octagon. She showed flashes in her debut and gets the chance to impress again this weekend.