URIAH HALL VS GEGARD MOUSASI
Gegard Mousasi was winning his first fight with Uriah Hall in September of 2015 pretty convincingly before getting caught and finished in the second round. Since then, the Netherlands veteran has been only getting better, while Hall has lost two straight. What does that mean on Saturday? Nothing, because when Hall is on, he’s got the talent to beat anyone at 185 pounds, and if we get that guy, all bets are off.

STEVIE RAY VS ROSS PEARSON
British veteran Ross Pearson went old school for this fight, training back in England in an effort to recapture that special something that got him to the UFC in the first place after only going 2-4 in his last six. Whether he’s got it back or not, Pearson is a handful for anyone at 155 pounds, which makes his bout with Scotland’s Stevie Ray a compelling crossroads matchup.

ALEXANDER VOLKOV VS TIM JOHNSON
With 26 wins and 18 knockouts, Alexander Volkov is a nice addition to the UFC’s heavyweight division, but Tim Johnson is one of those guys who just finds a way to win, so if Volkov can get past the American in his first trip to the Octagon, he may just make some noise among the big boys here.

TERUTO ISHIHARA VS ARTEM LOBOV
In just three fights, Japan’s Teruto Ishihara has made himself a must see in the featherweight division, and if he’s taken enough time from chasing the ladies to put in a quality training camp, it should be a barnburner with SBG Ireland’s Artem Lobov, a fighter with the power to make each swing a potential fight ender.

NEIL SEERY VS IAN MCCALL
It will be sad to see Neil Seery leave the sport, but you will have three more rounds of the Dubliner before he retires after his bout with Ian McCall. And no matter who wins, there will be fond memories of “2Tap,” as this matchup with “Uncle Creepy” will undoubtedly produce fireworks.

JACK MARSHMAN VS MAGNUS CEDENBLAD
Magnus Cedenblad is one of the most underrated middleweights in the world, and while Jack Marshman has gotten the bulk of the attention leading up to his Octagon debut as the first fighter from Wales to be signed to the UFC, Sweden’s Cedenblad is no welcome mat to be stepped on. Far from it.

ALI BAGAUTINOV VS KYOJI HORIGUCHI
A matchup that has sailed under the radar, this bout between Ali Bagautinov and Kyoji Horiguchi pits two of the best flyweights in the world against each other, with the winner likely to make a nice jump of a few slots in the 125-pound rankings next week.
RELATED: Belfast Cheat Sheet | UFC Breakdown - On the Mat | Fight Focus

MAGOMED MUSTAFAEV VS KEVIN LEE
Another fight that hasn’t gotten the attention it deserves thus far is between lightweight up and comers Magomed Mustafaev and Kevin Lee. Mustafaev has been a beast thus far in the Octagon, stopping both Piotr Hallmann and Joe Proctor, but as Lee showed in his finish of Jake Matthews, he’s just as dangerous at 155 pounds.

AMANDA COOPER VS ANNA ELMOSE
Amanda Cooper and Anna Elmose didn’t get to show off their talent in their first UFC bout earlier this year, but Saturday night will be a second chance to make a first impression for these strawweight prospects.

MARK GODBEER VS JUSTIN LEDET
Not only is Mark Godbeer coming to the UFC with one of the best nicknames in recent history (Mark “Hand of” Godbeer), but he’s got legitimate power in his hands and he’s not afraid to use it, which puts him right in the wheelhouse of Justin Ledet, who is no stranger to a good ol’ fashioned slugfest himself. 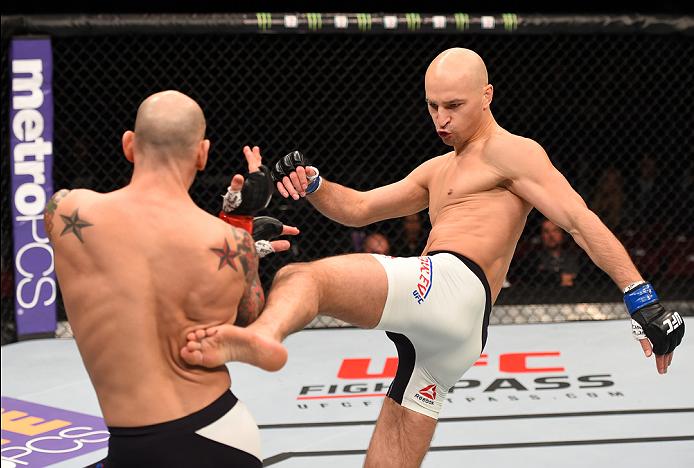 Welterweights Alexander Yakovlev and Zak Cummings may not be making highlight reels on a regular basis, but these are two solid veterans who are looking for that defining win to take them to the next level. We’ll see if Saturday produces that win for one of them.

MILANA DUDIEVA VS MARION RENEAU
After taking a break from the sport to have a child, Milana Dudieva returns to face Marion Dudieva in a clash of two of the baddest moms in the world. But motherly storylines aside, Reneau is likely to come out guns blazing in this one following a controversial split decision loss to Ashlee Evans-Smith, leaving the idea of going to the scorecards again in the dust.

KWAN HO KWAK VS BRETT JOHNS
One of the last fights added to the card has the potential to be one of the best of the night, as Wales’ Brett Johns and South Korea’s Kwan Ho Kwak put their combined 21-0 pro record on the line in a fight that will introduce both bantamweights to the UFC faithful.

ABDUL RAZAK ALHASSAN VS CHARLIE WARD
A member of the SBG Ireland squad that has produced several UFC fighters, including some guy named Conor McGregor, Charlie Ward’s UFC debut is a highly-anticipated one, but this is no coronation, as Texas’ Abdul Razak Alhassan is 6-0 with six knockouts, with none of his fights lasting more than 1:26. Total fight time for Alhassan in six fights? Five minutes and 38 seconds.