LYOTO MACHIDA VS ERYK ANDERS
Eryk Anders has proven to be a gambler thus far in his MMA career, and a damn good one at that. No one takes Rafael Natal on short notice for their first UFC fight and then knocks him out. No one calls out Lyoto Machida after their second UFC fight, but Anders did that too. Will that gamble pay off? You might say it all depends on what Machida has left in the tank and if his chin can take Anders’ bombs. But I say that maybe Anders is that good, and that if he beats “The Dragon,” it will be his skill set and not an opponent’s age that does it. This is one of the more interesting fights taking place early in 2018, and the atmosphere should be pretty nuts being that Machida is fighting in his hometown.

JOHN DODSON VS PEDRO MUNHOZ
There are a lot of fighters that fly under the radar and then all of a sudden, boom, there they are. Pedro Munhoz is one of those fighters, and that’s amazing to me because his UFC resume is among the most impressive in the game, regardless of weight class. So he’s got all the incentive in the world to get the job done against John Dodson, but this is John Dodson. An elite fighter at 125 and 135 pounds, Dodson has said that he has take the fight out of the judges’ hands this weekend after his last two losses came via split decision to John Lineker and Marlon Moraes. And if he’s planting his feet and throwing while Munhoz is fishing for submissions, we’re in for some fight.

VALENTINA SHEVCHENKO VS PRISCILA CACHOEIRA
Unbeaten in eight pro fights, Priscila Cachoeira is not shy in describing her style as “brawler,” and she’ll have to bring a Wanderlei Silva-esque attack into the Octagon on Saturday if she wants to have a chance to beat Valentina Shevchenko. Thisclose to winning the bantamweight title last year, Shevchenko is now fighting at flyweight and it’s expected that she’ll be fighting for the belt sooner rather than later. So what does Cachoeira do with a fighter that is a technical marvel and vastly more experienced if she wants to win? She’s got to make it ugly, swing for the cheap seats, and hope to catch “Bullet” napping.
MORE FROM FIGHT NIGHT BELEM: Anders: 'I Have Unlimited Potential' | Free Fight: Machida vs Munoz | Fantasy Preview

MICHEL PRAZERES VS DESMOND GREEN
Michel Prazeres is a tank. And he’s fighting at home. May be a rough night for Desmond Green, but if anyone has the skill set to make Prazeres’ fans go home disappointed, it’s “The Predator.”

TIM JOHNSON VS MARCELO GOLM
Tim Johnson is seen by many to be the truth machine that will see if Marcelo Golm is ready for prime time, and he might be, given his rugged, swarming style. But Golm is a finisher and Johnson is coming off a knockout loss to Junior Albini, so unless the American can take this into deep waters, Golm may go to 7-0 with seven finishes.

THIAGO SANTOS VS ANTHONY SMITH
There are a lot of good matchups on this card, but this is my favorite. Santos and Smith are a combined 6-0 with six 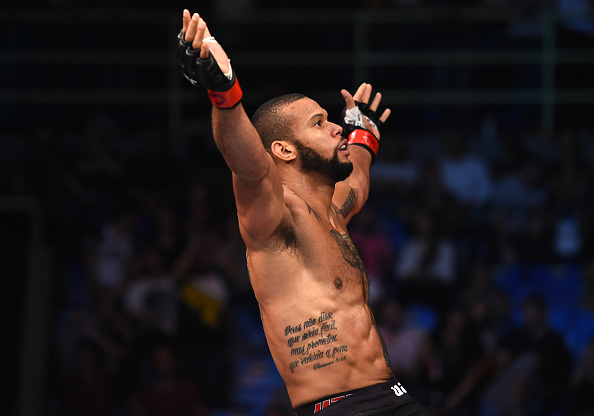 Jack Hermansson during their middleweight bout at Fight Night Sao Paulo" align="left" />knockouts in their last six bouts, so this is a clash of two fast-moving trains on the same track, and the winner here will hopefully start to get more attention, because they’ve both earned it. The key for Smith is starting fast, because he usually takes a round to get warmed up, and against a power hitter like “Marreta,” that may be too late.

SERGIO MORAES VS TIM MEANS
I always love fights between two vets who know all the tricks in the Octagon, and this is certainly one of them. Moraes is the ground wizard whose striking won’t wow you technically but can knock you out, while Means is that lanky striker who loves nothing more than a gritty close quarters game of dirty boxing. I expect three rounds of kinetic chess between these two.

ALAN PATRICK VS DAMIR HADZOVIC
Owner of a nice fanbase in Brazil, Alan Patrick returns Saturday night for the first time since September 2016, and while the lightweight division is stacked, having him back in there sets the stage for a lot of interesting matchups. One of them is right in front of him in Bosnia’s Damir Hadzovic, a finish-minded battler who proved in his come from behind knockout of Marcin Held that he’s never out of a fight.

DOUGLAS SILVA DE ANDRADE VS MARLON VERA
Having talked to Marlon Vera extensively over the last couple years, I like the way he approaches the sport and the way he’s evolved since coming into the UFC. This is guy who didn’t have much in terms of world-class MMA training in Ecuador, but he persevered and now has the squad he needs in California with Team Oyama. Silva de Andrade is a tough veteran who can finish a fight anywhere, and that’s just the kind of challenge Vera likes.

IURI ALCANTARA VS JOE SOTO
Like Moraes-Means, this fight between Alcantara and Soto is for fans of old school technique and tenacity. And while Moraes-Means is likely to become a three-round, bite down on your mouthpiece war, I’ve got a feeling that either Alcantara or Soto will pull out something flashy to end this one before the judges get involved.

DEIVESON FIGUEIREDO VS JOSEPH MORALES
A contender may emerge from this clash of unbeaten flyweights, as Deiveson Figueiredo puts his 13-0 record on the line against 9-0 Joseph Morales. Figueiredo holds the edge in Octagon experience, but Team Alpha Male’s Morales trains with killers every day, so that’s a stalemate, making this one come down to heart and talent, and these 125-pounders have both attributes for days. Could be Fight of the Night here.

MAIA STEVENSON VS POLYANA VIANA
Maia Stevenson’s 6-4 pro record won’t wow anyone as she makes her UFC debut at strawweight after competing on season 26 of The Ultimate Fighter. But she has won five straight and her amateur boxing background should serve her well against Brazilian ground ace Polyana Viana, whose 9-1 record (which includes nine finishes) will wow you. But numbers never won a fight.