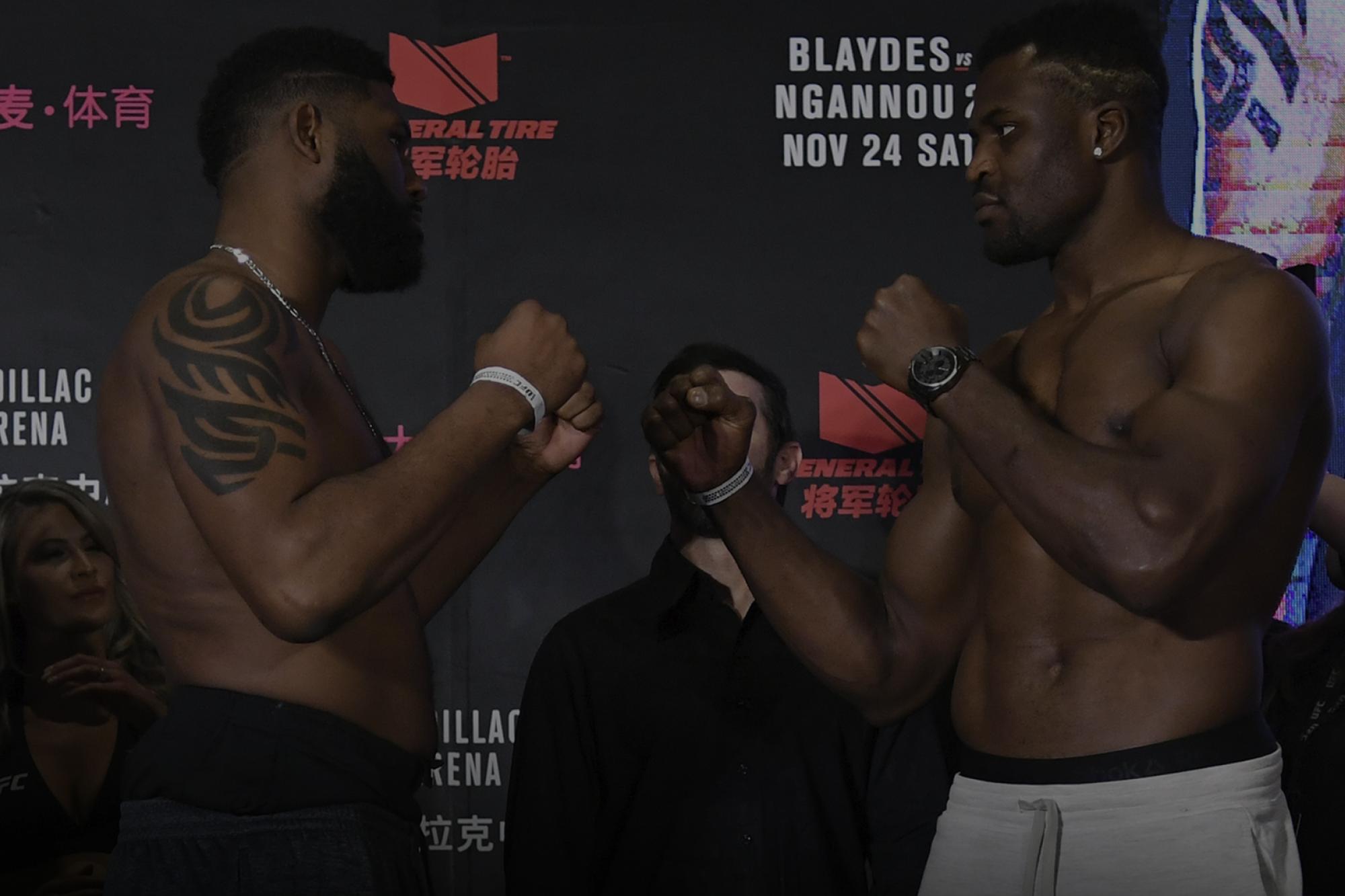 Who were the big winners at UFC Fight Night: Blaydes vs Ngannou 2? Follow along to get all the results from Cadillac Arena in Haidian Qu China.

Curtis Blaydes vs Francis Ngannou
Ngannou defeated Blaydes by TKO at :25 in Round 1.

With his hands down, Francis Ngannou waited for Curtis Blaydes to move forward and BANG. A huge right over the top dropped Blaydes to the ground and from there Ngannou added punch after punch leaving the referee no choice but to step in. Wow that main event lasted all of 25 seconds. Francis Ngannou is one bad dude.

Social Post
Alistair Overeem vs Sergey Pavlovich
Overeem defeated Pavlovich by TKO at 4:21 in Round 1.

Earlier in the week the media informed Overeem that his nickname in China was 'The Hammer' so it was fitting that at the end of the first round Overeem landed a devastating hammer fist that was the beginning of the end for Pavlovich. It started with a nice combination that ended with a trip and takedown. After a little ground and pound, Overeem landed the hammer fist that forced Pavlovich to roll away and cover up. Huge win for Overeem.

Yadong is one of the most explosive fighters in the batamweight division and it showed on Saturday night. It felt like every combination or spinning attack from Yadong was launched out of a cannon. But Morales showed great composure by staying calm and using his movement to keep Yadong out of range.

At the very end of the first round Yadong landed a spinning kick to the head but Morales walked away like nothing ever happened. In the second period it was evident that Morales was on his back heel due to the pressure and attack of Yadong. In final round Yadong took things to the mat, securing two takedowns with significant control. Great fight from both guys, but Yadong was the more dominant fighter tonight.

Social Post
Li Jingliang vs David Zawada
Jingliang defeated Zawada by TKO at 4:07 in Round 3.

The crowd welcomed fan favorite Li 'The Leech' Jingliang with a warm welcome and so did David Zawada. Right out of the gate Zawada knocked Jingliang down when he loaded up a cross and unleashed it perfectly to the chin of Jingliang. But it wasn't enough to take out 'The Leech' not even close. Throughout the entire first round Zawada's punches were finding their mark but 'The Leech' was able to avoid taking significant damage and re-gain his composure heading into the second. At the tail end of the round Jingliang started connecting, backing up Zawada to the fence in the final seconds. He landed two hooks in a row and then two or three more after the horn.

Jingliang's confidence had been building the entire fight and it showed in the final round. Hands down and pointing to the center of the Octagon, Jingliang was firing bomb after bomb until he threw a side kick that landed perfectly on the body of Zawada. The devastating heel to the body sent Zawada crumbling to the ground and he quickly tapped. What a comeback win for the

Both Morono and Kenan let their hands fly in this one, with both fighters landing good shots. Morono's high volume attack and big looping punches were effective, causing some blood to come from his opponent's nose. Kenan utilized his precision and level changing ability to mix in various strikes. Toward the end of the first Kenan landing a kick to the body of Morono that let out a slap that sound like a truck hitting a wall, but Morono appeared unfazed. Kenan also showed off his creative striking, connecting on spinning kicks and a attempting spinning back fists. The gritty style of Morono was on full display as every time Kenan would land something, Morono would attack right back.

In final round, Kenan landed some good shots in the clinch causing Morono to start bleeding. Morono slowed the pace of the fight with some grappling but he couldn't get Kenan to the ground. After a bad eye poke that sent Morono to the ground in agony, the two welterweights ended the fight by throwing wild punches. Good, competitive fight but it was his effective stand-up game that earned 'The Great White' a victory in Beijing.

Social Post
Wu Yanan vs Lauren Mueller
Yanan defeated Mueller by submission via an arm bar at 4:00 in Round 1.

Yanan Wu would not be denied in her home country. Facing the undefeated Lauren Mueller, Yanan used her quick hands to match Mueller strike for strike for much of the first round. But then Mueller caught Yanan when she was off balance with a nice punch, sending her to the canvas. Mueller pounced but that turned out to be exactly what Yanan wanted. Once Mueller started to execute her ground and pound game, Yanan grabbed hold of Mueller's arm and locked in an arm bar that had her opponent almost instantly tapping. And then she followed her Octagon performance up with one of the most energetic Octagon interviews you'll ever see.

In his first fight at light heavyweight, Coulter didn't waste anytime letting the division know that he has some power at 205. Big hooks and big crosses found their mark early and often as he bloodied up and dropped Yaozong. Despite absorbing a ton of damage, it wasn't enough to put away Yaozong. In round two Coulter was more methodical with his approach, using jabs and timed shots to measure up Yaozong. And then Yaozong landed two nice crosses in a row that put a smile on the face of Coulter moments before the end of the round.

Both fighters looked tired heading into the final five minutes, with Yaozong making a big push to land damaging shots. Throughout the fight Yaozong has utilized a calf kick to the lead leg of Coulter that slowed Coulter down as the fight progressed. It was a fun fight to watch and it felt like at any moment Coulter could land a devastating shot, but Yaozong adapted well and showed his durability. And after three attempts, it Coulter was able to secure his first UFC victory.

Social Post
Weili Zhang vs Jessica Aguilar
Weili defeated Aguilar by submission due to an arm bar at 3:41 in Round 1.

Right out of the bat Weili slammed Aguilar to the canvas from the clinch to execute her ground and pound game. While the two fighters were in the clinch Weili landed a massive elbow that opened a gash on the forehead of Aguilar. Once in side control Weili landed elbow after elbow until she moved into full-mount. From there it was a triangle that transitioned into an arm bar. Wow what a dominate performance from Weili, that makes 18 straight wins and will definitely get the attention of the division.

Both electric bantamweight displayed their athleticism early, with creative striking and submission attempts. Day's kicks are so explosive that the crowd gasps every time he throws a spinning kick or a hurricane kick. The first round was back and forth, with each fighter having their moment. At the beginning of the second round Day landed a nice spinning kick to the head of Pingyuan but Pingyuan didn't flinch. Day then moved to the body of Pingyuan, hitting him with his full arsenal of strikes. Day continued to pepper Pingyuan with precise combinations for the remainder of the round, dropping Pingyuan with a straight right in the final seconds of the round.

Even though Day was dominating the fight, Pingyuan hit Day with a cross that dropped the former Dana White Contender Series fighter. In the moments immediately after Day hit the canvas, Pingyuan secured a guillotine but Day was able to roll out of danger. Then Day went for his own submission only to lose his grip on Pingyuan. Great bounce back round for Pingyuan and despite being out striked, he earned the split decision win.

Right out of the gate both strawweights let their hands go. Xiaonan and Kondo both showed their striking skills as each fighter traded punches that had the crowd chanting. The volume from both fighters was impressive, with Xionan landing some power crosses that made Kondo think twice about pressing forward. Kondo returned fire with crisp, explosive combinations that landed flush to the head of Xiaonan.

Early in the second round a cut opened on the temple of Kondo, but that didn't stop her from constantly pressuring Xiaonan. The toughness of Kondo on absolute display as Xiaonan's efficient striking really started to pick Kondo apart. As the fight progressed it was clear that Xianon's pace and output was just too much Kondo. It was a striking extravaganza from both fighters, but Xianon was the better fighter tonight.

Social Post
Kevin Holland vs John Philips
Holland defeated Phillips by submission via a rear naked choke at 4:05 in Round 3.

The second fight of the night started off with a variety of striking and talking from Kevin Holland. His length and movement immediately causing John Phillips issues. Holland found his mark first with a front kick to the chest of Phillips that made the SBG fighter crumble and back up all the way across the Octagon to the fence. After surviving the onslaught from Holland, Phillips kept trying to get close to Holland and throw his heavy hands. Holland's kung fu style of flying knees, kicks from different angles and accurate striking continued to punish Philips. But that didn't stop Phillips from moving forward and Holland from chatting to his opponent.

In the final round of the fight Holland brought Phillips to the canvas, with Holland looking to control the back. He was able to attempt a rear naked choke but Phillips slipped out only to be lifted off his feet and slammed by Holland. Trailblazer didn't give up on his ground attack and eventually worked his way into another rear naked choke that would finish Phillips. Great display from Holland.

Social Post
Su Sumudaerji vs Louis Smolka
Smolka defeated Sumudaerji by submission due to an Arm Bar at 2:07 in Round 2.

After a year away from the Octagon, Louis Smolka started fast against Su Sumudaerji. The fight started with Smolka immediately shooting for take down and while it took some time to materialize, Smolka continued to smother Sumudaerji until he managed to secure a dominant position. Once he was on-top Smolka poured on the punishment. He was throwing shots and searching for a submission, including the final minute of the round where he had Sumudaerji on the edge of a TKO defeat but Sumudaerji made it to the horn.

Round two was a little more competitive, as Sumudaerji landed a couple decent shots before Smolka took him to the canvas. Both bantamweights attempted a variety of submissions before Smolka locked up Sumudaerji in an arm bar that he wouldn't be able to escape.

What a return for Smolka and what a start to the UFC Beijing.