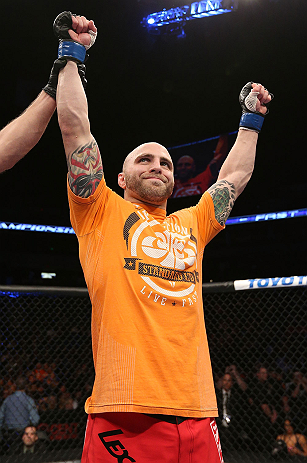 The undercard for the upcoming UFC Fight Night: Rockhold vs. Philippou show is filled to the brim with former Ultimate Fighter competitors, Strikeforce veterans and returning fighters all looking to make a big impression come Wednesday night in Atlanta.

Ramsey Nijem and Justin Edwards - former training partners on The Ultimate Fighter - will square off with both in desperate need of a win after recent setbacks.  Also on the card is a flyweight with one of the best nicknames in the sport - Alptekin 'The Turkish Delight" Ozkilic - taking on newcomer Louis Smolka.

In today's fantasy preview we will break down a few of the key fights on the undercard to see who has the advantage when it comes to scoring the most points and taking home a victory once the final horn sounds.

Former Ultimate Fighter competitors Ramsey Nijem and Justin Edwards will both be looking for a fresh start in their bout at UFC Fight Night in Atlanta.

Nijem is coming off two tough losses in a row after a promising start to his UFC career, and Edwards is also looking to bounce back from a defeat while also dropping to lightweight for the first time since joining the promotion.   Nijem made a major change for this training camp, uprooting from his home in Utah and moving out to San Francisco to begin working under the tutelage of head coach Tareq Azim - if that name sounds familiar he's also the coach responsible for Jake Shields and Gilbert Melendez.

Following those two losses in a row, Nijem felt he needed a change and this could be just the move he needed. Working with Shields, Nijem will certainly need to be on his toes for grappling, but that's a very good thing for this former wrestler.  Nijem lands his takedowns at 53 percent accuracy while averaging over five and a half takedowns per fight.  Given the team he's working with this time, Nijem could use a strong wrestling attack to keep Edwards at bay.

Edwards is no slouch in the wrestling department, but he's a lot wilder, which sometimes can attest to his up and down performances.  He only defends 26 percent of takedowns attempted and with his berserker style in the cage, Edwards could find himself planted on the mat for the majority of this fight.

Look for Nijem to set the pace early with his wrestling, then rinse, wash and repeat the same until he either earns a unanimous decision victory or finds an opening to get into an advantageous position and rain down shots until Edwards is out.

Team Jackson fighter Isaac Vallie-Flagg will make his long awaited return to the Octagon on Wednesday after nearly a year away from the UFC dealing with a back injury.  Facing him in his return will be Brazilian Muay Thai specialist and undefeated prospect Elias Silverio.

Silverio is a striker at heart with a kickboxing background.  Vallie-Flagg's roots lay in a more traditional mixed martial arts game, though he leans more towards a stand-up game in most of his fights.  Vallie-Flagg is an interesting prospect to watch at 155 pounds because he's not afraid to stand with a striker or go to the ground with a grappler. He trains with some of the best in the world while learning under the expert tutelage of Greg Jackson and Mike Winkeljohn in New Mexico, and if he can stay healthy, 2014 should be an interesting year for him.

It starts with the fight against Silverio.

Vallie-Flagg is a fighter who loves to double up on his punches and he will throw a lot of them at an opponent.  In his first fight in the UFC against Yves Edwards, who is also a striker, Vallie-Flagg landed nearly seven significant strikes per minute, which is an incredible rate.  Now his accuracy doesn't match up even close to Silverio, who lands at just over 58 percent, but if he can strike as much in this fight as he did in the last one, those numbers may not even matter.

The biggest factor that may earn Vallie-Flagg the victory is his experience.  He's faced a very tough list of fighters in his career and picked up wins over most of them.  Vallie-Flagg is a grinder with a lot of determination in his heart.  He may not win pretty, but he usually finds a way to win.  He should do it again against Silverio, but expect another decision when the night is over.

Alptekin Ozkilic, also known as 'The Turkish Delight," is a fun addition to the growing roster of the UFC's flyweight division. In his debut he took out former top ten ranked competitor Darren Uyenoyama, and this time around he gets debuting fighter Louis Smolka.

There's not a ton of information on Smolka, but he's a developing project as well, with six wins in six fights, finishing all his opponents by TKO or submission. He's not getting any favors, however, with Ozkilic as his first opponent.

Ozkilic is a top-notch grappler with quick wrestling and great submission defense, as witnessed in his fight against Uyenoyama.  He's elusive and fast to the punch as well.  If he has his way in this fight, Ozkilic will put Smolka on the mat from the opening moments of the fight and never let him breathe again.  With his background in Greco-Roman wrestling, Ozkilic has a grappling style that works in the clinch for the takedown, where he can also employ a dirty boxing game as well.  Ozkilic could be a top ten fighter very soon and this is his chance to showcase his dominance over a UFC rookie.

Ozkilic should get the win here, and if he has his way, a TKO via ground and pound might be just the ticket to earning a top ten fight in his next UFC bout.

Former welterweight Charlie Brenneman got the call on less than two weeks notice to step up and face Brazilian Jiu-Jitsu grappler and undefeated fighter Beneil Dariush on this card.  For those that remember Brenneman from his first stint in the UFC, he's a hard-nosed wrestler with good submissions. He's not the most dynamic striker in the world, but he counters that with an unbelievably tenacious attack on the mat.

Dariush takes this fight after originally being scheduled to face another wrestler in Jason High, so the transition to Brenneman shouldn't be all that difficult. Dariush is a grappling ace, having gone to the mat with some of the best in the world, but his MMA game is still very much unpolished.  He's undefeated, but he's also not faced much in the way of competition yet in his young career.

On paper, Brenneman's wrestling and desire for the ground game would seemingly play right into Dariush's hand, but there's a counter to that and it could be the difference in the fight.  Brenneman's wrestling can also keep this fight standing and that’s one place Dariush is painfully behind the 8-ball.  His grappling is superb, but his striking just isn't quite there yet.  Brenneman won't try to lie and say he's a kickboxing savant, but he's powerful with his hands, and even if his takedowns are used as nothing more than a deterrent for Dariush to try something else, it will work.

Brenneman is coming back to the Octagon and he should leave with a win, although if he finishes this, look for a knockout, which would be his first in nine UFC fights.  As good as Brenneman is on the ground - and he's very capable there - don't look for him to test the waters against a grappler the level of Dariush.  That's why this fight will likely stay standing and that favors Brenneman all day.