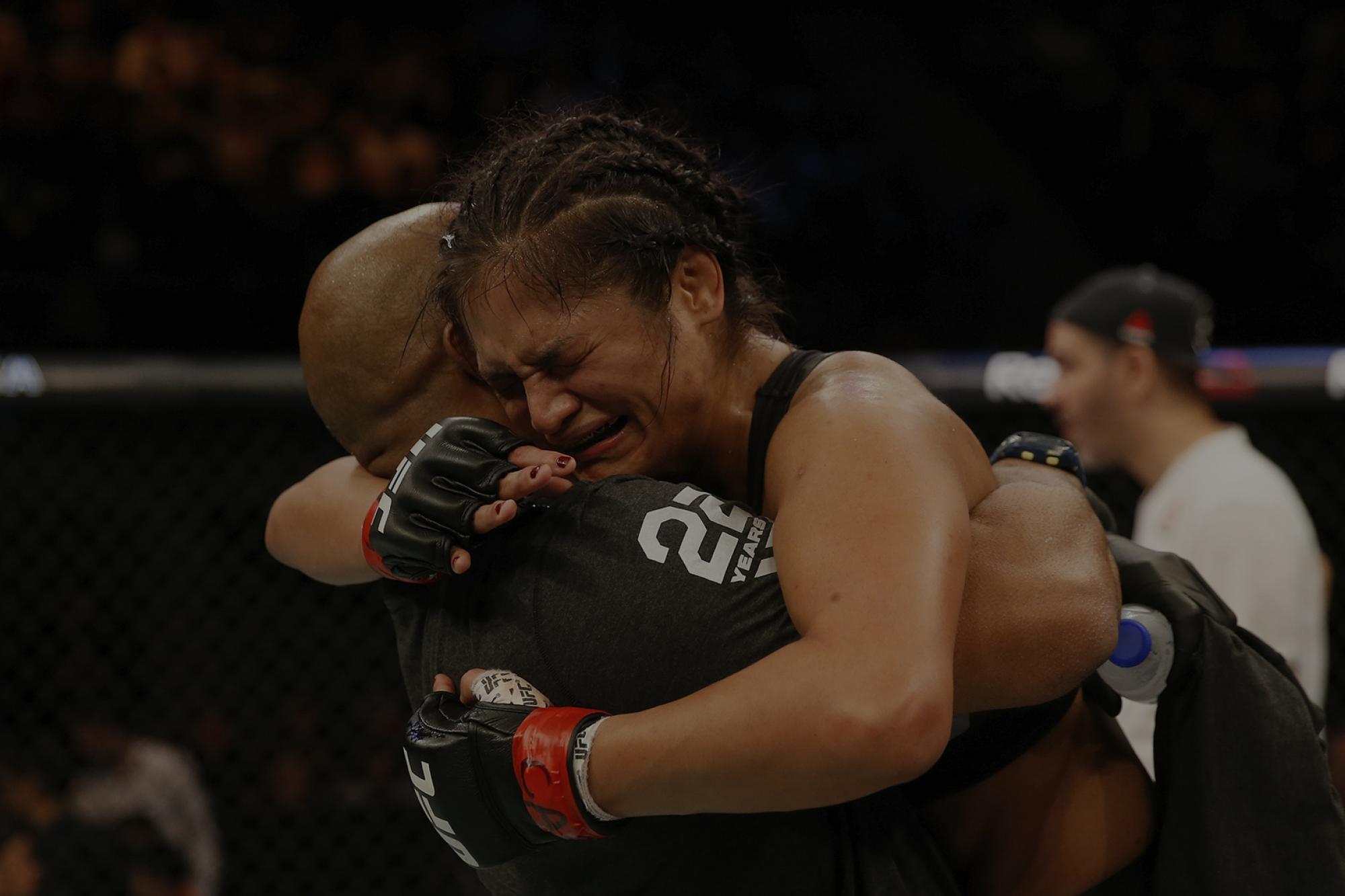 Two featherweight veterans traveled to Buenos Aires for their UFC Argentina co-main event Saturday night and Ricardo Lamas and Darren Elkins showed plenty of Midwest grit at Arena Parque Roca before “The Bully” broke the fight open in the third round and ended it with a punishing TKO victory over Elkins.

Lamas got a takedown in the opening 30 seconds, and as Elkins rose quickly, he did so with a cut under his left eye, the usual course of business for “The Damage.” When the featherweights separated, Lamas mixed up his attacks well, but Elkins was able to use his own strikes to close the distance and get his foe to the fence. Lamas reversed position and got loose, but Elkins did get his takedown off a late scramble to finish the round strong.

The two continued to battle back and forth in round two, but Lamas’ kicks to the leg began to take their toll on Elkins, who was staggered twice before getting his bearings back. The blood began to flow again, though, with Elkins again being forced to fight through a crimson mask.

In round three, Lamas and Elkins kept scrapping, but just as Elkins began getting into a late rhythm with his striking, Lamas scored the takedown and began unloading hard ground strikes. Ultimately, referee Keith Peterson had seen enough, and he stopped the fight at 4:09 of the third and final round.

Brazilian newcomer Johnny Walker made quite the impression in his first trip to the Octagon as he knocked out Khalil Rountree Jr. in the first round of their light heavyweight bout.

After taking his time getting acclimated to the Octagon in the first 90 seconds of the fight, Walker exploded with a right kick to the head and went on the attack. The Brazilian proceeded to lock Rountree up in a clinch, and a short elbow jarred the American, with a second one moments later putting the former Ultimate Fighter finalist down and out at 1:57 of the opening round.

Check Out The Results Of The Argentina Prelims

Highly-touted middleweight prospect Ian Heinisch made the most of his short-notice UFC debut, winning a three-round unanimous decision over Cezar Ferreira.

Able to adjust on the fly whenever necessary, Heinisch turned Ferreira takedowns into submission attempts in the first round, and while the Brazilian was seemingly able to use those takedowns to his advantage in the second frame, a late knockdown by Heinisch turned the fight into the Coloradan’s favor for good. In the third, the “Hurricane” jarred the tired Ferreira several times, sealing the victory on the scorecards and wrapping up an impressive first trip to the Octagon for the Dana White’s Tuesday Night Contender Series alum.

Ecuador’s Marlon Vera rebounded from a rough first round against former TUF Latin America castmate Guido Cannetti to submit the Buenos Aires native in the second stanza of their bantamweight matchup.

Cannetti was sharp from the start as he aggressively looked for the finish on the feet and the mat, and even when that didn’t happen, he pressured Vera and put together an impressive first round.

But in the second, Vera hurt Cannetti in the opening minute, and though “Ninja” was able to avoid the finish then, Vera kept the heat on, and after getting his foe to the mat, he locked in a rear naked choke that ended the bout at 1:31 of round two.

Cynthia Calvillo’s first fight since December 2017 was a successful one, as the strawweight standout submitted Poliana Botelho in the first round.

Taking a patient approach to the bout, Calvillo wasn’t deterred when she couldn’t keep Botelho on the mat early on, and when she got her second takedown with two minutes remaining, she was able to get to work, eventually sinking in the rear naked choke that forced Botelho to tap out at 4:48 of the opening round.

With the win, Sacramento’s Calvillo, who missed weight at 118 pounds, improves to 7-1. Rio de Janiero’s Botelho saw a five-fight winning streak snapped in falling to 7-2.