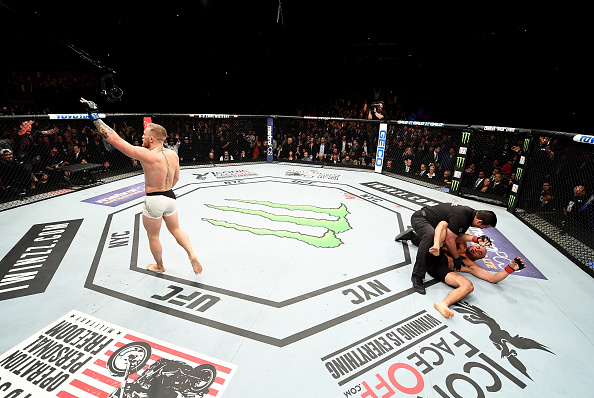 UFC® today announced the results of an economic impact analysis following its historic UFC® 205: ALVAREZ vs. McGREGOR, which took place on Saturday, November 12 at Madison Square Garden. Results of the study concluded the landmark event made significant contributions to the city and state of New York with $37.4 million in economic output and $18.3 million in salaries and wages. The event also supported an estimated 300 jobs in the New York metropolitan area and generated $1.6 million in taxes for the state.

“Mixed martial arts competitions have already proven to be major economic drivers across New York, and the jobs and revenue generated by this event illustrates the enormous impact of this growing industry in our state," said Governor Cuomo. "I look forward to seeing the further growth of this sport continue to foster economic activity, help create jobs, and further establish New York as an international entertainment hub."

UFC has pledged to hold at least four events per year in the state for the first three years since the passage of legislation to legalize and regulate professional mixed martial arts in the state. The global brand recently announced its fourth event in the state will be UFC® 210: CORMIER vs. JOHNSON 2 on Saturday, April 8, at the KeyBank Center in Buffalo.

"We said it from the very beginning, we knew New York was going to be huge," UFC President Dana White said. "It was a dream come true for the athletes, for the fans, and for our company to host a UFC event in ‘The World's Most Famous Arena.' The numbers don't lie, a lot of people came out to support us and we're going to keep doing this up and down the state."

“This record-setting event would not have been possible without the tremendous support from Governor Andrew Cuomo, Speaker Carl Heastie, Assembly Majority Leader Joe Morelle, Senator Joe Griffo and many others from across the state,” UFC Senior Executive Vice President and Chief Operating Officer Ike Lawrence Epstein said. “We look forward to hosting many more historic events throughout the state of New York, including UFC® 208 on Saturday at Barclays Center in Brooklyn and UFC® 210 on Saturday, April 8 in Buffalo.”

UFC 205® served as the global brand’s inaugural event in New York City and first in The Empire State since 1996. The event set numerous records, including a live gate of $17.7 million, which was a historical mark for both UFC and Madison Square Garden. UFC also set attendance records, global and domestic, with 15,480 at the weigh-in and 20,427 at the fight, respectively. UFC 205 also established commercial Pay-Per-View (locations / gross revenue) and social media (14 billion impressions) records, while more than 1.8 million fans watched preliminary bouts on FOX Sports 1, marking the third-highest UFC prelims on the network and most viewed ever for fans M18-49 / P18-49. UFC, in partnership with Reebok, created its first-ever event-specific product line, which recorded the highest U.S. retail performance in history. The event also made history as the first PPV event transmitted live globally in 4K.

While records were being set outside the Garden, history was also being made inside the Octagon as UFC featherweight champion Conor McGregor defeated Eddie Alvarez to capture the lightweight title and become the first athlete in UFC history to hold multiple championships simultaneously.