UFC, the world’s premier mixed martial arts organization, today announced a groundbreaking shift in the media distribution of its live events in Brazil, one of the company’s largest and fastest-growing markets.

On January 1, 2023, UFC will launch UFC FIGHT PASS® in Brazil, a fully localized version of its pioneering combat sports streaming service.  The direct-to-consumer digital service will immediately become the ultimate destination in Brazil for UFC content, featuring all live events, original programming, and the largest combat sports library in the world, including every event in UFC history.

UFC has also reached an agreement with Band, one of the largest TV broadcasters in Brazil, for free-to-air distribution of select events and original content.  FIGHT PASS, together with Band, will enable UFC to create a direct relationship with fans in Brazil.

In addition to the launch of FIGHT PASS and its new partnership with Band, UFC also revealed that it will be returning to Brazil with a live event for the first time in nearly three years, with UFC 283 on Saturday, January 21, 2023, hosted in Jeunesse Arena in the “Marvelous City” Rio de Janeiro.

“Anyone who follows this sport knows how important Brazil is to mixed martial arts and to UFC.  Brazil is one of our biggest and fastest growing markets and has produced some of the best athletes this sport has ever seen.  FIGHT PASS is going to take our business to the next level by delivering all our content directly to our fans.  Plus, we’re teaming up with Band, one of the biggest broadcasters in Brazil, which is going to provide massive exposure for UFC and help us grow our fan base and make this sport bigger than ever.  And finally-- I’m excited to announce that we’re coming back to Brazil on January 21 for UFC 283 with a stacked event you don’t want to miss – I’ll see you all there!”

UFC FIGHT PASS - THE ULTIMATE DESTINATION FOR EVERYTHING UFC

FIGHT PASS is the world’s leading digital subscription service for combat sports and a pioneer in sports streaming services, having launched in 2013.  Beginning January 1, 2023, for a launch price starting at 24.90 BRL per month (est. 5.00 USD), FIGHT PASS subscribers in Brazil will have unlimited access to:

The FIGHT PASS interface will be localized in Portuguese, including event titles, fight cards, and program descriptions.  The live broadcast of UFC events will be produced entirely in Portuguese, featuring Brazilian commentators.  FIGHT PASS will also offer thousands of hours of Original Programming in Portuguese, as well as local payment processing options and local customer service.  Fans can also search using keywords in Portuguese to access content on the platform.

FIGHT PASS in Brazil will be powered by Endeavor Streaming, a global leader in premium video distribution for live and on-demand content across sports, entertainment, and media.  Endeavor Streaming provides complete end-to-end streaming technology solutions for FIGHT PASS around the world and will now add Brazil to the FIGHT PASS roster of more 200 countries.  Endeavor Streaming is a trusted partner for leading global brands, delivering tens-of-thousands of major tentpole events annually including every UFC event and powering streaming services including WWE Network, NBA League Pass, USGA and WNBA.

Joining UFC as a broadcast partner for the first-time will be Band, one of the largest television networks in Brazil.  Band will broadcast up to 12 live UFC events, featuring a mix of main cards and preliminary bouts from numbered events and Fight Nights, marking the return of UFC to free-to-air TV in Brazil for the first time since 2018. 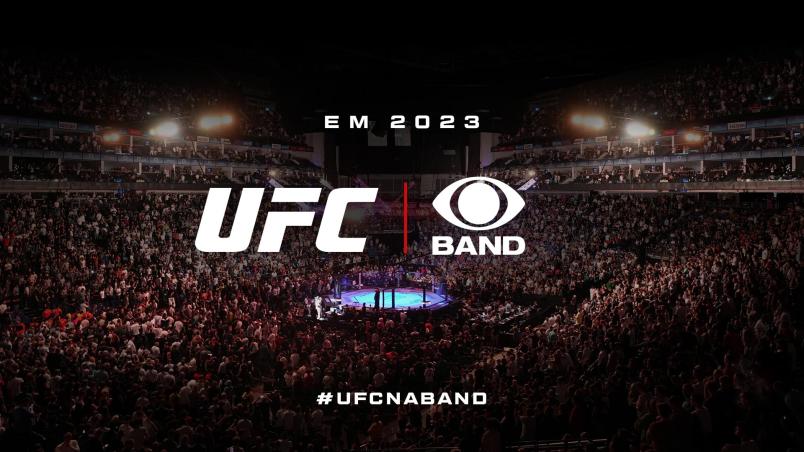 Band will also offer fans a variety of UFC content across its popular broadcast and digital platforms, including a new weekly show previewing upcoming bouts and profiling the most impactful athletes in the sport, including rising stars and dominant champions.

Additionally, Band will provide exposure for key Fight Week activities, including ceremonial weigh-ins, press conferences, fighter interviews and features, as well as programs that take fans behind the scenes such as Embedded, UFC’s all-access video content series and UFC Countdown, which examines the lives and training camps of UFC athletes as they prepare for UFC’s biggest events.

“For us at Grupo Bandeirantes, it is a source of great pride to be able to say that we are the new free-to-air broadcast partner of UFC in Brazil starting 2023,” said Denis Gavazzi, Sports Director of Grupo Bandeirantes.  “We are always looking for new and relevant products for the sports pillar of Band.  UFC is a premium sports brand with enormous importance and a huge number of fans in Brazil.  It will be an excellent partnership for all of us."

UFC has an estimated 50 million fans in Brazil, among the most of any country in the world outside of the United States.  According to recent studies, 96% of UFC fans in Brazil watch video content on streaming services, and UFC fans in Brazil are more likely to watch sports online compared to fans of most other sports.