Exciting matchups and long-awaited bouts kick off the year.
By Thomas Gerbasi, on Twitter @tgerbasi • Dec. 13, 2019

2019 may be coming to a close, but the UFC is not taking its foot off the gas when it comes to the New Year, as the promotion announced several major bouts coming to an arena near you in the first four months of 2020. 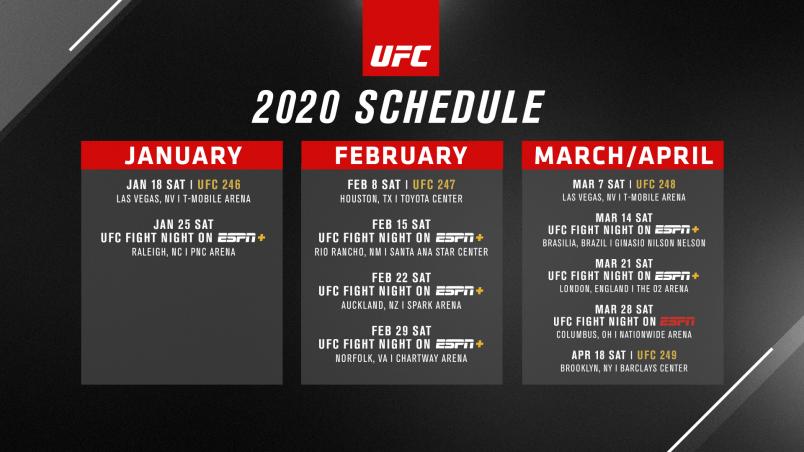 In addition to championship bouts and main events already announced for cards in Raleigh, Houston, Rio Rancho and Auckland, events in Las Vegas and Brooklyn were made official, featuring some of the sport's biggest stars.

On January 18, the year kicks off at T-Mobile Arena in Las Vegas with an event featuring the return of Irish superstar Conor McGregor in a welterweight bout against Donald "Cowboy" Cerrone.

In March, the Octagon will be back in T-Mobile Arena with a strawweight championship bout pitting China's Zhang Weili against former titleholder Joanna Jedrzejczyk.

Capping off the announcements was the UFC's return to Brooklyn, New York, where the long-awaited and highly-anticipated showdown between unbeaten lightweight champion Khabib Nurmagomedov and Tony Ferguson finally becomes a reality.