The app, which debuts today, will be available to download for free on select iOS and Android devices via the Apple App StoreSM and Google Play™. 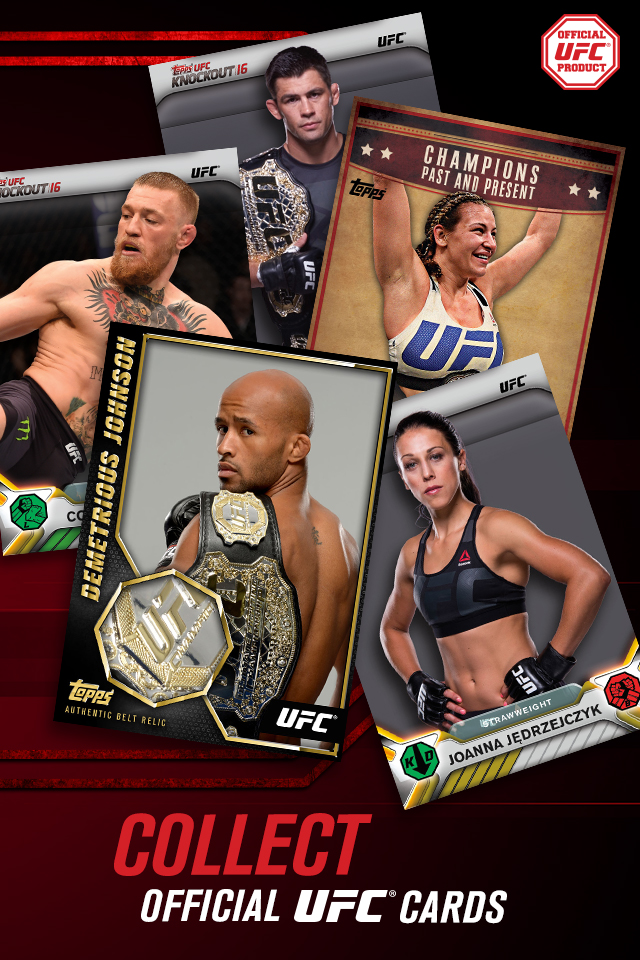 “Topps has been a great partner and we’re thrilled to offer fight fans a new way to experience UFC in the digital realm while watching live events,” UFC Senior Vice President of Global Consumer Products Tracey Bleczinski said. “Fans are really going to enjoy collecting and trading their favorite UFC athletes in real-time.”

“We’re excited to expand on our relationship with the UFC by introducing engaging and easily accessible digital trading cards to keep up with the demand of UFC fans around the world,” said Jeremy Strauser, Vice President and General Manager of Topps Digital. “We see the enormous impact and global popularity of the UFC, so UFC KNOCKOUT 16 is a natural fit for Topps’ apps portfolio.”

“It’s a thrill to be on the cover of the new Topps UFC KNOCKOUT app,” Johnson said. “I’m a big gamer and to be a part of a new app for an iconic company like Topps is an honor. I can’t wait to dive into the product to collect, trade and play with the world’s most passionate UFC fans.”

New digital cards and sets will be released daily in UFC KNOCKOUT. The app will feature a variety of trading cards with unique artwork, including digital versions of athlete memorabilia and autographs. To learn more, visit http://www.topps.com/topps-apps/.

Topps UFC KNOCKOUT 16 will debut just ahead of the 5th annual UFC International Fight Week™, which takes place from Tuesday, July 5 through Sunday, July 10 in Las Vegas, Nevada. The world’s largest celebration of combat sports, UFC International Fight Week will feature the UFC Fan Expo® and numerous fan activations throughout the week. Topps UFC Knockout 16 will be on display for fans at the Topps booth during the UFC Fan Expo, which takes place from Friday, July 8 through Sunday, July 10 at the Las Vegas Convention Center. Fans that visit the booth can unlock free and exclusive digital cards to help start their collection.

The landmark week is highlighted by three events in three nights, culminating in the historic UFC® 200: CORMIER vs. JONES 2, on Saturday, July 9 at T-Mobile Arena. At the conclusion of UFC International Fight Week, Topps will also launch “ToppsNOW UFC”, exclusive, on-demand cards from Fight Week events. ToppsNOW cards are available for a limited time at https://www.topps.com/collectibles/trading-cards/topps-now.html/. Topps will also continue to release physical card collections, including new products such as: UFC Museum Collection and UFC Fire, set for release later this year.