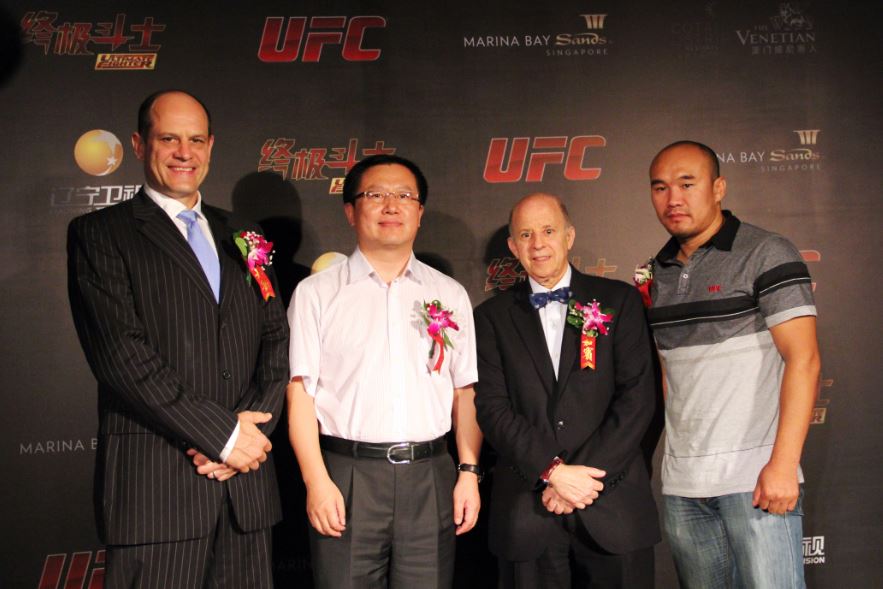 Following the enormous success of last November’s live event at The Venetian® Macao’s CotaiArena™, Sands China Ltd. and the Ultimate Fighting Championship® are announcing a new, multi-year partnership which will bring regular live UFC® events to Asia, as well as produce a Chinese version of the UFC’s hit reality series The Ultimate Fighter® for the first time.

Beginning in 2014, the UFC will stage a series of live events at both The Venetian Macao and Marina Bay Sands, the luxury Singapore property of Sands China’s parent company, Las Vegas Sands Corp.

Cotai Strip Resorts Macao and Marina Bay Sands will also be the presenting sponsors of The Ultimate Fighter China. The Ultimate Fighter is the world’s long-running sports reality series, which has launched over 100 UFC careers including world champions Forrest Griffin, Rashad Evans and Matt Serra. TUF® China will be a 12-part series where the best Chinese mixed martial artists in the world will live, train and compete with each other to win a six-figure contract with the UFC.

The highly anticipated Chinese edition of The Ultimate Fighter will be co-produced by UFC and Liaoning Radio Television and is scheduled to premiere this November on Liaoning Satellite TV, reaching more than 830 million viewers across China. The live Finale event to determine the inaugural champion of The Ultimate Fighter China will be held at The Venetian Macao’s CotaiArena in March 2014.

Mark Fischer, Executive Vice President and Managing Director of UFC Asia, said: “We are very excited to announce these new partnerships with Sands China and Liaoning Radio Television. With Sands China’s support we will be bringing regular events to the region, as well as the Chinese edition of The Ultimate Fighter. This is an unprecedented initiative for any global sports league in China. With national distribution through Liaoning Satellite TV, we will not only develop the next generation of UFC fighters from China, but also introduce the UFC to millions of new fans across the region.”

Edward Tracy, President and Chief Executive Officer of Sands China Ltd., said: “Sands China is looking forward to continuing to work with the UFC in bringing the world’s greatest MMA athletes and events to this region. November 2012’s UFC Macao was a big success and we are excited that this new partnership will enable us to continue to host these high-octane, world-class sporting events, and to take advantage of this unique opportunity to identify promising MMA fighters in China. It’s all part of Sands China’s multi-tiered entertainment strategy, helping to diversify the entertainment offering in Macao.”

“We are pleased to bring UFC centre-stage not only to Macao, but also to our Singapore property,” said George Tanasijevich, President and Chief Executive Officer of Marina Bay Sands. “Marina Bay Sands is proud to host several UFC events over the coming years. This partnership is part of our ongoing commitment to Singapore to offer the best in international sports and entertainment for our guests and for the local population.”

“Liaoning Radio Television (LRTV) is thrilled to be broadcasting The Ultimate Fighter China on Liaoning Satellite Television as well as taking an active role in co-producing the series with UFC. With LRTV’s top production teams from mainland China and Hong Kong working alongside UFC’s team, the Chinese audience will experience the best elements of its U.S. format while adopting a localized approach which will emphasize athletes’ personal stories and profiles,” said Zeng Shaowu, Deputy Chief Editor of LRTV. “Combining the dynamic sport of the UFC with the talent present in China, I believe The Ultimate Fighter will showcase the spirit and strength of China within the country and to the world.”

The registration process for The Ultimate Fighter China, with full details and application, is available online at sports.sohu.com/tuf2013. To be eligible, candidates must be: male, age 18-34, have professional mixed martial arts experience, speak Mandarin, be of Chinese descent and able to compete as a featherweight (145 pounds/66 kilograms), lightweight (155 pounds/70 kilograms) or welterweight (170 pounds/77 kilograms).

Successful applicants will attend tryouts in Beijing July 21 at the Lido Hotel and in Singapore July 25 at the Marina Bays Sands.