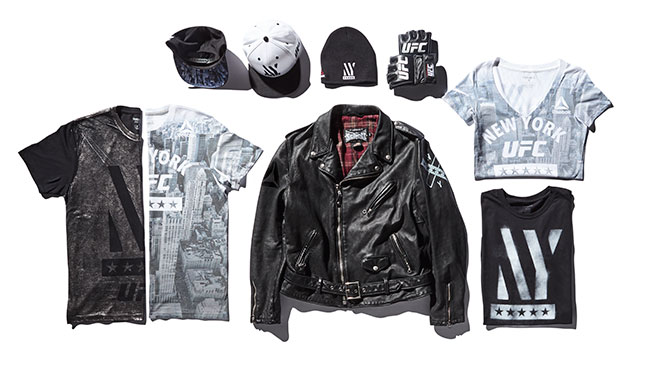 “We’re excited to reveal our UFC City Pack: New York leading up to our historic event next Saturday at Madison Square Garden,” UFC Senior Vice President of Global Consumer Products Tracey Bleczinski said. “This New York inspired and limited edition product line represents the strength of the city and its rich fighting history, while paying homage to the historical significance of hosting our first event at The World’s Most Famous Arena.”

“New York City holds an unmatched fighting heritage derived through a legendary boxing culture and history. UFC 205 will no doubt tap into that passion and excitement. The NYC-inspired UFC Fight Kit embodies the famous fight culture of the city,” said Marc Leonardo, Design Director, Reebok Combat. “We used a simple but stark color palette, incorporating black, white and silver. The iconography was raw and gritty – which evokes a mood that mirrors the community around New York City that is enamored with combat sports. The leather jacket and partnership with Schott N.Y.C was an exciting build to the pack, giving it a fusion of grit and style that NYC is synonymous for.”

As the first event-specific product line in UFC’s 23-year history, the collection features authentic apparel for the walkout and weigh-ins, including headwear, t-shirts, hoodies and shorts for both males and females. The assortment also showcases two concept products that will be received by the athletes competing on the card, a premium leather Reebok bag and an exclusive leather jacket, produced in association with Schott N.Y.C. The leather bag will be available in limited quantities at select merchandise venues at UFC 205, while the exclusive leather jacket will not be for sale.