Though it wasn’t a finish to end up on highlight reels or a greatest finishes compilation, it was the 500th knockout to be scored in the UFC Octagon
By Thomas Gerbasi • Oct. 29, 2019

Ross Pearson wasn’t going to lose this one. Sure, “The Real Deal” had already earned a UFC contract by defeating Andre Winner for The Ultimate Fighter 9 title and he was quickly joining Michael Bisping and Dan Hardy as the faces of British MMA, but this fight at the MEN Arena in Manchester on November 14, 2009 was different.

Bisping and Hardy were on the card, beating Denis Kang and Mike Swick, respectively, but headlining the UFC 105 event was Pearson’s fighting hero, Randy Couture. THAT was important for Pearson, who talked of making sure he found a poster for “The Natural” to sign on fight week.

It was a reminder that every fighter began as a fan, and many never lost that love for the game and the heroes that influenced them. And there’s also the reality that competing at home in England for the first time as a UFC fighter really struck a chord with Sunderland’s Pearson, who told me of the time the Octagon rolled into Newcastle in January 2008 while he was working as a bricklayer and part-time fighter. 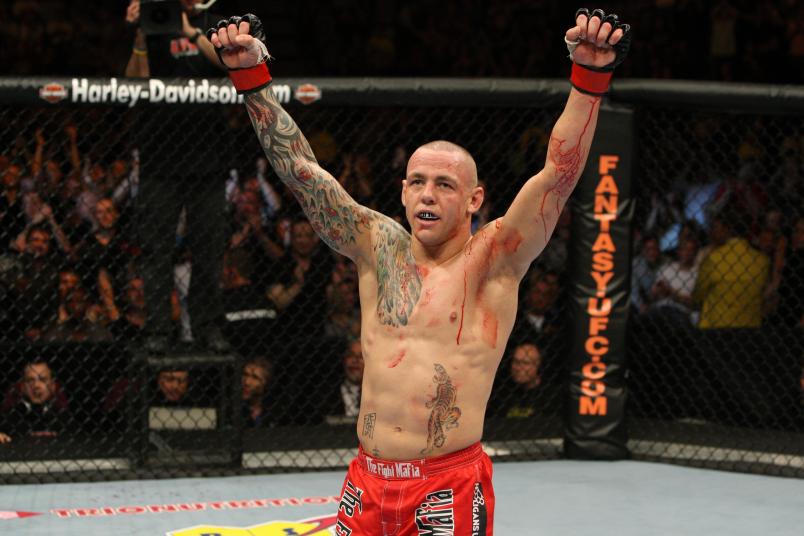 “I was working on a building site right next to there,” said Pearson. “We went along to watch the weigh-ins and I stood outside trying to get tickets and I remember the feeling of hearing that BJ Penn was staying in the hotel right near where I lived. There was all this excitement about the UFC, and I was working on a building site. But it hit home that this was what I wanted to do and what I wanted to be.”

He achieved his dream, and with all that behind him, his opponent at UFC 105 – Aaron Riley – didn’t have a chance. And that’s saying a lot, as Riley was one of the most durable fighters ever to compete in the Octagon, and one coming off wins in two of his previous three bouts. But on this night, Pearson was on top of his game, dominating the striking action before a knee opened up a cut on Riley. The bout was halted soon after, and the two fighters went off in different directions – Pearson to a UFC career that ultimately spanned 26 bouts, and Riley to retirement after three more Octagon appearances.

And though it wasn’t a finish to end up on highlight reels or a greatest finishes compilation, it was the 500th knockout to be scored in the UFC Octagon, adding a little history to one of Ross Pearson’s greatest fighting nights.