UFC 283 is taking place on Saturday from Jeunesse Arena in Rio de Janeiro, Brazil, and the event is stacked with two title fights. The first title fight is between Deiveson Figueiredo and Brandon Moreno for the UFC flyweight championship. This will be the fourth fight between the two, and Figueiredo and Moreno are 1-1-1 against each other in three previous fights.

The main event is between Glover Teixeira and Jamahal Hill for the vacant light heavyweight championship. Jiri Prochazka beat Teixeira for the title last June, but Prochazka was forced to vacate the title due to injury. A title fight draw between Jan Blachowicz and Magomed Ankalaev at UFC 282 resulted in the title remaining vacant leading into UFC 283.

Topuria won by submission in the second round and out-struck Mitchell 40 to 36 in total significant strikes landed. One of those significant strikes resulted in a knockdown. Prior to being submitted, Mitchell recorded the only takedown of the fight and finished the fight with one takedown compared to 0 for Topuria. As a result of all of these outcomes hitting, the bettor successfully cashed their Same Game Parlay bet and took home a profit of $1,800. 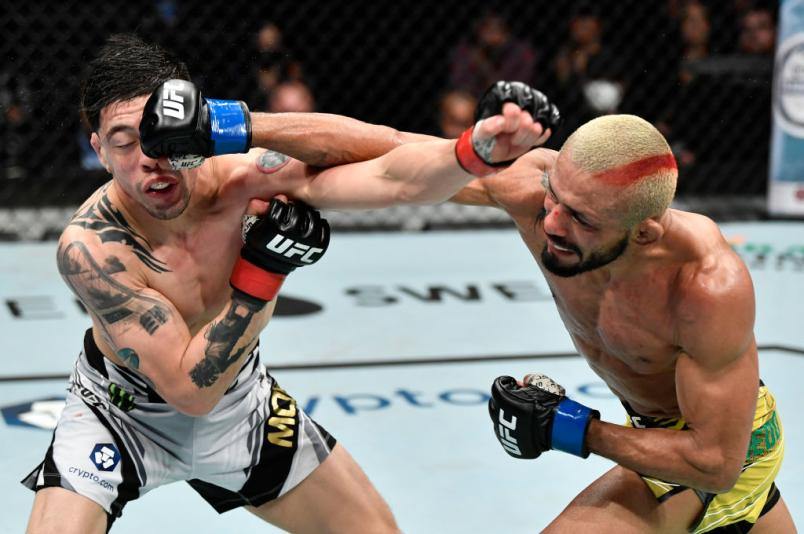 Deiveson Figueiredo of Brazil punches Brandon Moreno of Mexico in their UFC flyweight championship fight during the UFC 270 event at Honda Center on January 22, 2022 in Anaheim, California. (Photo by Chris Unger/Zuffa LLC)

Despite Figueiredo showcasing explosive fight-finishing skills against most of the flyweight division, Brandon Moreno’s iron chin and incredible toughness have resulted in two of their three fights going the distance over 25 minutes.

Figueiredo vs. Moreno 1 was a classic fight and highly competitive. Figueiredo landed several vicious strikes that would have badly hurt most other opponents, but Moreno’s iron chin allowed him to eat the shots. The final striking tally was very close, with Figueiredo landing five more significant strikes—137 to 132. The fight officially ended in a draw, but Figueiredo would have won a decision had he not been deducted a point for a groin strike.

In their third fight, Figueiredo finally wobbled Moreno’s iron chin, officially knocking Moreno down three times. The biggest blow of the fight came in the final seconds of Round 3, where Figueiredo landed a hard right straight to knock Moreno down and was working on a front choke as the clock ran out. Moreno may have been saved by the bell, as more time on the clock could have resulted in a finish given Figueiredo’s potent submission game. Figueiredo also was much more aggressive with offensive wrestling in their third fight, attempting 11 takedowns, easily the most takedown attempts he’s recorded in a fight in the UFC. Figueiredo’s power punching ultimately helped him win a decision despite being out-struck 105 to 86 in total significant strikes. Moreno out-struck Figueiredo in both total head strikes (71 to 40) and total distance strikes (100 to 80), but Figueiredo’s strikes to the head were more impactful and did more damage.

The fourth fight could have a similar theme to the third fight. Figueiredo’s striking defense is leaky, as he is prone to keeping his hands remarkably low, which makes him hittable. As a result, Moreno has more clearance to register striking volume. Through three fights, Moreno has landed 284 total significant strikes, compared to 247 for Figueiredo. However, Figueiredo has the clear edge in power striking, which the judges take into account when rendering their decision.

Both fighters are incredibly tough and difficult to finish, so this has the makings of another long fight between two fighters who know each other extremely well. Moreno has not officially been finished in any of his professional fights, although he was finished once on The Ultimate Fighter, which is not included on his pro fight record. The only time Figueiredo was ever finished was in their second fight, which Figueiredo attributes to a poor weight cut.

Because both of these fighters are so incredibly tough and fight at a weight class that has less mass and less force behind it, we could see another fight go to decision. Taking the fight to go the distance also creates margin for error in picking the winner.

Jamahal Hill is an explosive power striker who has excellent striking metrics. Hill is landing over six significant strikes per minute and has landed almost double the amount of strikes he has absorbed, which is an excellent ratio. Hill’s striking metrics outshine Teixeira, who has absorbed about the same amount of strikes he has landed at roughly four significant strikes per minute.

Hill also carries the length and reach advantage, which is notable for distance strikes. Hill is taller and has a three-inch reach advantage. If this fight stays at range, Hill will be very dangerous with his power striking and volume.

However, Teixeira is the more well-rounded fighter and has a substantial edge in grappling. Hill does not have a big wrestling or grappling background and has been susceptible to being taken down. Hill has stopped only 65% of opponent takedown attempts and got taken down six times in his most recent fight against Thiago Santos.

If Teixeira can fight inside on the feet to negate the reach disadvantage and drag this fight to the ground, he will be in position to capitalize with his superior ground game. Teixeira is a BJJ black belt and four of his last six wins are by submission. Hill has also been vulnerable to submissions on the ground, which was most notable in his fight against Paul Craig where a tight armbar/triangle caused a referee stoppage due to a dislocated elbow. The fight is officially listed as a TKO loss, but only because Hill did not tap.

Glover Teixeira’s style generally makes him a strong fantasy scorer. Teixeira blends striking and grappling together and registers a lot of control time, which gives him multiple pathways to produce fantasy points. Teixeira has scored over 100 DraftKings fantasy points in each of his last four fights. Teixeira’s affordable price tag of $7,800 makes him appealing in a winnable matchup against Jamahal Hill, who may struggle to fend off Teixeira’s grappling. Teixeira’s fight is also a five-round fight, which potentially creates 10 extra minutes to generate fantasy scoring.

The main DraftKings fantasy UFC tournament has a massive prize pool of $500,000 this week, with the winner getting $100,000. Enter the contest for only $25 here.