With A Capacity Crowd Expected At UFC 283: Teixeira vs Hill, We Spoke To Three Athletes On The Card Who Also Competed On UFC’s First Crowdless Event in March 2020
By Zac Pacleb, on Twitter @ZacPacleb • Jan. 20, 2023

When UFC 283: Teixeira vs Hill gets underway, it’ll not only be the first UFC event in Brazil since March 2020. It also represents the first UFC card in front of Brazilian fans since November 2019, when Jan Błachowicz and Ronaldo “Jacaré” Souza headlined the festivities in São Paulo.

Charles Oliveira and Kevin Lee hoped to give fans an exciting main event in Brasilia, but as has been well-documented, the March 14 fight day was mired in COVID-19 chaos. With more questions than answers, the fights went ahead, but with an empty arena environment that everyone would get accustomed to over the next couple years.

Thankfully, empty-arena events appear to be a thing of the past, and Brazilian fans can finally drink in a night of fights and show why they can create a unique setting for mixed martial arts. Three athletes competing at UFC 283 – Brandon Moreno, Gilbert Burns and Johnny Walker – also competed in that first foray into crowdless UFC fights back in March 2020, and UFC.com asked them what they remembered about that event. 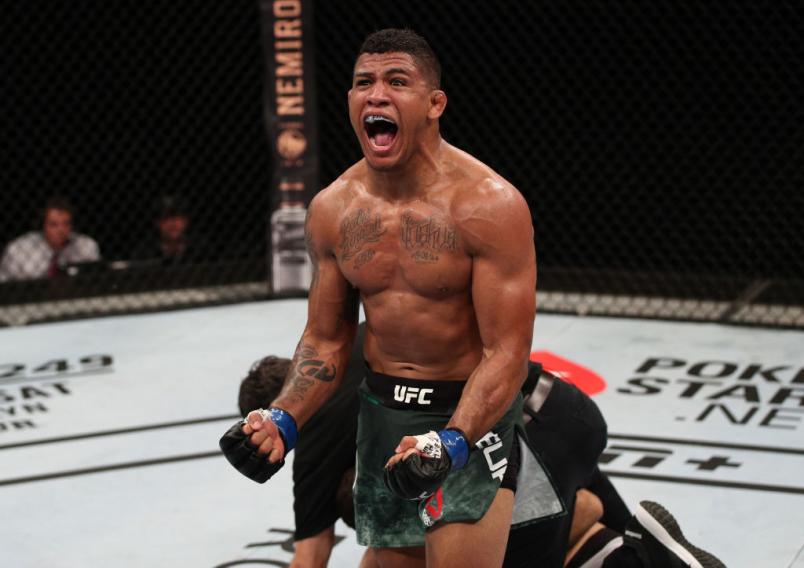 Gilbert Burns of Brazil celebrates after his TKO victory over Demian Maia of Brazil in their welterweight fight during the UFC Fight Night event on March 14, 2020 in Brasilia, Brazil. (Photo by Buda Mendes/Zuffa LLC)

All three cited the confusion that buzzed around the event as they tried to focus on their respective weight cuts, as if making weight isn’t already a mentally challenging thing to go through.

On March 8, the National Basketball Association suspended its season when Rudy Gobert tested positive for COVID-19. Sports leagues around the world followed suit, including the English Premier League, which suspended its operations on March 13 – the eve of UFC Fight Night: Oliveira vs Lee.

“Everything was fine until Thursday night,” Moreno, who fought Jussier Formiga, recalls. “Actually, after my weight cut, (there was) all the rumors and all the people talking about the pandemic. Friday morning after the official weigh-ins, UFC gave us the official announcement about the no crowds. It was weird.”

The uncertainty about whether the fights would go on put a particular amount of stress on Burns, who was scheduled to fight Damian Maia in his third fight back up at welterweight. A win over the Brazilian legend would launch Burns into contention, but first, he had to be able to actually fight him, which was suddenly in jeopardy.

“I remember it was crazy walking in Thursday night,” Burns said. “They said, ‘We don't know if you guys are going to have a fight or not.’ So, I’m trying to make weight, but we're not sure if we're going to have the fight, and I was so ready. The weight was so low, everything was so smooth. I was like, ‘I don’t care if there are fans, no fans. I want to fight.’” 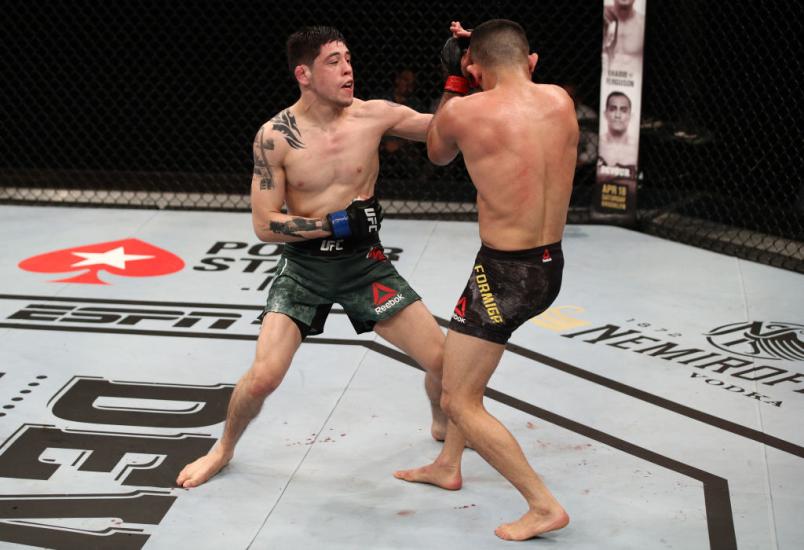 Brandon Moreno of Mexico punches Jussier Formiga of Brazil in their flyweight fight during the UFC Fight Night event on March 14, 2020 in Brasilia, Brazil. (Photo by Buda Mendes/Zuffa LLC)

With the fights going on as scheduled, the fighters then had to adjust to an empty arena for the first time. The Nilson Nelson Gymnasium in Brasilia can hold more than 11,000, but the only people in the Arena during each fight were the two people competing, the referee, the commentary team and the judges at cageside. Naturally, that atmosphere - or lack thereof -impacted the athletes in a variety of ways.

“The first fight without crowd was really shocking a little bit because you walk into the arena and you see nobody,” Walker, who fought and lost a decision to Nikita Krylov, said. “It just looked like a dream, like, ‘What's going on?’ Everybody felt a little bit depressed the first time because we always fight for the crowd.”

Burns, who expected a large amount of friends and family in the crowd for the biggest fight of his career to that point, had to help them find somewhere else to watch. Once he got to the arena, though, he struggled to lock in and focus at the monumental task at hand.

“I remember the crazy thing going to the fight was when they said, ‘OK, now we're going to the fight, going to start walking,’” he said. “I had a long walk before I got to the place to start my walkout song, and there was like a silence, but so much so that I start hearing my heartbeat, and I said, ‘Man, why is it so quiet?’ It was too much. I was like, ‘Man, it doesn’t feel like I’m fighting,’ and they said, ‘OK, now we are walking,’ and my music was going on, and I was walking. The arena was empty. It was not like the UFC APEX because the APEX is super small. The arena was huge. It was kind of echoing. It was different. 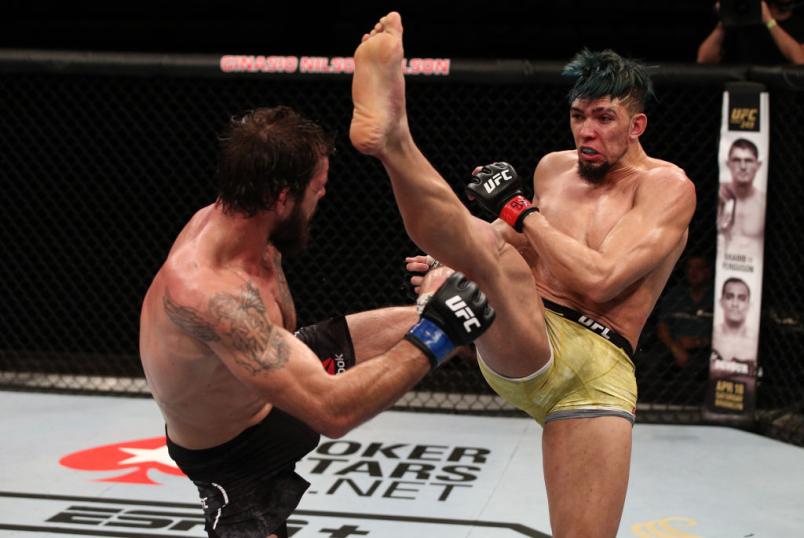 Johnny Walker of Brazil kicks Nikita Krylov of Ukraine in their light heavyweight fight during the UFC Fight Night event on March 14, 2020 in Brasilia, Brazil. (Photo by Buda Mendes/Zuffa LLC)

Burns went on to knock Maia out midway through the first round, which solidified him as a real contender at 170 pounds, a spot he has held ever since.

While Burns could recall plenty of the details of that night, the scenes are a little more sparse for Moreno.

“I remember it was a weird event because the arena was huge but empty,” Moreno said. “But all I remember was (being) focused on the fight.”

Moreno got the unanimous decision nod over Formiga that night. He and Burns would each have one more fight (victories over Brandon Royval and Tyron Woodley, respectively) in the UFC APEX before challenging for UFC gold while Walker struggled before bouncing back with a submission win over Ion Cutelaba last time out.

Moreno drew with Deveison Figueiredo, kicking off their iconic rivalry which (likely) sees its conclusion at UFC 283 when they face off for a historic fourth time. Meanwhile,  Burns fell short to Usman at UFC 258, and after splitting his last two fights against Stephen Thompson and Khamzat Chimaev, he hopes to climb back into the title picture when he faces Neil Magny in Rio De Janeiro.

All paths led each man to UFC 283, a historic event for several reasons, but if UFC’s return to London in 2022 is anything from which to draw expectations, the energy in the crowd should match the high-level fights going down on January 21.