UFC International Fight Week is taking place in Las Vegas this week, and the week is headlined by the 2022 UFC Hall of Fame Induction Ceremony, along with a stacked UFC 276 card. The main event of UFC 276 is a middleweight title bout between champion Israel Adesanya and challenger Jared Cannonier. Adesanya, who is one of the top strikers of his era, has nearly cleaned out the division and enters this fight as a big favorite on DraftKings Sportsbook. The second title fight on the card is a trilogy fight between featherweight champion Alexander Volkanovski and former champion Max Holloway.

Other notable names on the UFC 276 card include rising star Sean O’Malley, top-five middleweight Sean Strickland, and elite kickboxer Alex Pereira. Pereira is best known for beating Israel Adesanya twice in kickboxing matches. If Pereira can get past Sean Strickland, he could enter the title picture and potentially fight Adesanya again, this time in the UFC.

Order UFC 276: Adesanya vs Cannonier | How To Watch In Your Country

Below, we examine some of the UFC betting offerings for the event by DraftKings Sportsbook and give bets to consider.

The best path to beat Adesanya is through takedowns and top control. Jan Błachowicz executed this game plan in his win over Adesanya in March 2021, but that fight was at light heavyweight. Błachowicz enjoyed an extra 20 pounds of bulk, which helped make takedowns and top control far easier. At middleweight, Adesanya has been difficult to take down and hold down for long. Adesanya has been taken down four times in each of his last two fights, but was able to get back to his feet without giving up much on the ground.

Cannonier does not have the elite wrestling background to keep Adesanya on his back, which strongly limits his ways to win. Cannonier has recorded only two total takedowns in 13 UFC fights, which is a paltry rate of 0.23 per 15 minutes. That should turn this into primarily a striking match, where Cannonier will be badly overmatched by Adesanya. Adesanya is one of the best strikers in the entire sport.

Cannonier has been knocked out twice in his UFC career and was dropped by strikes in his most recent fight against Derek Brunson. Without having to worry excessively about the threat of a strong takedown, Adesanya is in a good position to utilize his elite striking and win this fight by KO/TKO.

Holloway and Volkanovski are two of the toughest fighters in the UFC. Holloway and Volkanovski have only been finished a combined two times in 54 total fights, and neither fighter has been finished recently. Volkanovski’s last loss via finish came in 2013, with Holloway’s last loss via finish coming in 2012. Holloway has an iron chin and his ability to eat punches without it affecting him is remarkable. 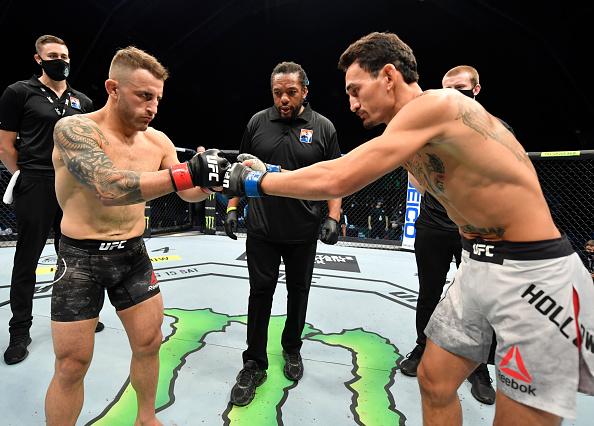 Opponents Alexander Volkanovski of Australia and Max Holloway face off prior to their UFC featherweight championship fight during the UFC 251 event at Flash Forum on UFC Fight Island on July 12, 2020 on Yas Island, Abu Dhabi, United Arab Emirates. (Photo by Jeff Bottari/Zuffa LLC)

Two of those fights were head-to-head matchups. Each of those fights went to decision, and this fight has the makings of another close affair that goes the distance. In 50 combined minutes between Holloway and Volkanovski, there have been zero submission attempts and zero knockdowns. 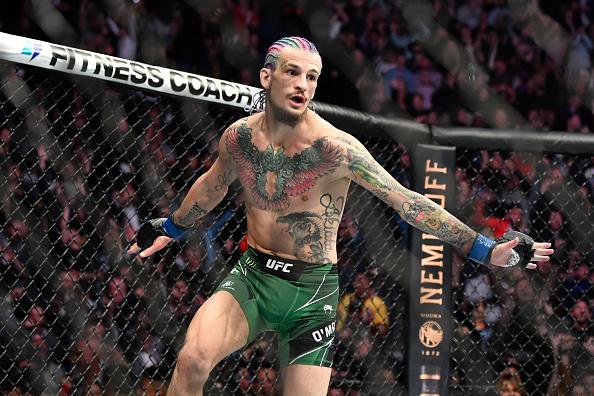 Munhoz is very tough. In 27 career fights, he has never been finished—all seven of his losses are by decision. Munhoz also has alarming striking metrics. Munhoz has absorbed over six significant strikes per minute, a big number. He has a negative strikes landed to absorbed ratio, which is also a red flag.

O’Malley is significantly longer and will have a large seven-inch reach advantage. O’Malley is in an excellent position to pick Munhoz apart from distance with his superior volume striking and win a decision.

Holloway’s striking volume has led to explosive fantasy production in each of his last two fights, scoring an obscene 209 DraftKings fantasy points (DKFP) two fights ago and 153 DKFP in his most recent fight.

Holloway has not been able to launch heavy volume in either of his previous two fights against Alexander Volkanovski, but the possibility for heavy striking volume still exists, especially since this fight has the makings of another five-round battle. The fight going the full 25 minutes gives Holloway extra time to land striking volume and score fantasy points.

MORE: Adesanya: 'I Want To Do Something Spectular' | Holloway Expects The 'Performance Of A Lifetime' | Uriah Hall Is Far From Being Done | Cannonier Wants To Be One With Everything

Holloway is the underdog in this fight on DraftKings Sportsbook, but he isn’t that big of an underdog (+155), and he has a realistic chance to win. At $7,200, Holloway is the fifth-cheapest fighter on the slate and is worth plugging in as a value play with big upside.

The main DraftKings fantasy UFC tournament has a massive prize pool of $800,000 this week, with the winner getting $200,000. Enter the contest for only $25 here.